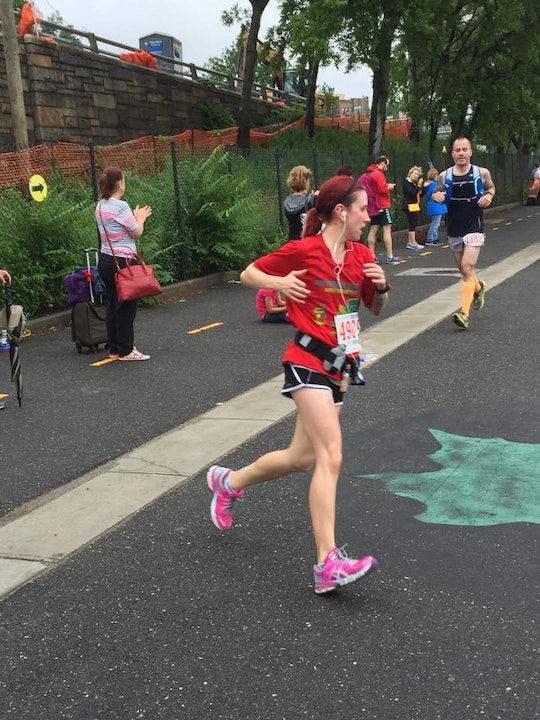 How Running Saved My Life

My running “career” started as a fluke, a true chance encounter, when my dear friend invited me to participate in Tough Mudder, an endurance event series which includes 10 to 16 miles of running and obstacles ... military-style obstacles. The event wasn't quite a run or a race, but it's been dubbed as the self-proclaimed “toughest” event on the planet. (The damn thing came with a death waiver I had to sign.) And I jumped right in. After years of struggling with my own health, with the loss of my dad, with depression and anxiety, with a crumbling, collapsing marriage, I needed to do something that would make me feel alive. I needed something that would remind me of the fire burning boldly within. And so I started running, to find myself and to save my life.

When I was 13 years old I was diagnosed with a heart murmur. It was innocent, thankfully, and to this day still is, but during a routine checkup my cardiologist also discovered I had small curve near the base of my neck. He said it didn’t look too severe, but it was undoubtedly scoliosis. He suggested my mother take me to an orthopedist, which she did, just four days after my 14 birthday. After a series of x-rays and a brief physical exam, I learned I had two curves: a thoracic curve — or scoliosis of the mid-spine — and a lumbar curve — scoliosis of the lower spine. The lumbar curve was the problem; the lumbar curve was a point of major concern because it was 54 degrees. And even though "[two] percent to [three] percent of Americans ... have scoliosis, less than 0.1 percent have spinal curves measuring greater than 40 degrees." A 54-degree curve it meant surgery was more than probable, it was inevitable. But first they wanted to try and stop the "growth" of the curve. My doctors reasoned that even though they couldn't cure it or fix it, they could keep it at bay. For the course of the next year, I wore a back brace: a large, hand-cast fiberglass case that covered my entire torso and suffocated every inch of my 5-foot frame, from my armpit to the top of my pelvic bone. I wore it 16 hours a day for several months before I started taking it off at night and stowing it in my locker at school. (The nickname "Quasimodo" won’t help you make friends in high school.)

Just three weeks before my 15 birthday I endured an eight-and-half hour operation. My lower left rib was removed and ground into a paste of sorts and used, along with five screws and one steel rod, to fuse my spine. The hope was the rod would support my spine as it fuzed and that the fusion and immobilization would stop the curvature's progression. The hope was this surgery would correct my curve, at least by 50 percent.

Ironically enough, the things I hated about running — the pain, the aches, the heavy chest — became the things that captivated me. All that pain proved I could do it.

A year later, at 16, I was diagnosed with depression. By 18, I was a jobless college dropout, and by 25, alcohol and addiction both played a prevalent role in my life. I was physically broken, emotionally destroyed, and mentally unstable. I was a wreck in every sense of the word. It was then that my friend tempted me with a Tough Mudder. I was at my weakest and most vulnerable, but when I started training I found my strength and my stride. I felt more human that I had in years. In short, I felt like me.

I ran my first "training mile" through the suburban streets of Philadelphia. I struggled to breathe, my feet throbbed, and my calves ached. What the hell was I thinking? But even though I berated myself, I also pushed on. One mile turned to one-and-half and then two, and before long, two became three. Before long, I was running. And I loved it.

Ironically enough, the things I hated about running — the pain, the aches, the heavy chest — became the things that captivated me. All that pain proved I could do it. I could carry myself and take care of myself. The aches made me aware of my strength at all times — a strength I didn't know I had — and my labored breath reminded me I was alive. I wasn't perfect, and my depression often left me paralyzed, but I was breathing. I was alive.

Before long, I wasn’t running to overcome my past. I was literally running toward my future. I was running to save my life. Running gave me an outlet to express myself, a way to find myself, and a way to prove to myself I mattered. Between my father's death, my depression, my surgery, and my collapsing marriage, I needed something solid. Something consistent. Something stable. Running became that anchor. A safe space. A quiet space. An empowering space. It was the one place where I knew I could whatever I set my mind to. I was good enough, strong enough, and confident enough when I was running.

I run to feel strong and capable. I run to heal my mind and soothe my soul, and I run to remind myself I am alive. And with depression, I need that reminder.

Even after all these years, I've yet to find one incident running cannot help me through. Has it cured my depression or taken my physical pains and ailments away? No, but running has saved me. On days when I've felt like giving up, I lace up my shoes and sprint out the door. I’ve run with braces on my ankles and medical wraps on my legs. I’ve run with tears streaming down my face. I’ve run with a severely contused knee — and kept running until I reach my 18-mile goal — and I've run four races in four days (a 5k, 10k, half marathon, and full marathon). Running is my sanity. If I stop running, it hurts more — not physically, but spiritually and mentally.

I run to feel strong and capable. I run to heal my mind and soothe my soul, and I run to remind myself I am alive. And with depression, I need that reminder. I need to know it because sometimes that sinister little voice in my head tells me otherwise.

Running has given me courage to fight for myself, and for my life. It's enabled me to fight my depression more effectively and it's given me the fortitude to fight for my marriage. It's granted me strength — the strength I need to fight the negative demons in my mind, the ones who tell me I am a failure and fill me with self-doubt. The faster I go, the louder they scream, but they can't catch me.