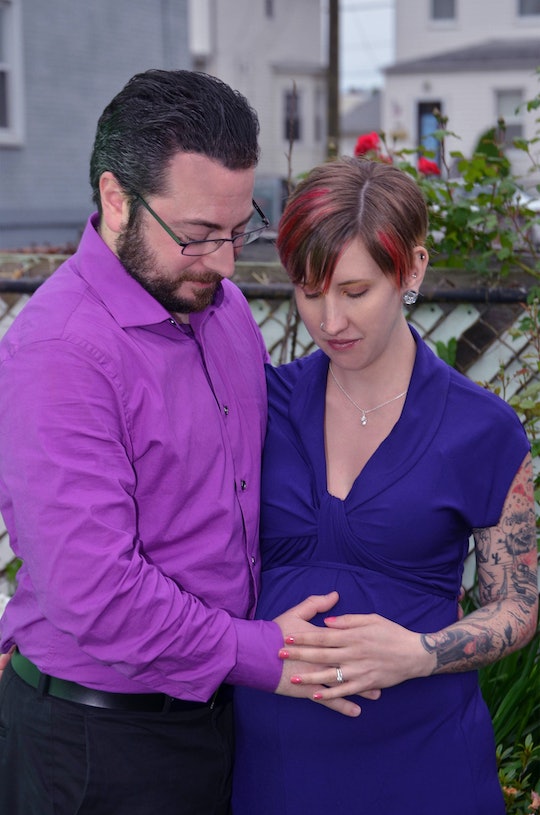 We Had A Baby To Save Our Marriage & Here's What Happened

When I turned to my husband after five years of marriage and 11 years together and said I was ready to have a baby — or more accurately, that I was ready to start trying — I had an ulterior motive: I was doing it because I wanted to save my marriage. Admitting that out loud (uh, typing that?) is a truth that I've readily avoided for more than 37 months, namely because I didn't want to admit that I had a baby to save my marriage. Giving birth to my daughter wasn't ever a mistake, and I don’t want her to ever think she was one, but she was the product of a strange and stupid decision at the time. Telling my husband that I wanted a baby felt like the only thing I could do to save us, and even though I suggested it, I didn't really know if it would work.

My husband and I have a long history. We met in seventh grade, started dating during our senior year of high school, and soon shifted from hand-holding sweethearts to a true-love college couple. We lived together by the time we were 19, got engaged at 21, and we were married by 23. And we stayed there — married,without children — for many years, and for a multitude of reasons: our jobs, our lifestyles, our lack of a three-bedroom, two-bath home (complete with two-car garage, oversized backyard and a white picket fence — ah, dreams!). But the main reason we stayed childless was because we weren't really ready for what came next.

As I write this, I can't help but feeling I'm doing a disservice to my daughter. Maybe I am. But there was nothing more right than the arrival of my daughter. The moment they placed her in my arms I knew that she was the smartest decision I'd ever made. In a sea of her parents wrongs, she was so, so right. She was the best mistake we'd ever made.

I just had all the wrong reasons for making it.

Over the course of our 11-year history, my partner and I had both changed. I became pensive, angry, and reclusive as the years went on. I struggled with jobs, with school, with the ever-daunting question: What do you want to be when you grow up? I struggled with body dysmorphia and an unmedicated and unmanaged mental illness. My husband’s once-adorable sense of humor turned mean, judgmental, and malicious. He struggled with his anger. He struggled with alcohol. For awhile, we both did. Alcohol became the way I self-medicated and it became an addiction for him.

The more we struggled individually, the more we pulled away from each other. The angrier he got, the more withdrawn and depressed I became. It didn't take long for us to morph into nothing more than two broken strangers living in the same house. We were two broken strangers trying in vain to find ways to make ourselves — and our marriage — whole. We'd taken vows and with each passing day, we struggled to find their meaning.

But when a chance job opportunity arose in a new state, we packed up and moved in an instant. Doing such forced us back together because we only had each other. We were forced to face what had made us fall apart.

After we'd moved, I was 28, unemployed, and wandering around a new city filled newfound hope. I wanted to believe we could save what had broken, I just didn't know how. As individuals, the move had helped us both find individual happiness. I am transient at heart, and bitten by my wanderlust urge. A new city gave me time and space to breathe as well as a new world to explore. My husband, on the other hand, was away from local haunts and not-so-positive influences. It was then that I started thinking about a kid. I assumed that a pregnancy would mean his drinking would get better, I'd grow mentally stronger, and to top it all off, I had the time to care for a child.

I felt like this was our time. This was when things would get better. We'd get better if only — if only we were complete. A baby would make our house a home. And so we started trying, expecting the process to take a bit, like maybe six months or maybe a year. But it took just six weeks. And before we knew it, I was pregnant. Before we knew it, baby was born.

Shockingly enough, our baby didn’t fix us. Yes things got better ... for a bit. During my pregnancy, my husband and I rekindled the feelings we'd lost for each other and our union so many years ago. He looked at me with a loving gaze instead of the bitter, resentful one I'd come to know. We went on dates. We spent time together. But even though we were better, we were far from OK.

After baby was born, I retreated to one corner — a babe on my breast and tears pouring from my eyes — and he to another. He went back to the bottle and my depression shifted to paralyzing postpartum depression. I spiraled out of control.

I know children cannot fix their parents. I know children aren’t objects or pets or things you buy to try and fill a hole in your heart. I know that for most people, children complement a marriage. They don't make it. I knew it then and I know it now, but I still hoped beyond hope that we would be different. That we had a chance.

Our problems continued well into our first year as parents. We couldn't shake the cracks that threatened to fold in on us. We fought constantly, as unhappy with ourselves as we were in our partnership.

The day after our daughter's first birthday — a date that I'd long hoped would mark a celebration for us too, not just as parents but also as "survivors" — I placed my wedding ring on the table near his side of the bed and I told him what I'd been so terrified to say for so long:

I couldn't do it this any longer.

We had finally broken. Finally shattered. A baby couldn't save us. Not even we could save us.

That was a year ago. Since then we've mended. Been honest even when it hurt. Gotten the help we needed. Given each other the support we'd so long denied. We fought like hell to stay together, and every day we fight a little more.

I realized my daughter isn’t the reason my husband and I work today (though I would be lying if I said she wasn’t a motivator). We work because we got help. I sought help for my depression, my own anger, and my struggle with self-esteem. My husband sought help for his addiction. (He's one year sober, and counting.) Getting help gave us the opportunity to come together as two whole, complete people. We were armed with the tools and words and phrases we needed to help us get through the tough times and the even tougher times. Our daughter didn't exactly save our marriage, but she did help save her parents. And we owe her everything.