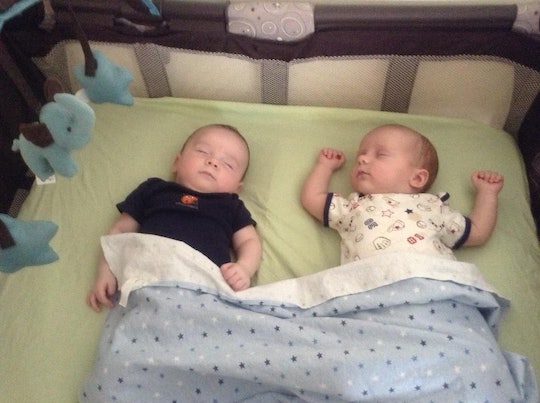 Once you’ve been a parent long enough that Facebook sends you memory statues of back when your baby was still an actual baby, you reflect back on things you wish you'd done differently as a parent. For me, I would've stressed a lot less about my kids hitting their monthly milestones and took more pictures of myself with them as infants. I also should've done my body image a gigantic favor by throwing the scale out of the house the day we brought the twins home. But there’s one choice I made as a new mom that I still stand by almost four years later: how over the top and strict I was about my babies’ nap schedule.

As a stay-at-home mom to twins, I quickly learned that there wasn’t much I could control. The babies called the shots like teeny tiny lords of the nursery and I was the hired help, only in dirty yoga pants and a milk-stained t-shirt instead of a spiffy uniform. When they were content, I felt like my heart could burst with love, but when they had simultaneous diaper disasters, or puked on the cat (who then puked himself), or cried and I couldn’t figure out what they wanted or needed, I felt like one huge sinking failure on the sea of motherhood. With my partner working full time and all of our friends and family at least an hour’s drive away, the only time I had to catch my breath or pee alone was when the babies napped.

I know all parents think their kids are geniuses in training, but I’m not exaggerating when I say my kids are fantastic nappers, and have been that way since birth. It’s just that they’ve got what I like to call a touch of the Grande’s around nap time. Like Ariana, they’re at their best when certain conditions are met. As long as I provide them with a soft, flat surface, a dim room, and white noise, they nap like champions.

If one twin falls asleep in the car and the other doesn’t fall asleep until you get home, that meant I was going to have a crappy night, and none of my friends were going to have to deal with the fall out except me.

We'd fallen into the accidental habit of co-sleeping at night and while my husband and I had mixed feelings about having the babies in our bed, I absolutely loved napping with them during the day. The fact that the boys needed me to lay down with them in order to fall asleep gave me an excuse to relax without feeling guilty. Instead of trying to run around the house and clean up or workout during nap time, I’d wait for them to drift off and then run downstairs to make myself a bag of popcorn. Then I’d tuck myself back in between them, pop on a pair of headphones and re-watch old episodes of Gossip Girl. I had zero mom guilt because my babies were happy laying with me, and getting my solo downtime recharged my batteries so I was more patient and loving with them when they woke up. My partner was more than happy to join us on the weekends because he, too, craved some time to simply relax.

I felt guilty for not going to see my friends more, but also felt like I had to do what I needed to do in order for both of my kids to get the rest they needed and to give myself the much-needed solo time I craved.

The only problem was that our friends and family thought our nap-time routine was beyond ridiculous. If one of my friends called and asked if I wanted to drive down for a playdate, I said no a lot because either the driving or playdate itself would fall during a nap time. Their babies all napped in the car, and they couldn’t understand why mine couldn’t do the same. But I had twins, while they all had singletons. If one baby has a funky nap time one day, you can recover. If one twin falls asleep in the car and the other doesn’t fall asleep until you get home, that meant I was going to have a crappy night, and none of my friends were going to have to deal with the fall out except me. I love my friends, but spending a couple hours with them while we all talked about our babies wasn’t worth missing my mom break for the day.

I couldn’t see why we couldn’t just talk to each other via text or FaceTime while the babies all napped in their own homes, this way we got to reconnect and I didn’t have to cope with cranky babies. As our kids have gotten older and now only nap once a day, it’s easier for us to get together, but back when my sons were infants it was hard on my friendships. I felt guilty for not going to see my friends more, but also felt like I had to do what I needed to do in order for both of my kids to get the rest they needed and to give myself the much-needed solo time I craved.

I ran into the same problem with my own family. I come from a big Italian brood, which means Sunday family dinners take place around 2 p.m. Before I had kids, this was great, and my partner and I would periodically drive down for a mid-afternoon plate of pasta and to catch up with my aunts and all my cousins and then come back home to get ready for the workweek. But once we had kids the pressure to come down for these dinners increased, because everyone wanted to see and spend time with the babies.

I know it hurt my family and they felt like I was trying to keep the kids from them, but it wasn’t about them at all.

The only problem was that these mid-afternoon affairs meant driving or being at my mom’s during nap time. We tried it a few times, taking turns laying down with the boys and eating in shifts, but no one was happy. My family was frustrated that we wouldn’t allow the babies to stay awake and visit with everyone. They even made jokes about going into the bedroom to “spring the babies from jail,” or would come in to “check on us,” and feigned surprise when the babies woke up as the door opened. (Nice try, Grandma.)

Beyond that, my family has two volumes: Why Are We Screaming? and Yankees Just Scored!, so trying to get the boys to settle down there was practically impossible anyway. We declined these invitations more than we said yes on the grounds that it was just too hard to get the kids to nap away from home. I know it hurt my family and they felt like I was trying to keep the kids from them, but it wasn’t about them at all. It was about trying to prevent the kids from falling off the same sleep schedule or having a meltdown that would take me down with them.

I don’t regret doing what I needed to do as a new parent when it came to my kids’ nap schedule, but I regret not being more honest about why we were doing it.

We stopped co-sleeping when the boys were 1-and-half years old but maintained our policy of always coming home for naps, and they are still awesome sleepers. At 3-and-half, my kids ask to take their nap and often beg to go to bed before it’s even time for their bath. They love to tuck themselves in and sometimes chitchat to each other for a while after lights out, but unless someone gets sick I say goodnight to them at 7:30 and don’t see them again until the morning. Perhaps we’re just lucky, but when I hear friends whose toddlers and preschoolers didn’t have a structured nap schedule complain about how long their kids take to go to bed, I can't help but think our strict nap rules helped us get to where we are today.

I don’t at all regret holding my kids to a strict nap schedule. They have a great relationship with sleep now and I think establishing a nap routine early on helped that happen. That being said, I wish I had been more open with my friends and family about why I was such a Death Eater when it came to nap time. A lot of resentment and hurt feelings probably could have been spared had I just been honest. I don’t regret doing what I needed to do as a new parent when it came to my kids’ nap schedule, but I regret not being more honest about why we were doing it. As a new mom, it was important for me to come across like I knew what I was doing. Keeping my kids on a strict nap schedule helped them be well rested, but it also allowed me some much needed time to myself. I think my friends and family would have supported my motives had I trusted them enough to tell them.