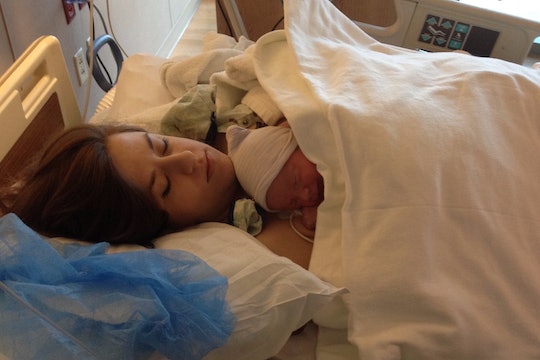 I Wasn't Able To Hold My Baby After He Was Born, & Here's What That Felt Like

Every pregnant woman dreams about what it'll be like to give birth, but nobody ever wonders what it'll be like when you're not able to hold your baby after birth. No one plans for that. From the moment I saw our child’s first sonogram, I spent countless hours wondering what my baby would actually look like. I wondered if my son would have my husband’s nose or my eyes; I lost sleep thinking about whether he’d have brown hair or blonde. Though I was no different from most women in the ways I daydreamed about my future child, there was one thing in particular that left me feeling like an outsider: My pregnancy was high risk.

I knew that my pre-existing health conditions were going to be a factor throughout my pregnancy, but I never expected my birth plan to be impacted. I knew I was going to have a scheduled c-section because my connective tissue disorder made a vaginal birth too dangerous. Even though I couldn’t really “participate” in the c-section aspect, I still wanted to feel like I had some level of control in the situation. The birthing process seemed like such a sacred privilege, and I wanted that Mother-Earth-goddess-warrior moment. After stumbling upon a video about natural c-sections, I was determined to make it happen. A natural c-section is a way to integrate some of the physical aspects of a vaginal birth — such as immediate skin-to-skin contact, delayed cord clamping, and allowing the mother to see that baby being taken out —and I was going to have one. I refused to give in to the growing sense of chaos.

Whether it annoyed my medical team or not, I’ll never know, but I had quite a specific birth plan. I wanted the curtain to be lowered at the moment my son was delivered, the cord clamping to be delayed, and I wanted him immediately put on my chest prior to being washed. I wanted to have all of these things because I was still determined to have a say, and have my son's arrival be as close to the vaginal birth I'd wanted. I'd read that it was extremely important to have skin-to-skin contact while your child still had your scent on their skin, so naturally, I requested that too. But all my careful planning quickly went out the window.

I knew something was wrong even before we'd arrived at the hospital. We pulled up and I got sick directly into a bush. I felt like things were off. I hadn’t been on any anti-nausea medication since my Hypermesis Gravadarium (severe morning sickness) had finally subsided during month seven. So why was I suddenly sick again? As soon as the endless paperwork was filled out, I asked for something to calm my stomach because I didn’t want it interfering with my birth plan. Several nurses told me it was “just nerves.”

The next thing to go wrong was when a nurse blew the veins in one arm and both wrists. I’m not sure how much blood I lost, but it was enough for me to nearly pass out and for him to put a towel on the floor to sop it up. It also took them three tries to get my spinal block in. By the time I was on the operating table and the numbing began to take effect, I was a wreck.

Have you ever thrown up while horizontal, strapped down, and numb so you can’t properly feel your stomach muscles to puke? It’s not fun. I was terrified I was going to choke, and the nurse who assured me she’d be there to catch any vomit wasn’t in the room. So there I was, alone, head turned to the side, vomiting, crying, and shaking uncontrollably. That’s when I was informed by the head nurse it wouldn’t be safe to bring my son anywhere near me once he was born.

My heart broke in the most profoundly deep and painful way. I cried until I felt just as empty as my womb was about to be. Through all the health scares — a ruptured uterine cyst, bleeding, dislocated ribs and hips —I used my son’s birth as a goal to look forward to. Now it was being taken away from me and I couldn’t do anything about it. I understood that my vomiting, low blood pressure, and propensity for seizures meant it wouldn’t be safe, but it hurt nonetheless. It didn't help that the nurse who broke the news acted like she was just telling me the weather. My husband was by my side, and the mixture of helplessness and empathy in his eyes was bittersweet. He was able to stand up and watch our son be born. He was allowed to be the first one to hold him. He got to hold his tiny hand and stroke his impossibly soft cheek. Jealousy and resentment surged through me.

As my partner left with my son to be tended to by nurses, I got to watch the clock while I waited to be stitched up and moved to recovery. After what seemed like an eternity, they finally gave me anti-nausea medication since I still couldn’t stop throwing up. Their best guess at my non-stop nausea was that my my pre-existing GI situation was only exacerbated by the spinal block; they thought I’d had a bad reaction. But I didn’t care about any of that, and I especially didn’t care to hear their explanations. I just wanted my son.

Since I had multiple health issues, doctors wanted to monitor me for a bit before they brought my son in. I understood that it was important to check for signs of hemorrhaging or drops in my blood pressure, but honestly, I didn’t care about any of that. I was and still am no stranger to health problems. I’ve lived with them all my life and have learned how to just deal. In that moment all I cared about was getting to see my son. Once I finally got the all clear from someone of the medical staff, I politely but emphatically demanded they let me hold my son. The woman begrudgingly left to go send for him.

As I laid in the bed, I wondered, just like I had when I was pregnant, what his face might look like. Then, I was struck suddenly with an irrational, yet very real, fear my son wouldn’t want or be able to bond with me. I hadn’t held him after his birth. I hadn’t even known him yet. Would he recognize me? Would he know who I was? The second hand on the clock seemed deafening as I anxiously waited for him to arrive. I felt cheated because, technically, he’d already made his arrival. The world got to welcome him while I waited like a groupie hoping to get backstage.

I don’t care how cliche it sounds, but something truly amazing does happen when you finally get to hold your child. A nurse wheeled him in and my husband held my hand as she laid my son on my chest. I tried as best as I could to control the shaking caused by my reaction to the spinal block and anesthesia and put every ounce of energy into tuning out the cries of my own body. Nothing mattered in that moment. Nothing but him.

The pain, the nausea, the bitterness, it all washed away — albeit temporarily — when I felt his warm face pressed against my skin. Like magic, his biological instincts kicked in, and he started scooching himself towards my breast. His tiny cries punctuated by grunts of effort melted my heart as he nuzzled contentedly into me. And I got to cry tears of happiness for the first time that day because my fear was proven wrong: my son knew exactly who I was, and even better, he needed me.