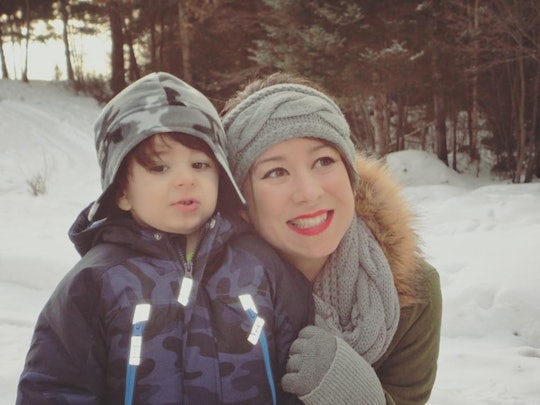 I'm A Proud Mom, Thanks To Planned Parenthood

I'm turning 30 this year, a milestone that tends to usher in an insatiable need for introspectiveness and nostalgia. In looking back at my 30 years of life, it's easy to realize how lucky I've been. That realization pushed its way to the forefront of my mind on Thursday, after House Speaker Paul Ryan promised the GOP would pull all Federal Funding of Planned Parenthood as part of repealing the Affordable Care Act.

Every year, Planned Parenthood services a reported 2.5 million women (and men), providing a wide range of care. Its services include breast and cervical cancer screenings, comprehensive prenatal care, birth control, counseling, STD testing and treatment, and HIV testing. Yet despite providing these essential healthcare services, during a weekly news conference on Capitol Hill House Speaker Ryan promised the GOP would defund Planned Parenthood as part of the impending repeal of Obamacare.

“Planned Parenthood legislation would be in our reconciliation bill," Ryan continued, a political move mirroring the 2015 Defund Planned Parenthood Act, which would've put a one-year moratorium on federal funding for the organization had President Barack Obama not vetoed the bill.

The defunding of Planned Parenthood (and any other women's healthcare organizations that provide comprehensive reproductive care) is particularly appalling to me because my life would be exponentially different if places like Planned Parenthood didn't exist. When I went to Planned Parenthood to get an abortion, I was a recent college graduate in an unhealthy relationship, living paycheck-to-paycheck. When I found out I was pregnant, I'd been dating my then-boyfriend for over a year, enduring countless nights of pointless drinking and volatile arguments in the hopes our faltering relationship would magically improve.

I knew I couldn't be a mother. I wasn't mentally, emotionally, or financially capable of being a mother. If I tried to be a mother, my life, as well as the future life of any child I brought into the world, would be significantly and negatively impacted.

The moment those two parallel lines showed up on a pregnancy test, I knew I had to call Planned Parenthood. (In the end, they were my third call, behind my best friend and my then-boyfriend.) In all honesty, I had no idea where else to turn. My OB-GYN didn't provide abortions, and Planned Parenthood was public-facing enough that I knew it would be safe to have an abortion there. I knew I couldn't be a mother. I wasn't mentally, emotionally, or financially capable of being a mother. If I tried to be a mother, my life, as well as the future life of any child I brought into the world, would be significantly and negatively impacted.

A few weeks later, I walked into a Planned Parenthood clinic no more than five minutes away from my apartment, where I had a safe, legal, and affordable abortion. Little did I know that the choice to end one unintended pregnancy, would be the catalyst for seeing another one through and becoming a mom.

A week after my abortion, my then-boyfriend and I broke up. I ended my post baccalaureate teaching program to be a middle school English teacher and started writing, a career move that would one day send me to New York City as a full-time writer and editor. I started demanding better for myself in all areas of my life, taking advantage of the fact that I was in control of my body, my future, and the unapologetic way I chose to live.

Three years later, I met my partner. Six months after we started dating, I stared at those same parallel lines on a pregnancy test that wasn't unforgiving, but celebratory. The sense of doom and overwhelming fear I felt once before, were nowhere to be found. I was going to be a mom.

Thanks to Planned Parenthood, I know the difference between forced incubation and motherhood. I'm now able to look at my son and tell him he's a choice, not a consequence.

Unlike the unplanned pregnancy I terminated when I was 23, I knew that I was capable of providing my child with a safe, stable, and healthy life. The feelings of dread and fear were nowhere to be found. I knew my relationship would be enriched by the birth of a child, not solidified as an inescapable reality. I knew I could maintain my sense of self, continue to thrive in a fulfilling career, and remain financially stable. The feelings in the base of my gut that told me procreating at 23 would be a massive mistake, were now telling me that being a mother at 27 would be the right life choice.

Planned Parenthood isn't the only organization that provides abortions (and a myriad of other crucial reproductive health care services) to women like me, but it's the one that looms largest in the public imagination. Make no mistake, if Planned Parenthood is stripped of its federal funding, a dangerous precedent is set, which will enable the United States government to penalize organizations for providing legal abortion services. In 2011, there were 553 abortion clinics in the United States; since then, 162 have closed. Between 2011 and 2014, state lawmakers enacted 231 abortion restrictions. If a well-known healthcare organization like Planned Parenthood isn't safe, who is?

Thanks to Planned Parenthood, I know the difference between forced incubation and motherhood. I'm now able to look at my son and tell him he's a choice, not a consequence. Because I had the ability to choose when I carried, birthed, and raised another human being, I can proudly say I'm the mother my son deserves, not a woman with a child she was forced to have. I am able to give my son everything he needs, and more than a few things he wants.

If it weren't for the abortion I had at 23, I wouldn't be a mother at all. I would be a woman trapped by circumstance; unhappy, unfulfilled, and incapable of providing the things every child needs, including the peace of mind that comes with knowing they're loved and wanted.

So yes, I am lucky, but a woman afforded the opportunity to write her own life story shouldn't be considered "lucky." It should be considered an inalienable right, not a privilege, for women to have control over their own bodies and to make the same choices I did. That right shouldn't be impeded by financial circumstance or where you live, which is why Planned Parenthood and similar organizations are so vital. Living your life the way you want and deserve to shouldn't be "lucky." It should be inevitable.