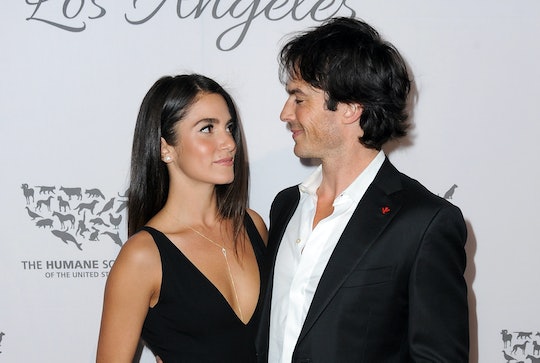 Ian Somerhalder and Nikki Reed broke their one-month media break after the birth of their daughter this week and appeared on a podcast together. While talking to Dr. Berlin's Informed Pregnancy podcast, they shared a story about how they decided to have a baby, which included a story about Somerhalder tossing out Reed's birth control pills. After hearing that, people were understandably concerned, which led to Ian Somerhalder and Nikki Reed explaining their birth control comments in a joint statement on social media.

Somerhalder and Reed were asked to share how they knew it was time to get pregnant and Ian told a story about being in Barcelona with another couple on vacation. They and their friends were joking that they wanted to have kids around the same time so that they would grow up friends. Which, Somerhalder recounted, led to Somerhalder going through Reed's purse and flushing her birth control pills down the toilet.

"It was the beginning of the pack, so I had to pop all those suckers out," he said. Reed laughed and joined him in retelling the story, noting that she was "freaking out" while their friends took a video of the whole scene. “Actually, now thinking about it, I guess I kind of decided [to start a family]," Somerhalder said.

People were taken aback by the story, since throwing out a woman's birth control is a form of domestic violence. It's abuse. Somerhalder and Reed had no idea how it sounded to the general public though when they told the story to Dr. Berlin. On Saturday they said in a statement:

We never expected a lighthearted interview we did poking fun at EACH OTHER and how WE chose together to get pregnant, a goofy moment in Barcelona with our two best friends and the anticipation of the start of our journey together as we went from two to three, to turn into something representing a very serious matter.

However, if this somehow sheds light on a topic that definitely needs mainstream attention, then we are grateful for the unintended consequence. It’s a shame that outlets chose this as their way into a very serious discussion, as we are certainly not qualified to be the faces of this topic.

From their statement, it seems that Reed and Somerhalder felt the moment was consensual, although in the podcast, Reed says that she was having a panic attack watching him flush them down the toilet. But she obviously doesn't look back on the episode as abuse.

However, reproductive coercion is a serious issue. According to Planned Parenthood, 15 percent of women who report intimate partner violence also report reproductive coercion, which can be anything from tampering with birth control methods, removing a condom during sex, or even forcing someone to terminate a pregnancy. It happens all the time.

It's good to know that Reed wasn't a victim in this case. It's also good to know that so many people took to Twitter to call out abuse when they saw it and even question the host of the podcast, Dr. Berlin, for not recognizing abuse when he heard it. That Somerhalder, or Reed, didn't interject in the original telling of the story and make it clear that this was a "lighthearted" and fun moment in their relationship speaks to how little so many people know about domestic violence.

Which is why it wasn't "a shame" that the media called Somerhalder out for his behavior, if anything, it was a way to inform both the couple and the general public that usually, throwing out someone's birth control is abusive behavior, and should always be questioned, no matter how famous someone is.