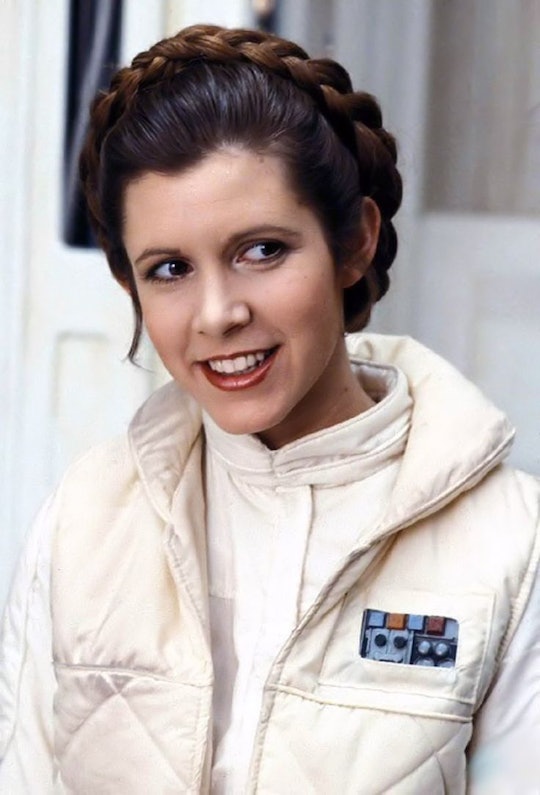 Carrie Fisher was known for many things. She was an author, an actress, a noted Hollywood script doctor, and a mother. But the role that initially catapulted her to notoriety over 40 years ago was that of Princess Leia in the original Star Wars trilogy. A beloved epic adventure enjoyed by generations of kid and adult fans many times over, Fisher's character set the precedent for scores of strong female characters in the decades after the first film's 1977 release. A collection of Carrie Fisher's most iconic Star Wars scenes prove why her character was always a fan favorite.

While everybody knows that Luke Skywalker is *technically* the protagonist of the original trilogy, he wouldn't have gotten anywhere without Han Solo and Princess Leia (not to mention Chewbacca, C-3pO and R2-D2). In fact, Rebel Leader Leia was technically the one who jump-started the entire adventure that set Luke on his heroic journey, sending R2-D2 with the Death Star plans to Obi-Wan Kenobi shortly before her capture by Imperial Forces led by Darth Vader. Leia continued to be a total, delightfully snarky badass for the remainder of the movies, eventually returning in 2015's Episode VII: The Force Awakens as a General of the Resistance.

Between Leia's memorable one-liners, her incredible chemistry with Harrison Ford's Han Solo, and every single time she basically saved the day, here are seven of Fisher's best scenes as Princess Leia.

Arguably the most feared person in the galaxy captures her, but does the bun-rocking princess cower in fear? Nope. Leia doesn't even blink as Vader attempts to force her to admit her allegiance to the Rebellion, and she definitely doesn't give up any information about the Death Star plans.

Han and Luke arrive to rescue Leia from captivity, but she's more than a little wary about their capabilities as rescuers and eventually takes charge to get them all out of harm's way. Leia grabs a weapon and fearlessly starts firing, before instructing the group to jump down the garbage disposal. Sure, the whole garbage disposal thing didn't wind up being such a good plan in the end, but there's nothing I love more than a female character who refuses to be the damsel in distress — and that's definitely Fisher's Leia.

There are plenty of reasons why Episode V is the best of the bunch (in my not-so-humble opinion), but the increased focus on Leia (and Leia/Han's dynamic) is definitely one of them. Han and Leia get A LOT closer in the early half of The Empire Strikes Back, and partake in countless great flirty/banter-y moments.

But Han cheekily accusing Leia of having feelings for him, and Leia's classic response ("scruffy-looking nerf herder" is an immediately recognizable insult to any true Star Wars fan) is one of the greatest moments for any of the characters in any of the films. Kissing Luke to stick it to Han gets a little gross in retrospect, but overall the entire scene is truly iconic.

Leia saves her brother from certain death, thanks to the power of the Force (and maybe a little bit of good ol' fashioned twin-intuition). You've also gotta love how she wouldn't hear any backtalk from Lando — they're going to save Luke, and that's that. Leia knew when she's right, and she knew how to take charge.

Return of the Jedi is just a string of one awesome scene after the other for the Princess. Not only did Leia turn the whole damsel-in-distress thing completely on its head when she rescued Han and freed him from carbonite, she herself was captured in the process and enslaved by disgusting alien gangster Jabba.

In the end, she didn't need anyone else to save her. She killed Jabba (using the same chain he'd been using to keep her captive) and saved herself — all while wearing a very tiny metal bikini.

The love story of Han and Leia is one of the greatest in cinematic history. Their initial "I love you"/"I know" exchange, when Leia confessed her love to Han right before he was frozen in carbonite, is one of the trilogy's most memorable moments. Personally, I prefer the Episode VI version of this exchange, when Han says "I love you" back in response to Leia as Stormtroopers approach them — and Leia, ever sassy, echoes Han's earlier "I know" response.

7. General Organa In The Force Awakens

Seeing the former Princess as a General throughout The Force Awakens is awesome in its own right, but really all that's changed is her title — Leia is just as powerful and in control as she's always been in the earlier films. A particularly strong moment in the newest film found Leia silently comforting Rey after her ordeal with Kylo Ren and witnessing Han's death up close. It sort of sucks that we never have a moment to see Leia actually mourn Han's passing — besides that very brief moment of recognition when she senses from afar that Han has died — but that final wordless Leia/Rey exchange is terrific.

There are countless other incredible Leia moments throughout the films, each one made even better thanks to Fisher's perfect performance — and occasional, totally on-point script doctoring. Fisher's Princess Leia and her brutally honest and open advocacy for mental health will be missed. Princess Leia/General Organa is one with the Force now.