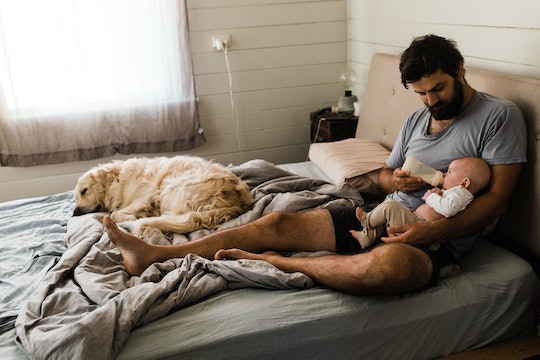 If A Job Won't Allow Dad Time Home With Baby, He Should Quit

According to a 2017 Motherhood in America report, over one-third (34%) of women do not return to their job once they have a baby. Women are regularly discriminated against because they can get pregnant and may request maternity leave, decide to leave their job, or both. We have wrung our hands as a society over how to right this bias; how to tinker with our soft assumptions about women in the workplace. Here’s an idea, though: If dads quit their jobs or threaten to quit their jobs because of unpaid leave, it gives businesses one less reason to discriminate against women. Paid family leave is about civil rights and family values. In short, dads have to quit their jobs, too, for paid family leave. It’s the only way this works.

In Sweden, 85% of Swedish fathers take parental leave. Indeed, according to a 2010 New York Times article, Sweden reserves at least two months of its 13-month paid parental leave program exclusively for fathers. It has resulted in lower divorce rates and increased salaries for women. The paid family leave policy has been the law in Sweden since 1974, when it became the first country to replace maternity leave with parental leave.

Remember, life is about your family, your team, your pride (of lions, not ego), your unit, your tribe, your clan. Work is meant to enhance (and make possible) that principle. But if we truly want equal rights, we, men, have to do our part and be as tough as the moms.

I appreciate that people are rightfully concerned for their career trajectories, but please keep in mind the following. According to an ancient study from the Bureau of Labor Statistics conducted in 1986, the worklife expectancy for men was 38.6 years and 29.4 years for women in the late 1970s. Of course, these days we will work from as early as possible to our graves, with no time off, but plenty of debt.

In other words, your career can and will survive. You’re unlikely to be blackballed. You will get another job. Like Lebron James, you, too, can take your talents elsewhere.

Men could simply refuse to work for a single day, across the nation.

You may not get as good a job when you return to the workforce. You will probably be replaced. But, remember, no one is irreplaceable. When you retire, if you retire, there will be someone to take your job, the machine will keep rolling. But you and your family will also survive and probably thrive from taking some time off together at this most pivotal of points in your life.

A shrewd employer may look at a person who quit their job and paid for their own paid family leave as a trailblazer, a pioneer — a person who lived their values, demonstrated leadership, and is confident in their talents and abilities. Employers, therefore, have a vested interest in keeping their employees.

The only viable remedy, however, that will make a difference and strike fear in the hearts of any employer is simply not showing up to work. A boycott. A sit-in. A protest. Whatever you would like to call it, men across the nation could simply refuse to work for a single day. The message would be loud and clear. One would be putting the boy in boycott, if you will. Just the lead up to a national boycott in the United States would get more coverage than Brexit. This is because markets and businesses expect women to quit, but they don't expect men to quit — and they reward men for that assumption. By upending this custom and tradition, employers would be aghast.

Who, pray tell, is going to pay for this? You. If neither the government, nor employers pay for family leave, then you should pay for it yourself. The good thing about pregnancy is that, for the most part, the baby’s birth is not a total surprise. Arguably, you have between six and nine months to prepare for the baby’s birth, so you could save for your six-month babe-cation. If you have a baby registry, or organize a baby shower, you can ask guests to chip in. You could save a portion of your salary, the way you’ve been saving for a down payment for a new home.

Because this is America, the entire babe-cation can probably be financed with a credit card and/or loan, too. These days you can finance your wedding, your car, your education, your medical needs, desires, caprices, and teeth, your tattoo, Airpods, and your Mac (and every other single Apple product), as well as your vacation and your honeymoon. If you’re a start-up with negative income, you, too, can finance your business. So, you could also borrow and finance your own paid family leave.

The point is that it makes good practical, economical, and societal sense for paid family leave, but it’s not going to happen through government. The impetus must come from us, moms and dads taking the same, real risks.

Markets and businesses expect women to quit, but they don't expect men to quit — and they reward men for that assumption.

I have my own business and so does my wife. When our baby was born, my wife kept working. I didn’t take on new clients. In one month, I did not generate a single dollar. My business suffered. But, the experience was one of the most rewarding of my life. It made our marriage stronger. It taught me that the sun always rises the next day. My bond with my child, and my wife, is unbreakable. We, as a family, are complete.

It’s from that vantage point that I say the few dollars you will make by not taking time off to be with family are inconsequential. And I say “few dollars” when compared to the grand scheme of things. All the money that one will make throughout an entire career.

At the federal level, we have the Family and Medical Leave Act, which Congress passed in 1993, after a decade of advocacy. It offers 12 weeks of unpaid, job-protected leave to care for newborns or seriously ill family members. The law does not cover companies with fewer than 50 employees. As a consequence, most workers have no access to the benefits provided by the law.

Paid family leave programs in other states appears to have had few costs to employers and have instead resulted in substantial benefits. According to one study, in Connecticut, it took employers at least six weeks to search for replacements. The estimated cost to replace a worker varies widely from anywhere between $2,000 and $14,000. The study also noted that most employers simply will not replace the worker. Importantly, the study notes that 99% of employers reported an increase in employee morale. Eighty-seven percent of employers indicated that the paid family leave program had not caused costs to increase.

Government also has a vested interest in making sure that we are working. If you quit your job, you’re paying less in taxes and asking for more in benefits, and if we are all in that position (men and women alike), politicians’ lives become more difficult because they have to maintain the status quo with less, which ultimately threatens their most important priority: their own careers.

But if businesses are at risk because men are also quitting their jobs to stay home during the first few months of their babies’ lives, businesses will lobby their politicians for changes to the law. Because what’s bad for business is bad for the country and even worse for lawmakers. It would also probably be lobbied for on behalf of financial services, who stand to benefit for making loans for baby-cations. And when business and finance make requests, government obliges.

We want to hear from you! To respond to a conversation in the parenting space, send your essay idea to pitches@romper.com.

More Like This
I’m Getting Dual Citizenship For My Jewish Children, Just In Case.
Baby-Led Weaning: A Comprehensive Guide To Introducing Solids
There’s A Reason Your Baby Always Falls Asleep While Breastfeeding
Parent's Guide To A Baby's Dry Cough: Why They Happen & How To Treat