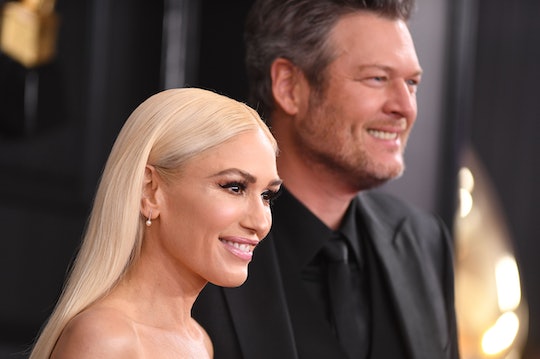 If Gwen Stefani Has A Country Accent, Then Blake Shelton Can Wear Doc Martens

I once screamed-sang No Doubt's "Don't Speak" while driving to my high school theater class' one-act play, briefly throwing off the shackles of my own brand. I felt free and alive in the knowledge that our fates are not fixed! Case in point, Gwen Stefani, who spent the '90s topping the charts with platinum rockabilly hair and her belly button permanently on display, sounded like she was about to fry up a chicken at the 2020 Grammy Awards. Standing alongside her boyfriend Blake Shelton on the red carpet, she had a bonafide half-Oklahoman accent and look, everyone adapts to their partner when they're in a relationship, but Stefani sounded like a main character on Dallas at the Grammys. Don't speak, girl, 'cause I don't know what you're saying. (Just kidding, I do, I'm from Georgia.)

Her partner, on the other hand, didn't sound different at all. And why? Can't Shelton — a man who once covered the song "Ol' Red," a man whose Google Image results are dominated by '90s mullets — storm the Grand Ole Opry stage in heavy black eyeliner, a pair of Doc Martens, and his normally coiffed Presley hair parted in the middle so it hangs just across his eyebrows? Just once. I want him to look like he wandered off the set of My So-Called Life. I want him to be inspired by The Craft and have just a hint of weirdo to him. I want him to smell like teen spirit. If Stefani can sound like an extra on Gone with the Wind, then Shelton can look like he scrawls Smashing Pumpkins lyrics on the inside of his Trapper-Keeper.