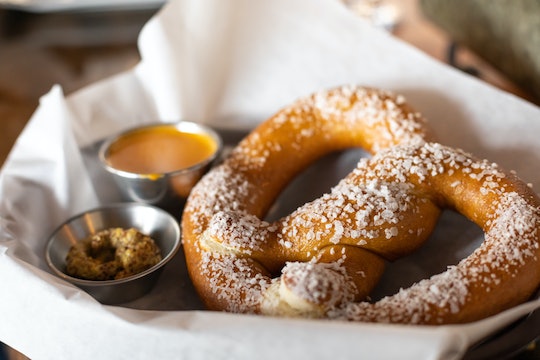 If You Have These 7 Food Cravings, It Could Be A Sign Of Anxiety

Whenever I get stressed, I crave a big bowl of popcorn with tons of salt. Really, I would just eat a handful of rock salt if it were at all socially acceptable. As it turns out, having certain food cravings could be a sign of anxiety. It's no surprise that you want these comfort foods as soon as that tension in your life starts increasing.

First, though, it's helpful to understand a little more about anxiety itself. The most common mental illness in the United States, anxiety disorders affect around 40 million Americans over the age of 18, according to the Anxiety and Depression Association of America. And it isn't simply a case of feeling nervous before a big event. Anxiety is defined as a feeling of fear or the anticipation of a future threat, according to Anxiety.org. It's no wonder people dealing with anxiety try to calm down those feelings with food.

Now, this isn't to say that it's bad to crave a salty or chocolaty snack whenever anxiety is getting the best of you. (Seriously, don't come between me and my popcorn.) But it's good to be aware of the potential connection. The next time you're drooling over the thought of a giant bag of chips, maybe take a second to assess your anxiety levels at the moment.