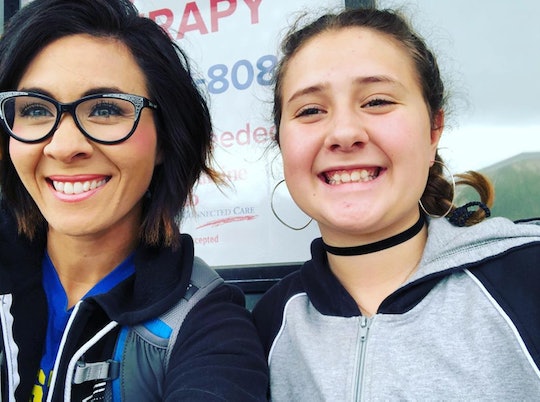 Motherhood Anxiety Is Real & *No One* Is Talking About It

I suffered from anxiety long before I had children. After I was diagnosed with Generalized Anxiety Disorder (GAD) at a very young age, it became clear that, despite medication and various therapies, my life would never be the same. Now that I'm a mom, GAD impacts me in a variety of ways. Sometimes I'm just fine, and there's no way you would know I'm constantly anxious, but other days I'm barely keeping my head above water. So believe me when I say motherhood anxiety is real, whether you see it on a parent's face or not, and no one is talking about it nearly enough. And what makes motherhood anxiety so insidious is that it's not just my wellbeing I'm worried about.

According to the Anxiety Association of America, anxiety disorders are the most common mental illness in the United States, affecting 40 million adults in the United States every year. For those of you keeping track, that's 18.1 percent of the population. They're also highly treatable, yet only 36.9 percent of those suffering from an anxiety disorder receive treatment. GAD affects 6.8 million adults, or 3.1 percent of the U.S. population, but only 43.2 percent are receiving treatment. Women are twice as likely to be affected as men. In other words, mental illnesses, and anxiety disorders in particular, are relatively common, but so many of us — especially women and mothers — are suffering in silence. I know I did, and for a very long time.

The amount of anxiety I have faced as a mother goes well beyond what I initially faced around the time I received my diagnoses. It feels as if my anxiety has reached another category entirely. Studies show there are parts of the brain that, in a sense, re-wire themselves as soon as you become a mom, too — so perhaps biology is to blame. According to The Atlantic, a pregnant woman's brain begins to change even before she gives birth. "Gray matter becomes more concentrated. Activity increases in regions that control empathy, anxiety, and social interaction. On the most basic level, these changes, prompted by a flood of hormones during pregnancy and in the postpartum period, help attract a new mother to her baby. In other words, those maternal feelings of overwhelming love, fierce protectiveness, and constant worry begin with reactions in the brain."

From biological changes in my brain to social pressures, there are a variety of "legitimate" reasons for my anxiety. And still, I remain silent.

Dr. Samantha Meltzer-Brody, from the University of North Carolina School of Medicine tells, Parenting , "Anxiety attacks can both 'come out of the blue' or be brought on by specific triggers, especially if the disorder has been present for a while and there are phobias about certain situations, like driving or being in crowds." So the surge of anxiety I feel when I drop my kids off at school, or have to take them to their pediatrician for immunizations, or when I am forced into social situations to, say, attend a school play, is also not uncommon. From biological changes in my brain to social pressures, there are a variety of "legitimate" reasons for my anxiety. And still, I remain silent. Still, I have no outlet to talk about my fears, my panic attacks, or my feelings of innate inadequacy. Why? Because our culture doesn't allow it.

When you're a mom, there's no escape from the constant worry. I feel trapped in a seemingly endless cycle of responsibilities, all ranging from relatively minor to extraordinarily important. I wake up, rush to get the kids ready for school, and the moment I drop them off I worry about their safety. When they get home, after I've finished my own work, I'm stressed out about their homework, about dinner, and about trying to connect with my kids while simultaneously crossing off a mental check list the size of Texas. Then, when it's finally time to lay my head down on a pillow I probably should have washed earlier that day, I am plagued by all the things I didn't accomplish in a 24-hour period, and my anxiety prepares for it second act of the day.

No one points out that a woman's humanity and sense of worth are diminished the moment she brings a kid into the world.

And through it all, society tells me I should be smiling. Through every up and down, every anxious moment and overwhelming feeling, I'm told to enjoy it, because "they grow up so fast." I can't complain because "I chose to be a mother" and I shouldn't speak my truth because "people have it far worse than I do." And yes, that's true: in many ways I am lucky and privileged. But our feelings are relative, and the plights of others does not diminish my own.

No one talks about the shame and stigma attached to mental illness, especially if a mom is suffering from it. No one points out that a woman's humanity and sense of worth are diminished the moment she brings a kid into the world. Are my children important? Absolutely. But you know what? So am I.

Thankfully, there are amazing resources for those of us who are struggling. There are meditations available and, of course, talk therapy. Dr. Meltzer-Brody urges moms to speak with a skilled provider who specializes in anxiety disorders, so you know you're talking with a licensed professional who understands your struggles and needs. Medication and evidence-based therapies can work wonders, to be sure, but they also require patience. Dr. Amy Przeworski, Ph.D., an assistant professor of psychology at Case Western Reserve University who specializes in anxiety disorders in children, adolescents, and adults, tells Psychology Today it's OK to admit you're anxious about something, because all parents are. Rarely, she adds, do those fears come to fruition and if they do, it's likely not as bad as you worried it might be.

But perhaps the most important thing to remember when facing, dealing with, and seeking treatment for anxiety is the following: your anxiety is real. Your feelings are valid, your experiences are not "made up," and motherhood doesn't mean you must turn into a martyr and suffer in silence for the betterment of your kids or society's unrealistic image of a parent. Acknowledging you're only human won't magically erase your anxiety, but cutting yourself the slack, and talking about it, could be one of the most significant steps on the path toward positive mental health and anxiety management.

No more silence. No more shame. No more.

More Like This
Reddit Applauds Mom Of Five Who Stood Her Ground & Left Sleeping Dad Behind
6 Mindfulness Activities For Kids
Dr. Jill Biden Just Delivered Some Frank, But Powerful, Advice On Motherhood
The Best Back-To-School Sales To Shop Right Now