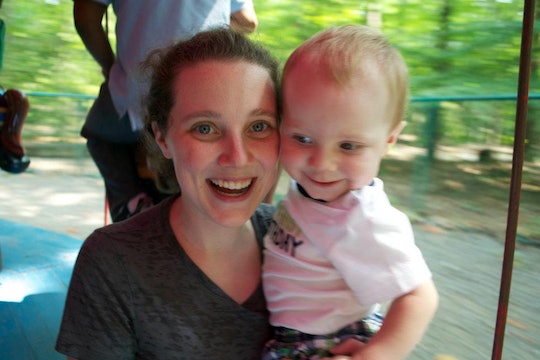 I'm A Mom With Panic Disorder & This Is What It's Like

At just 23 years old, I was diagnosed with panic disorder. The diagnosis came about during a period of change: I'd just recently graduated college, I was getting married, and I had my first real job. Panic Disorder is an anxiety disorder where you have recurrent panic attacks. According to the Anxiety and Depression Association of America, panic disorder occurs in people who experience spontaneous out-of-the-blue panic attacks. People with panic disorder are typically preoccupied with fear of recurring attacks. And when I'd first started experiencing panic attacks, I had no idea what was wrong with me. In fact, I was convinced the problem was physical rather than mental. In reality, it's both, though at the time I thought I was coming down with an acute illness or that something was wrong with me that caused me to almost pass out. My panic attacks are awful, and unless you've experienced one, it's almost difficult to understand how terrifying they are. Rational thinking doesn't factor in. No amount of being reassured that "nothing is wrong" and "everything is fine" can stop the onslaught of physical symptoms.

For me, panic attacks feel just like the sensations I have before I pass out. I get nauseous and lightheaded. My bowels are particularly susceptible to anxiety, and when an anxiety or panic attack would begin, I would inevitably need to relieve myself, which led to the not-irrational fear that I would have an accident or throw up in public. I'd hold my breath during an attack, or I'd hyperventilate, and as a result, I'd get tingly cheeks and fingers. My extremities would go cold. But the worst part was the fear that came with it. During a panic attack, my body goes into "fight or flight" and along with the huge dose of adrenaline, there's the fear that what I'm experiencing is a matter of life or death.

The good news with panic disorder is that it's treatable. With therapy and medication, I got better quickly. But I have a lot of phobias, particularly when I'm facing situations where I've had panic attacks before. I was afraid of being in the car, on public transportation, waiting in line at the grocery store, or sitting in waiting rooms. Basically, I was afraid of anywhere I might get trapped and be unable to escape. Through cognitive behavioral therapy and medication, however, I began to tackle each phobia, and my panic attacks tapered off and finally stopped.

Or so I thought.

I had my first child at 25. I'd already conquered my panic disorder and was off medication the entire time I was pregnant. But when my son was born, I began suffering from postpartum anxiety. It was different enough from my panic disorder that I didn't realize I was starting to be guided by fear and obsessive thoughts again. To a huge degree, I felt what I was experiencing must be normal. What mother doesn't worry that her child will suddenly stop breathing? Or that her child will start crying inconsolably in public or while she's driving? And then, when my son was about 8 months old, I had a panic attack on the subway. Even when it was happening, I knew exactly what it was. In some ways, that should have been reassuring. I wasn't dying; I was panicking. My fears were compounded, though, because my fear of being incapacitated was amplified by the fact that I was solely responsible in that moment for my son.

I'd go on to have more panic attacks and realized that once again, I needed more help. The decision to medicate was difficult, because I had a psychiatrist tell me I should wean my son off breastfeeding before I took anything — a fact that has been reputed by doctors I've had since. It was hard for me to realize that my latest panic attack was a recurring issue and not a one-time fluke. I had to admit that I was wired this way. I simply didn't have enough serotonin in my brain for the necessary feelings of well-being. Without medication, I ruminate on problems and my stress, and my adrenaline spikes until panic attacks leave me housebound, and, in effect, depressed.

Even when I am "well" and in therapy, I still find a lot of things difficult. I don't do well on public transportation or driving new places. I still avoid a lot of things because I am fearful. I'll never be that mom who decides on a whim to take a trip to the zoo.

I think anyone with a chronic illness mourns the fact that they're stuck with this issue for the long haul. And as a mother, I instantly began worrying that I was going to transfer my fears and anxiety to my children, either through my behaviors or through genetics. Even when I am "well" and in therapy, I still find a lot of things difficult. I don't do well on public transportation or driving new places. I still avoid a lot of things because I am fearful. I'll never be that mom who decides on a whim to take a trip to the zoo. Not without bringing another adult with me and thoroughly researching logistics such as routes and parking.

Over the years, I've definitely come to peace with my diagnosis. I've had two more pregnancies that I've chosen to medicate through. And I know myself a lot better. I know when I need more help. I also know that having children has given me a kind of strength I didn't have before. Even the act of conquering unmedicated childbirth was hugely transformative for me. I learned I could cope with an onslaught of physical sensations and that my body is capable of taking care of itself as well as another human. I've come to terms with the fact that my kids might be more predisposed to anxiety issues themselves, but I also believe that I am the right mom for anyone with anxiety issues because I understand them so well. I know saying "don't worry" does no good. I know that feelings pass and that reminding my kids that they are safe is one of the most important things to reassure them.

But more than just understanding my strength as a parent and the unique set of coping skills I have, having children has been a wonderful exercise in mindfulness for me. Part of my anxious life is constantly worrying about the "what-ifs." And one of my coping strategies is focusing on the here and now rather on catastrophizing any given scenario. When I'm with my kids, and they're talking my ear off about Minecraft or singing along to the radio, there isn't room in my consciousness for worry. I'm in the moment. I'm looking out the window with them and noticing the colors.

I recounted this experience to my psychiatrist later, and she stopped me. She reassured me that as someone with anxiety, I would never put myself or my kids in danger. My cautiousness has its perks.

And when one of my kids is in a crisis, like they aren't feeling well, or they're upset, I always handle it. That has given me huge confidence. Even with my fear of stomach issues, when my son got car sick recently, I didn't worry for a second that I was going to catch something contagious, or that my own fear of vomiting would keep me from helping him. I just pulled over, cleaned him up, hugged him, and took him home. I realized that a lot of my worrying about that very situation had in some ways prepared me. I've already thought about how I would handle a lot of tough situations. As annoying and intrusive as worries can be, sometimes they've helped me cope in a moment of stress.

Anxiety is my burden, but it's also my strength. Knowing how to cope with panic attacks has taught me a lot about myself and about fear. And there are perks to being anxiously inclined. Once I was at a mommy-and-me music class with my son when I started to get the telltale signs of an impending panic attack. I got hot and lightheaded and started to feel sick. Not missing a beat, I took some deep breaths and took a tiny dose of an anti-anxiety medicine I keep with me in my purse. After the class, I felt better, but then I was worried that the tiny dose of meds would sedate me enough that I wasn't safe to drive. I recounted this experience to my psychiatrist later, and she stopped me. She reassured me that as someone with anxiety, I would never put myself or my kids in danger. My cautiousness has its perks.

Of course I wish I could be more carefree. I wish I could be more spur-of-the-moment. I wish traveling was easier for me. I wish I was that mom who dropped everything to go to the zoo, but I'm not. I think about things. About everything. I've had to learn a lot about coping. Because of that, I'm a mom who will know how to help my kids through periods of fear and discomfort. I'm a compassionate mom who knows that pain isn't always obvious or physical. I do the best that I can. And I don't take my triumphs for granted. I may get to the zoo yet. And when I do, I'll celebrate.