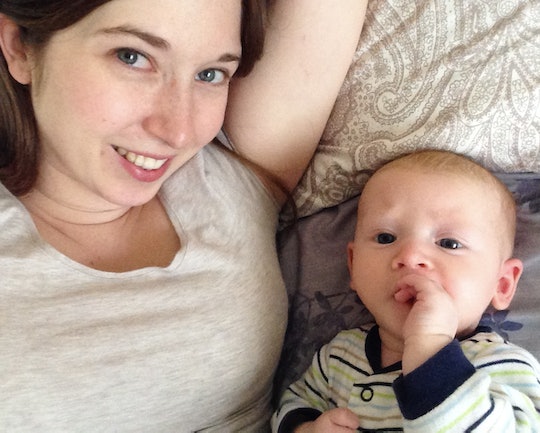 Honestly, I Have No Clue How To Wean My 1-Year-Old Son

As my son’s first birthday approaches, I feel a sense of accomplishment knowing that I reached the one-year milestone of breastfeeding. I did my best to breastfed on demand, no matter where we were. I made sure my body could provide for him as best it could, and for some reason, I wanted this notch in my mama belt so badly. And I finally have it. However, now that I have reached the mountaintop, I realized I have no idea where to go from here. I don’t know how to wean my baby, and he doesn’t seem intent on self-weaning anytime soon. To be honest, I never thought this would be a problem for me. I thought by now he'd be breastfeeding rarely, and only for comfort. However, we’ve just barely introduced bottles successfully this month, and even so, he’s not taking them often. He still wants to breastfeed on demand, and so I let him. I’m not sure where to even start with weaning, because despite having two older children, I’ve never had to do it before.

Years earlier, my oldest son made it to the one-year mark, but by then he was barely breastfeeding at all. My daughter self-weaned at six months. My experiences with breastfeeding each of my children have been radically different, so there is no “normal” for me to go on. The other two did all the weaning work for me, and now that I am faced with a 1 year old who still breastfeeds like there’s no tomorrow, I’m in totally uncharted waters. And I have no clue how where to go from here.

After our rocky start with breastfeeding. I could tell right away in the hospital that we were going to have trouble. He would latch like a boss whenever the lactation consultant would come to my bedside, but as soon as she would leave, he would refuse to latch or only feed for a few minutes. The nurses kept seeing him at his best, and told me there was nothing to worry about, even though I knew he wasn’t quite getting it.

I want the opportunity to leave him every now and again. I want to wear bras that don’t have extra-wide shoulder straps and plastic nursing clips. I’m ready to move forward. My baby, however, is not.

By the time we took him home, he was breastfeeding so little that I quickly became engorged, and had to send my husband out to the store to buy the next cup size up for my pump, just to get some relief from the pressure. My son then quickly dropped too far below his birth weight, and was clearly dehydrated by the time we took him in for his three day check-up. His pediatrician insisted that we use a bottle to get some fluids in him, and though I was reluctant, I knew it was what he needed.

He took to the bottle in the way I longed to have him take to breastfeeding, and quickly refused any attempt I made to breastfeed him. I went to a lactation consultant, completely dejected by the time he was five days old. I knew our window for him to “get it” was quickly closing. We spent an embarrassing hour of the lactation consultant's time spraying milk on my chest and clothes while shoving my baby onto my breast again and again. I cried whenever I tried to feed him at home, afraid that our lack of breastfeeding bonding would plunge me into depression.

Then when he turned one week old, something magically clicked. He realized my milk had come in and took to breastfeeding like a fish to water. My lactation consultant paraded us around the office as he suckled, showing off his great success after our week of hell. I was a breastfeeding warrior, and once we had the hang of it, I was determined not going to let our success slip away. We eschewed all bottles from that point on, and I breastfed on demand. I gave up any hope of an evening out or a night away because he needed to breastfeed all the time. But I figured that would change as time went on. Eventually, he would take a bottle. Eventually, he wouldn’t need me at night. And eventually that will be true, but it isn’t yet.

I wanted the fictional "one-year badge of honor for breastfeeding," but now that it’s here, I’m not sure I want more. I’m not sure I can handle more.

Until I figure out how to wean him, I am homebound in a bad way. My husband and I have spent a whole year without a night alone together, even in our own bed. Our nearly 1 year old still wakes up at night, sometimes multiple times, demanding to breastfeed in order to go back to bed. He raises hell for anyone who tries to babysit for more than an hour or two, longing for the comfort of me, and more importantly, my breasts.

I wanted the fictional "one-year badge of honor for breastfeeding," but now that it’s here, I’m not sure I want more. I’m not sure I can handle more. I wish I knew how to wean my baby, even though that means breaking a bond that was so monumentally important for me after our difficult start with breastfeeding. I want the opportunity to leave him every now and again. I want to wear bras that don’t have extra-wide shoulder straps and plastic nursing clips. I’m ready to move forward.

My baby, however, is not, and I don’t know how to change that. So for now I will let him be my baby for a little while longer. I'll let him breastfeed when he wants and as often as he wants and trust that “eventually” will someday come. In spite of the limitations that have come with our breastfeeding journey, it is still a precious time that I will long for someday, so I'm going to savor the moments as they linger on, hoping that eventually comes sooner than later.

More Like This
How A Recall Of Contaminated Formula Made The Formula Shortage Crisis So Much Worse
Can You Help Your Baby’s Hair Grow?
17 Best Potty Training Products For Toddlers
Here’s What You Need To Know About That Viral 1960s Baby Formula “Recipe”