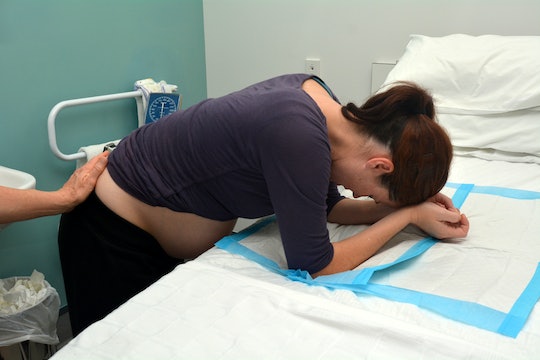 If Your Due Date Is On Or Near The Winter Solstice, Preparation Is *Key*

This year the Winter Solstice promises to be a little trickier than most — some even call it the worst day of the year — but that doesn't mean if you are due that day that you should full-on panic. Astrologer and author Neil Spencer told the Daily Mail that on December 21, the sun and Saturn will be lined up for the first time since 1664, which in the world of astrology, could cause a precipitous shift. The antidote? Preparation. Here are some things you should know if your due date is on or near the Winter Solstice.

In 2017, the Winter Solstice is on December 21, at exactly 11:28 EST. The whole northern hemisphere will experience the solstice (the precise moment that the North Pole is the furthest away from the sun) at the same time, marking either the shortest day of the year or the longest night of the year, depending on your perspective. The good news is that while it seems horribly depressing that you barely got enough daylight to enjoy, each subsequent day will bring you a little more sunlight.

With this particular Winter Solstice being predicted to be full of awful things, it's tempting to hide, lay low, and let it pass. Unfortunately, while the rest of the world could conceivably try to limit their plans in the next few days to avoid any difficulties, a pregnant-and-bursting mama knows that if the baby is coming, it's coming, and there's no room for negotiation and rescheduling. Don't freak out though. It doesn't mean you are going to have a terrible birthing experience. It does imply, however, that you may be in your best interest to expect the unexpected and arm yourself with some Plan Bs.

Between Lamaze classes and reading What To Expect When Your Expecting, you may have your birth plan all set out. Be prepared to rip it up, or at least to revise it with a red pen, if you hit some bumps in the road. This is the kind of day where you forget your long-packed suitcase in the front hall, your OB-GYN is out of the country, or your Uber doesn't show up. So make sure you put a reminder by the front door handle to bring the hospital bag, make sure you know what the alternate plan is if your doctor is not going to be there, and have multiple car service options in your phone if you're taking a car service. Your Plan B list should be followed with a Plan C, Plan D, etc.

According to astrologer, Elisabeth Grace, in an interview with Romper, on the day before the solstice, things might flow fairly easily. Don't get too comfortable though, because on the day of the solstice itself, things may get a little more challenging. The most important thing you can do, says Grace, is to make sure you are communicating clearly with everyone around you.

"Repeat yourself several times, if needed," she says. "Whether you are in pain and need drugs or something doesn't feel right make sure that you are understood." She recommends asking the nurses and doctors to repeat what you have requested so that everyone is clear they are on the same page. Communicating with your partner could also be a little off, so hopefully if you and your partner in crime go into this knowing that, you might be a little more patient with each other.

With all the potentially awful bumps you might hit, the encouraging thing is that in 2012 many thought the winter solstice would mark the end of the world, because, according to Mental Floss, the Mayan calendar ended then. We're still here, so that bullet was dodged. Given that, this year's solstice might not be so bad as we think.

And in all honesty, labor is, in every sense of the word, dramatic. Everyone goes through their own crazy, life-changing experiences, and if you find yourself facing some unexpected inconveniences and hiccups during your laboring process, trust that you are not the only one, Solstice or not. Just remember: You got this.