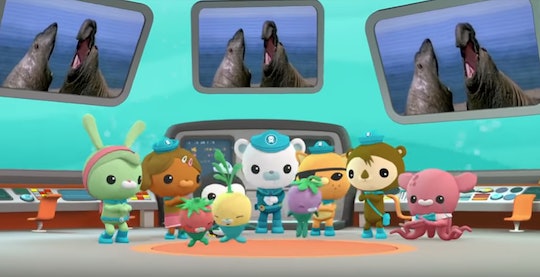 As a mother of three kids ranging from 4 to 17 years in age, I've spent a considerable portion of my life humming snippets of theme songs from children's TV shows (often without realizing it). When my oldest was a toddler, it was the Elmo's World song; with my middle child, Wonder Pets. Currently, it's a song from The Octonauts that I just can't shake — probably because my youngest kid won't stop singing "Creature Report, Creature Report" all day and night. But why? Why do kids get stuck on certain songs to the point where nobody in the house can remember if other tunes exist?

More Like This
30 Cheap & Easy Summer Activities For Kids
This Is Why Your Toddler Wants To Feed You All The Time
The Best Splash Pads For This Summer
Is Your Kid Ready To Ditch The Nighttime Diaper? Look For These Signs

One thing is for sure, which is that you're not alone in your earworm-induced agony. There's no shortage of parents venting similar frustrations online.

"If you haven’t yelled from your kitchen 'Creature Report, Creature Report,' are you really a parent?" asked an article on New Zealand's The Spinoff.

"No one tells you that one of the things about parenthood is that you spend several years (I assume) with a constant internal theme tune going on. 'Creature Report' is one of mine, and it drives me absolutely batty! All morning at work... Aargh!" said one commenter on Mumsnet.

"If I see the 'Creature Report' before the school run then that catchy little tune stays in my head all day," said another.

After a certain amount of time, you can't help sort of liking whatever song your child can't stop singing/listening to/watching, etc. Mostly because you just don't have the energy to fight it anymore.

As it turns out, however, there's actually good reason to like these little tunes, and it has to do with why your kid likes to sing them all the time.

"For kids, so much of the world is new," developmental psychologist Kim Metcalfe tells Romper.

"Kids seek familiarity, which helps them feel safe in a world that is often overwhelming." she continues. When little ones feel out of balance, they're driven to "explore, discover, and learn the information that restores their mental balance."

"Songs have predictable patterns making learning easy and fun — kids feel good about learning and 'knowing,'" she adds. "When they feel good they do it again and again to get the 'good feeling' and also to maintain mental balance."

Repetition shows kids that the world can be predictable, and that helps them to feel more secure. So if your son always seems to be singing "Creature Report" under his breath while he's coloring or turning Play-Doh into spaghetti, he's not just suffering from "broken record syndrome," as my grandmother called it. He's reassuring himself on a subconscious level. Think of "Creature Report" as his mantra, and you'll get the idea.

Musical repetition serves yet another purpose, which adults benefit from as well as kids.

"Musical repetition gets us mentally imagining or singing through the bit we expect to come next," professor Elizabeth Margulis, author of the recent On Repeat: How Music Plays the Mind, told Mic. In other words, when you listen to a song repeatedly, you're so familiar with what's going to happen next that you feel like you're singing it yourself. It's what Margulis calls "virtual participation," and it's a sort of anticipation that makes it feel like you're "creating the music with your mind."

So while your kid might be imagining that he's creating the "creature report" music with his mind, you're probably thinking of the tune more as something that's invading your mind. Indeed, scientists sometimes call earworms "involuntary musical imagery," or INMI, according to Live Science. But if it's involuntary, why do certain songs make the cut?

"The overall conclusion is that the song has to be quite simple in order to be recalled spontaneously, but also have something a bit unique that makes the brain want to rehearse it over and over," Kelly Jakubowski, a postdoctoral researcher in the Department of Music at Durham University in the U.K., told Live Science.

Clearly, "Creature Report" fits the bill. And just in case you need a little convincing?

You have to admit, it's a real toe-tapper. And informative to boot!