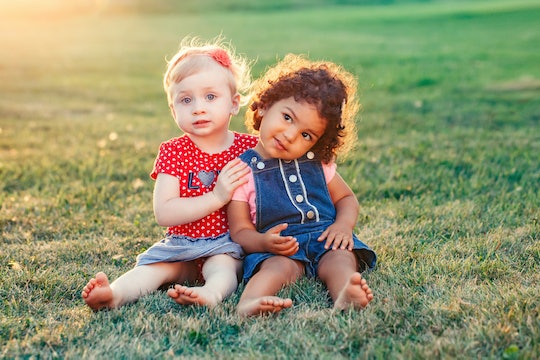 If Your Kid's Middle Name Is Marie, This One Is For You

Just like first names, middle names wax and wane in popularity. Some people choose their kid's middle name to honor a loved one or even a favorite author or musician; others make their pick with the resulting initials in mind; still others are drawn to a middle name based on how many syllables it has and how well it flows with the first and last. But there's one middle name for girls that never seems to fall entirely out of favor: Marie. So if your kid's middle name is Marie, this one is for you.

Here's the thing: You've definitely known quite a few women with the middle name of Marie in your life, whether or not you realized it (of course, your own middle name might be Marie, too). In fact, it's not at all uncommon for a grandmother, mother, and daughter to all have the middle name of Marie, even if their first names are different. Indeed, "Marie very much feels like one of the most popular middle names ever," as The Art of Naming put it.

"Marie is the French form of Maria and Mary, both of which come from the biblical Greek names Mariam or Miryam," explained the site. The meaning of the name is typically given as "sea of bitterness" or just plain "bitter," so clearly it's not the name's definition that makes it so appealing. Perhaps, the website suggested, the name became widely used with Christians because of the Virgin Mary; there have also been Queens named Marie and Mary.

Then there's the two-syllable rhythm of the name to consider.

"Most popular ‘80s and ‘90s girls’ names had two or three syllables, with the accent on the first syllable," according to MamaMia. "Jessica, Sarah, Amy, Emma, Katherine, Rachel, Hannah, Georgia, Caitlin. To make a pretty-sounding combination, most parents would – subconsciously – choose a middle name with one syllable (Anne, Jane, Lee, Kate), or else two syllables, with the accent on the second syllable (Louise, Marie, Renee, Nicole)."

I was given the middle name Marie in the mid '70s, mostly as a result of my mother's Catholic upbringing, I think. But also simply because it was just the middle name you gave your daughter back then, for some reason... or so the number of girls and women I've met through the years who shared both my middle name and birth year would seem to indicate. When it came to my own daughter, born 17 years ago, I unwittingly went with what turned out to be another incredibly popular choice for her middle name: Emma. (Who knew?)

If you have a child with "Marie" printed in between the first and last names on her birth certificate, you know the following things are true.

More Like This
Here’s Your Guide To Paced Bottle Feeding
Baby-Led Weaning: A Comprehensive Guide To Introducing Solids
There’s A Reason Your Baby Always Falls Asleep While Breastfeeding
Experts Explain Whether It’s Safe For Your Baby To Sleep On Your Chest