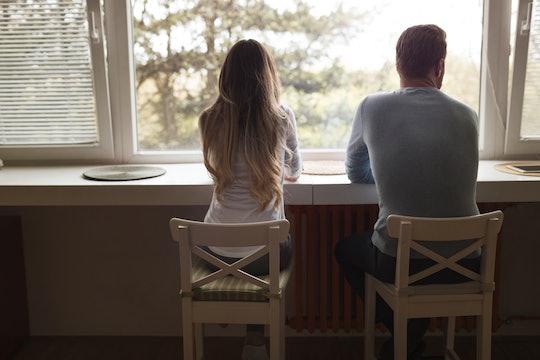 If Your Partner Has Done These 7 Things, They Might Have Committed Emotional Infidelity

When I was younger, I thought of cheating as a very black and white act. It seemed to me that there was a clear line between faithful and unfaithful partners, and that line was crossed when inappropriate physical contact was made. But as I've gotten older, I've realized cheating isn't just a kiss that shouldn't have happened; it's anything that betrays your partner's trust and boundaries. Committing emotional infidelity is just as painful as physically cheating on someone, and more people are guilty of doing it than you'd think.

Seth Meyers Psy.D. defined emotional infidelity as "the behavior that one partner engages in which fosters emotional intimacy in the here-and-now with someone else, and sometimes promotes the possibility of sexual intimacy in the future" in Psychology Today. That definition is pretty vague, and ambiguity is a big part of emotional cheating; whether or not an act crosses a line depends on the boundaries you and your partner set up in your relationship. Many people don't know they're emotionally cheating when they do it, as some of the actions might seem innocent, but it's still a very common issue: 35 percent of wives and 45 percent of husbands will have an emotional affair at some point in their lives, according to the American Association of Marriage and Family Therapy, as reported by Health Research Funding.

If you're starting to wonder if your coffee dates with a pal aren't as innocent as you once thought, read on for seven signs that you might have emotionally cheated.