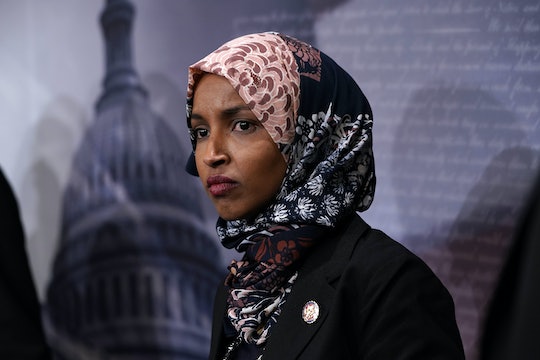 It is unfailingly difficult to maintain momentum in protest, even if you are passionate about something. Even if you are protesting something that matters so much you can't imagine it ever not mattering to you. Ideals get dampened by the ordinary structure of our lives but also by politics. By controversy. By people who want to dampen your spirit and your cause with detail and dissidence. But here's the thing; we are angry for a reason. We march for a reason. And Ilhan Omar's tweet about the Women's March is a reminder of exactly why we march.

The Somali-American Democratic congresswoman from Minnesota is preparing to return to St. Paul's, Minnesota on Saturday to speak at the Western Sculpture Park for the Women's March rally being held there. Clearly she is a woman who is well aware of the controversy surrounding the Women's March organizers in their third year. The talk of anti-semetic undertones and alliances with Louis Farrakhan, the Nation of Islam leader who has been openly anti-semetic in the past has caused several political leaders to distance themselves from the march for fear of being tarnished with the same brush. In the days leading up to the Women's March in its' third year, it has been easy to feel as though the bloom is well and truly off the rose. As though the momentum begun with the first Women's March the day after President Trump's inauguration that saw more than 3.3 million women and men march together in solidarity has finally lost steam.

But Ilhan Omar's simple tweet alongside her daughter proves we need to keep on marching.

In the tweet Omar shared on Friday, her daughter Ilwad had a message for women on social media. As she put it quite simply:

We are family. We are going to the Women's March. Because we are women.

That's it. That's sort of all a person needs to remember about this march. Is that little girls like Ilwad are looking for guidance and solidarity. At her young age she already understands the one clear, perfect reason why women are rallying for the third year in a row to march for the rights of all women.

And of course, her message was heard loud and clear by people who were, perhaps, grateful for the reminder.

Ilhan Omar knows more than a little something about fighting for her right to protest. She fled Somalia as a refugee with her family in 1991, spent four years in a refugee camp in Kenya before finally arriving with her family in the United States. In January, she was sworn in as the first Muslim woman elected to Congress.

Her story bears repeating and repeating often. Especially to her daughter and all the young girls who need to know that there is strength in perseverance, especially when women persevere as a group.

The politics and controversy and loss of momentum at the Women's March are not the story here.

This girl is the story here.