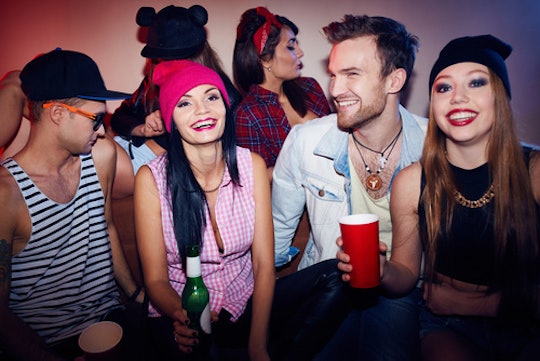 I'll Admit It: I Resent My Child-Free Friends

On nights out, I sometimes catch myself watching my child-free friends. I clock the ease and insouciance of their movements. When they chug a sixth gin and cranberry juice, dance freely without realizing it's 3:00 a.m., catch the midnight showing of a new movie, roll yet another cigarette, or make plans with someone they just met at the bar, they are beautifully impulsive. They have no one to think about but themselves.

My friends remind me of a version of myself that existed only a year ago. Although I worked full time, my out-of-office life was not too different from theirs. I was still the epicenter of my own existence, and proudly so. My baby's happiness and wellness rest largely in my hands, and that's a big f*cking responsibility that I don't take lightly. It also means that I can't behave the way most 20-somethings in my social circle behave. It means that sometimes, I can't help but resent my child-free friends.

Now that I have a baby, everything I do — every plan I make, every drink I drink, every errand I run — involves preparation and forethought. I can no longer get too drunk or take recreational drugs, because I'm breastfeeding and I'm afraid of ingesting anything that will contaminate my milk. I can't take a spontaneous weekend trip away with my pals, either. I wouldn't want to leave the baby with a sitter for that long, even if someone was miraculously willing to watch her for more than 24 hours. I can't stay up until sunrise every weekend. Even if I wanted to, my body is too sleep-deprived as is to allow for such a luxury. I haven't even seen Wonder Woman yet. My partner and I keep meaning to go, but by the time he gets off work, we're both too damn exhausted.

When I say that I resent my non-parent friends, it's not to say that I'm angry with them. I feel no hatred towards them. I don't even feel that much jealousy. I know I love them just as much as I ever have.

It's more like I resent their lack of appreciation for this time in their lives, and I resent my child-free self along with them. She didn't know how easy she had it. She didn't realize that being able to get up and go, at any time of the day or night, was a kind of privilege. She didn't know, like the majority of my friend's can't possibly yet know, that leaving the house when you have a baby is a legitimate process. Before going to my in-laws for lunch, for instance, I have to ask myself: are there enough diapers in the changing bag? Have I packed the baby wipes? Do I have enough milk pumped or compotes prepared to get wherever it is I'm going? Is there a change of clothes in case she has a blowout?

In truth, I still enjoy visiting with my pals when the opportunity presents itself. These getaways are rare, but it makes me appreciate them more. Regardless of what we're doing, however, someone always tells me to savor the moment. "This is your you-time, so do whatever you want," they may suggest. Or, "Tonight you're not a mom, so live a little."

Even if my pre-baby life was chaotic and weird, it was sort of freeing, too. It's a kind of freedom I miss sometimes, even if I wouldn't trade my daughter for anything in this world.

This is where things get a bit complicated. My friends mean well, but they don't understand that I'm always a mom now. Even during my me-time, I'm constantly thinking of this little person at home, and that limits what I can do. I'll never want to drink quite as much as my friends do at parties, because I know I won't get to sleep it off the next day. I'll never want to risk being so hungover that watching the baby the following morning feels impossible. I'll never want to leave my kid for multiple days at a time because someone found a cool holiday deal via a budget airline.

Although I fully believe that mothers should be allowed their space, independence, privacy, and alone time, there will always be limitations. These limitations will always be at the back of my mind, both when I'm with my daughter and when I'm not. I could never have comprehended this mindset before having a kid, so I know I cannot blame my friends for being unable to comprehend it, either.

That said, I do wish they were able to value this part of their lives a little bit more. I wish they could understand that being your own highest priority is a luxury, as is the ability to be spontaneous. I wish my child-free friends could appreciate these things, largely because I didn't.

When I say that I resent my non-parent friends, that's not to say that I'm angry with them. I love them just as much as I ever have. I just resent their lack of appreciation for this time in their lives.

When you're in your 20s, your life is usually a mess, and when I think about my life pre-baby, I almost always think about the sh*tty things that happened. I think about the nights out that were never as good as I thought they would be. I remember all those damn trips to the 24/7 grocery store in the middle of the night because we'd run out of cheap beer. I remember the questionable dates and the not-so-nice people I met on any given evening after 2:00 a.m.

More Like This
When Does A Baby Recognize Their Father? A Pediatrician Explains
Winter Travel Tips For Families
Tips to Beat Jet Lag, For You & Your Kids
How To Celebrate Baby’s First Valentine’s Day, From Gifts To ’Fits
What Parents Are Talking About — Delivered Straight To Your Inbox