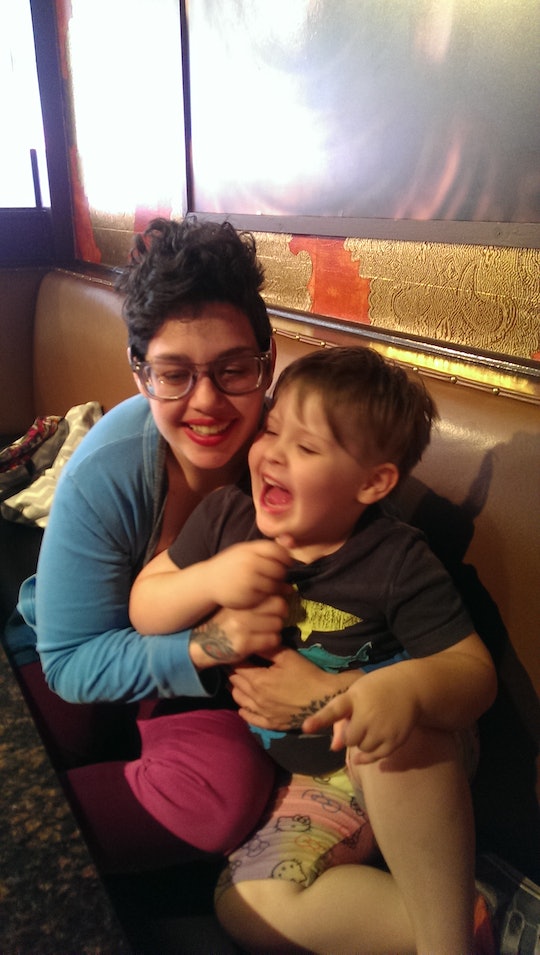 I'll Never Give My Kid A Hug Without His Consent

I'm teaching my son that he owns his body and I own mine, one hug at a time. I ask him permission before I scoop him up into bear hugs. I ask him permission before I smother him with kisses. Sometimes, he tells me yes. Sometimes, he tells me no. When he says yes, I gleefully shower him with physical affection. When he says no, I say OK, and tell him I love him, and we go back to whatever we were doing.

Arthur is 6 years old. He is just old enough that he is starting to pull away a teeny tiny bit. He wants to run and play. He doesn't crave cuddle time like he used to. But he is still young enough that all I want to do when I see him is pull him to me and smell his hair. He is still young enough that, on reflex, I reach out to hold him without thinking first. And then I have to stop myself, correct myself, and make myself ask permission. It's not an easy thing, and I slip up. It's a work in progress. But it's important.

I started this when I noticed that sometimes my kiddo would pull away from me when I hugged him. I hug him a lot, and I used to hug him even more. I remember one day asking him what was up, why he was wiggling, and he said, "I want to play, not do this love stuff." It snapped into focus for me: I had just been taking it for granted that I was allowed to hug him and kiss him whenever I wanted. I hadn't actually thought about if he wanted it.

My partners and I are generally on the same page about this. I think I tend to be the most conscientious about asking permission before entering Arthur's space, but my partners get the need for it. And the practice has enabled him to set firmer, stronger boundaries with them.

I need Arthur to know that his body is his own. I need him to grow up with the expectation that other people will respect his body and his boundaries. I need this for so many reasons. One is that I didn't grow up around people that respected my ownership of my body and my boundaries. I was abused, physically by some people, and sexually by one other person. I was cajoled and forced in a gender I didn't identify with. That kind of stuff lingers. It took me a long time to recognize which boundaries had been crossed, and how. It took me a long time to understand how to reassert boundaries in a healthy way, and how to keep from crossing other people's boundaries.

I ask for a hug before I take it. It's not actually mine to take. It's his to give.

I am also raising a boy in a society rife with rape culture. As a non-binary assigned-female-at-birth person, it is my duty to make sure to minimize the extent to which my son is socialized to replicate these dangerous ideas and actions. One way of doing that is to embody and enact the ideas of consent and bodily autonomy at home, both with myself and with him. I try to empower him to have autonomy to whatever reasonable extent that I can. He gets to pick his clothes. He can tell me when to cuts his hair. He can tell me when it feels right to be physically affectionate or not.

And, equally important, I get to set boundaries with him, too. When we rough-house, I have told him that he has to ask me before he can play-hit me. And he has to ask me before he can tickle me. Both are actions that are potentially triggering for me and can lead to a potential panic attack. Those are actions that have deep roots to trauma in my past. Even when it's my kid doing it, and he clearly has no harmful intentions, my reptile brain freaks out. I'm put right back in that terrifying, helpless headspace as an abused kid. The hardest part is that my reptile brain gets freaked out utterly unpredictably — not always, just sometimes, usually inconveniently.

I've explained it to him in simple terms: those are things that are scary for me, so he needs to ask, because sometimes it's OK, and sometimes it isn't. Like me, he tries. Sometimes he gets carried away, and forgets, but mostly he remembers, and he asks. Sometimes, I say yes. Sometimes I say no. Either way, he is OK with it.

The important thing in this process is the asking, that there is a process of open communication between my son and I about our bodies and our permeable, shifting boundaries with our bodies. There is an acknowledgement that this is a thing that can be discussed — that should be discussed — that I hope becomes a formative part of how he understands close relationships.

That is why, even as I reach for him, I hold myself back and ask for a hug before I take it. It's not actually mine to take. It's his to give. I hope that by interacting this way he'll feel empowered to expect others to interact this way with him, so he is not victimized the same ways that I was as a child.

And I hope that when he is grown that he remembers this, that he carries it with him, and that this idea of consent becomes woven into his bones. I hope that in the future as he interacts with his partners he knows that their affections are not his to take, but theirs to give.