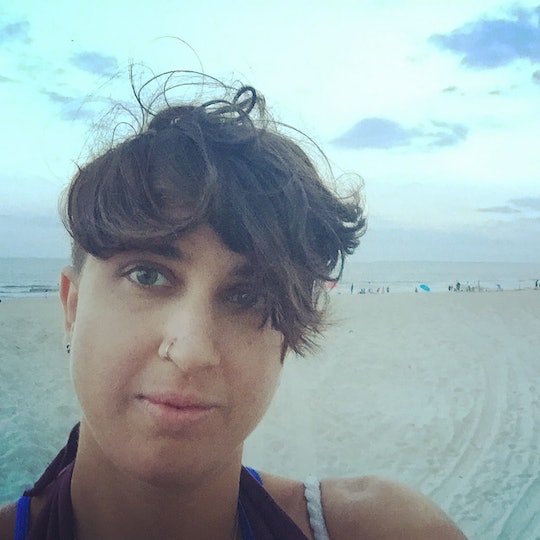 When I placed my son in an open adoption four years ago with the gay couple of my dreams, I was certain that he wasn't going to be my last kid. I was dead-set on raising a child of my own after the placement — at least one, but maybe more. Telling myself that I’d have more kids later was part of what made me feel OK about my decision to relinquish my son for adoption. I was determined to change the financial and logistical factors that had led me to that point — namely, being broke and single — so I’d never have to make that same decision again.

Slowly but surely, my financial circumstances improved. While I’m still living paycheck to paycheck, I pulled myself out of default on my student loans, inched up my credit score, and have a (small, but existent) savings account. I live with a loving, dedicated partner. Up until Election Day, another kid was something that seemed like it could happen in the next five years, and I was reasonably sure I wanted one.

Then Donald Trump happened. Now, I’m not so sure.

I’m already terrified about what’s going to happen to my son, who has two same-sex adoptive parents. Even though Trump recently said on 60 Minutes that he is “fine” with gay marriage, considering that hate crimes have been on the rise following the election, I’m worried that my son or his fathers will be caught up in these attacks. I’m worried that his Cuban-Chinese daddy (who could be mistaken for South Asian) is going to be the victim of racist and Islamophobic policies, rhetoric, and violence. I’m worried about the planet becoming uninhabitable in my son’s lifetime, especially now that Myron Ebell, a prominent, climate change denier, has been appointed to head the Environmental Protection Agency.

So, adding another kid to that terrifying future? Fuhgeddaboudit. My desire to have a child seems significantly less important now than ensuring he or she won't grow up in a war zone. I feel too protective of my theoretical children to allow them to exist during a Trump presidency, to let them breathe this fearful, hateful air — and I feel that my energy would be best spent on fighting this administration as hard as I can.

I feel too protective of my theoretical children to allow them to exist during a Trump presidency, to let them breathe this fearful, hateful air.

Even if I don't end up having my own kids, I know I'll be OK. I see my son often and I’m incredibly close to his fathers, both literally and figuratively: their home is walking distance from mine, and I visit every month or so. I feel involved and engaged in his life; I’ve even picked him up from school. So while I will always feel some degree of loss as a result of relinquishing him for adoption, I feel that I’ve gained so much more than I’ve lost.

Still, I’ve never stopped fantasizing about having my own little peanut, a little lovebug who I can eventually teach about feminism and politics and sex, who will (in this fantasy of mine) listen to everything I say and is able to transition into the real world without pain. I know that this fantasy is idealistic and not realistic; still, all my life, I’ve wondered what kind of mom I would be, and I was so looking forward to finding out.

Not now. Now, the thought of bringing another child into the world fills me with fear, not joy or excitement. I don't want to raise a child in a country that is torn apart, where there are mountains of rubble where our social safety nets used to be. Even if a Democrat beats Donald Trump in four years, I’ll be 34 at that point; the decision will be a little more time-sensitive than it is right now. Maybe I’ll decide to just let that particular ship pass me by.

Like many others, the election of Donald Trump has made me realize how much I took for granted under Obama’s presidency. I thought that our country was just going to keep getting safer. I thought we were on a permanent, if uneven, upswing. I thought, “Wow, if we’re making all this progress now, imagine what this country will look like in 30 years!”

I no longer think that. I’m not even sure we’ll be around in 30 years. And if I can’t be sure of that, I love my unborn kids too much to subject them to such an uncertain, unsafe world.