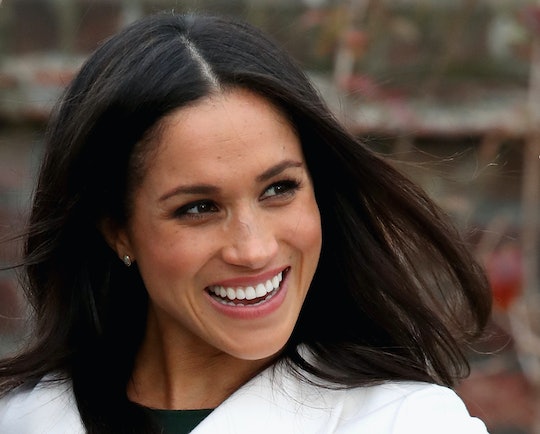 While I enjoy an engagement as much as the next person, and find weddings to be a blast (as long as there's an open bar), I must admit that when it comes to Royal Weddings, Royal Engagements, Royal Baby Announcements, or really anything to do with the Royal Family, I'm impartial. I wish them all the best, I think they live in cool house, I want to visit the dudes in red coats, and other than that, eh. But when Meghan Markle said "yes" to Prince Harry, my interest in the Royal Family changed. I am no longer ambivalent, I am excited. I am hopeful. I feel seen, although this engagement has absolutely nothing to do to me. Because, as a mixed-race mother, I know Meghan Markle can and will provide the world with an example of what it means to be a mixed-race woman in a stubbornly black-and-white world. She already has. I know my son, and any subsequent children I may have, can look at the princess across the pond and see a part of their mother, a part of themselves, and a growing part of the world.

According to the Pew Research Center, the number of mixed-race Americans is increasing three times faster than the population of the United States. In the '70s, one percent of all American children were of mixed race. Now, 10 percent are. The U.S. Census Bureau predicts that, by 2060, the number of multiracial Americans will be three times larger than it is now. At the same time, 55 percent of mixed-race Americans say they have been subjected to racial slurs or jokes, and an estimated 24 percent have felt annoyed because people have made assumptions about their racial background.

I am one of those Americans.

I grew up in a small town outside of Anchorage, Alaska. My father was born in San Juan, Puerto Rico, and moved to the United States with his parents and four brothers when he was in middle school. They made their way as a family to Anchorage out of obligation to my grandfather's military service in the United States Navy. My grandfather served his country for over 20 years. My grandmother taught herself English by watching daytime soap operas while simultaneously caring for her five children.

My mother is a blonde hair, blue eyed, girl-next-door from Rutland, South Dakota. She grew up on a farm, with liberal Democrats for parents, feeding cows and bailing hay and riding horses. A hellion in her youth, she moved to Anchorage to become an in-home nanny for her newborn cousin and escape the small town she now, at 56 years of age, desperately misses. She met my father when he was a police officer, and a few years later, I joined the world as a half-Puerto Rican, half-white baby with a full head of brown hair.

Growing up, I felt as though I was forced to stand on the outside of a socially constructed box, peering in at those who at least appeared to be easily defined, or abandoning one part of who I was in order to embrace another. I could either be the agreeable "dark one" visiting my grandparents in South Dakota; refusing to speak Spanish and ignoring my grandmother's raised eyebrows when I requested authentic Puerto Rican cuisine. Or I could be "Daniellita" when my abuelo and abuela visited from their home in Kentucky; speaking Spanish, attempting to help my abuela in the kitchen, and swaying to José Feliciano as his voice soothed my abuelo over the nearby sound system. But I could never be both.

Everyone assumed I was white at school, even questioning whether my dad was really my dad after meeting him. I wasn't blonde enough to be considered the prettiest at school, but I wasn't dark enough to be subjected to the blatant racism of my white classmates. I was privileged in that I could blend in with the predominately white population, considered nothing more than a "tan white girl," but every time someone misidentified me, white-washed my ethnicity, and dismissed my identity, I felt less and less like I had a place in the world.

In July of 2015, Markle published an op-ed in Elle Magazine, describing how she found her voice as a mixed-race woman. One passage in particular hit me right between the ribs, where my own personal understanding and a larger, collective feeling meet. And this passage, as powerful as it is heartbreaking, is an example of how important it is to women, and little girls, like me to have a mixed-race member of the Royal Family.

There was a mandatory census I had to complete in my English class – you had to check one of the boxes to indicate your ethnicity: white, black, Hispanic or Asian. There I was (my curly hair, my freckled face, my pale skin, my mixed race) looking down at these boxes, not wanting to mess up, but not knowing what to do. You could only choose one, but that would be to choose one parent over the other – and one half of myself over the other. My teacher told me to check the box for Caucasian.

Because that's how you look, Meghan.

When I went home that night, I told my dad what had happened. He said the words that have always stayed with me: 'If that happens again, you draw your own box.'

Our limited imagination when it comes to identity leaves so many people stranded. I've been told I shouldn't identify with my Puerto Rican heritage because I look white. Racists on the internet have told me celebrating my Puerto Rican ethnicity is a bi-product of white guilt, and I've experienced the cold shoulder from Puerto Ricans, and other people of color, who are darker than me.

I have watched as my father was discriminated against by a teller at our local bank, or called a dirty Mexican by an angry football fan at a local sports bar, and every time I felt the cold chill of a revelation: I will probably never experience overt racism as a mixed-race woman, but I will never be fully seen, either.

It's an odd thing, seeing the wires lit up for just a second by a family member and understanding that you have passed by undetected — feeling a pang of jealousy that you haven't been recognized and singled out for discrimination. It's the conflicted feeling of someone who doesn't have a single box to check.

Seeing a black family, with black children, in the White House changed the mindset of a generation, and seeing a biracial princess or duchess will obliterate the question of birthright. The changes occurring within the royal family are proof positive of the direction we are moving in, for all the last-ditch efforts to turn back the clock with Brexit. Diversity and inclusion is the order of the goddamn land. After all, it will be an American mixed-race woman at the altar in May in St. George's Chapel at Windsor Castle, marrying a prince.

It will be the same woman who confidently wrote two years ago, "While my mixed heritage may have created a grey area surrounding my self-identification, keeping me with a foot on both sides of the fence, I have come to embrace that. To say who I am, to share where I'm from, to voice my pride in being a strong, confident mixed-race woman."

Perhaps my son, or any of my other future children, will not wrestle with their place in the world the way I have. My son is now one-quarter Puerto Rican, and looks more like his white father than his mixed-race mother. But I don't want him to choose between the parts that make him who he is, regardless of how he is identified by others. I don't want him to defend his love for lengua or arroz con pollo habichuelas. I don't want him to, one day, sit in front of an ignorant teacher and pick a box used to stifle him, not define him.

And while these challenges, if he faces them, will be uniquely his own, and it is my responsibility to prepare him for the world, having a mixed-race woman as a member of the royal family gives me some reprieve; some feeling of togetherness and understanding and community; an eraser of the "other."

Because if I ever need to give my son of an example of what happens when you draw your own box, I can just point to across the pond.