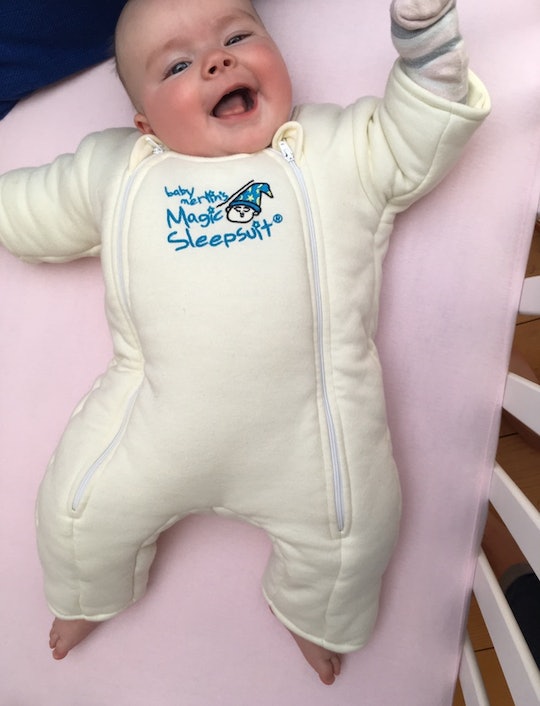 I'm An Attachment Parent Who Sleep-Trained Her Kid

My plans for motherhood leaned towards the crunchy. I was going to give birth with minimal interventions, and then cloth-diaper, exclusively breastfeed, wear my baby as much as possible, and bedshare. I envisioned myself practicing quintessential attachment parenting — certainly not sleep-training.

As anyone who has survived even mere moments of motherhood understands though, making plans is lovely in theory, maybe essential for sanity, and often readily undone by the existence of the erratic, unpredictable human for whom those exact lofty plans were made. In other words, babies are nuts. And there's no way to really plan for them.

I followed through with most of my crunchy plans. We cloth-diaper. I breastfeed and generally feed her solids I make from scratch. Our preferred method of travel is “attached to one another.” My husband and I are super-responsive parents. I remember, in the earliest postpartum days, after one particularly horrendous day of nonstop crying, trying to rest, frazzled in the other room, hearing my husband say to her, "It's OK to be sad. It's OK to be angry."

Yes! I said to my tired self. This is it! We are the parents I want to be, providing comfort but also affirming our child's experience from the very beginning.

And yes, we are, in some ways. But also, my precious baby didn't sleep. At three months, while other moms were smiling guiltily at me, saying their little ones woke up once, sometimes twice a night, my baby Melby was sometimes waking up every 45 minutes, only to be soothed by nursing.

I could never really sleep, just close my eyes and float in that half-sleep waiting for the next grumbling demand for milk, also worried we would crush her in her sleep.

I heard rumors that bed-sharing actually led to better sleep for everyone, because mom could just gently roll over and stick a boob in baby's mouth and then both would drift back off into delicious, shared sleep, noting the advertised risks of a shared sleep surface, per the American Academy of Pediatrics. I believe that that is true for some people. I really do. And I wanted to be close to her, so I really gave it the old college try.

But for me, it felt like one endless nursing session. It never began or ended. I could never really sleep, just close my eyes and float in that half-sleep waiting for the next grumbling demand for milk, also worried we would crush her in her sleep. I felt crazed and frantic. We moved her into her own room early on, thinking maybe just a little bit of distance was the key. It was only nine steps from my bed to her crib — of course, I counted but still neither of us slept. I spent my restless nights lit by the blue glow of my phone, obsessively reading every blog, professional website, and forum posting on newborn sleep. I read books about gentle sleep solutions. I established bedtime routines, eliminated every glimmer of light from her bedroom, bought the screaming sound machine, ordered every swaddle, adjusted pre-bedtime feeding times, and tried to create new sleep associations. I read the cheerleader stories about how babies need you every time they cry, how being responsive cultivates a lifetime of secure attachment. I wanted so badly to not let it make me crazy.

But it did. I was crazy. I was hysterical. I was also, I think, suffering from postpartum depression and totally not dealing with it, but erratic, if not nonexistent sleep made it one million times worse. I was so anxious that at the slightest peep, I was leaping to scoop up my daughter. I gave her no time to work anything out on her own, constantly telling myself, I'd have to get up eventually so I might as well do it now. I was reinforcing her patterns. She was simply doing what I cued her to do.

Around four months, out of sheer desperation and many, many conversations with my husband, we decided to let her cry it out a little. No longer would I leap out of bed the moment she made a peep. We would give her space to cry and I would feed her once after a midnight waking and once early in the morning.

Initially, I felt sure that I was ruining her life, that letting her cry was truly destroying her body's chemistry at the most fundamental level, that I was deeply selfish for being unwilling to continue waking and waking and waking as so many assured me was right. I say that, but also I felt so truly insane and exhausted, I was willing to apparently risk my child's wellbeing for some sleep. I conferred again and again with a friend of mine, who had sleep-trained her daughter at an early age, and she said, "We think of it as exchanging some crying for a short amount of time for a lot of crying over a much longer period." That consoled me... sort of.

We've let her cry it out at each sleep transition. We didn't do it haphazardly; we followed her cues.

That first night she cried many times. Maybe we are just the lucky sleep training parents, maybe we did it at just the right time, but, even though she cried, it was never for too terribly long and, even though it still tugged at my heart, it was never the kind of cry that made me feel sick to my stomach. I actually felt a weird sense of relief that I wasn't leaping up at every peep. I set a timer each time she cried to reassure myself that what felt like hours was actually only just minutes. I put earplugs in to muffle the sounds that still rang so clear in my worried mind. When she woke up in the morning after that first night, I cried a little and told her I loved her. She smiled her big gummy smile at me. She was still my happy girl all day. I seemingly hadn't yet ruined her life or our bond.

The second night she cried much less. The third, even less. Within a week, we were all sleeping better, feeding only twice a night. Part of me realized, I had needed sleep training. I was so anxious about meeting her needs readily that I genuinely believe I was creating a problem. I've read about second and third children, who sleep so much better than the first, maybe, people conjecture, because parents are less hyper responsive, simply because they have to be-- there are other kids to attend to. Melby seemed like a quintessential example of this. We gave her a little space to figure it out, and she did.

Since then, we've let her cry it out at each sleep transition. We didn't do it haphazardly; we followed her cues. Like when the swaddle seemed like it stopped comforting her, but instead she was struggling against it constantly, we knew it was time to move on. I read so many books and articles about when to do what that sometimes I was blinded, but my husband, a true partner and co-parent, helped remind me to take our daughter's cues and not the generic advice from a book that wasn't about our child. The transition was still lumpy. She cried that first night of no swaddle too, grappling with how big the world had just become and how flailing her tiny body within it. But she adjusted quickly. She slept.

Now, at almost nine months, she sleeps for 11 or 12 hours straight per night. Truthfully? I don't feel guilty, though I do feel wary of announcing it publicly. Sleep training, especially using the cry-it-out method, is heavily criticized. People online assure you your child feels abandoned, gives up hope, and succumbs to a solitary, despondent sleep, that they can no longer feel loved or connected to you. And while I recognize that each child, family, and experience is dramatically different, I just don't think that, if you do it with love, that that's true. (and the American Academy of Pediatrics agrees that crying does not result in parent attachment issues or freakish levels of cortisol.) Each night, I snuggle her up, sing to her, dance with her, confidently announce that it's time to rest, and lay her down awake. We both get a solid's night sleep.

Socially, when people shudder talking about parents who let their children cry, I'm generally quiet in response. So here is my big confession. I love and snuggle and carry and respond to my daughter all day long. I feed her when she's hungry, respect her wildly changing emotions, scoop her up when she needs scooping, push her when she needs pushing, and give her my attention and energy all day long. And when bedtime comes, I lay her down and close the door so we can both recharge. She rarely cries anymore, but if she does, that's OK, too.