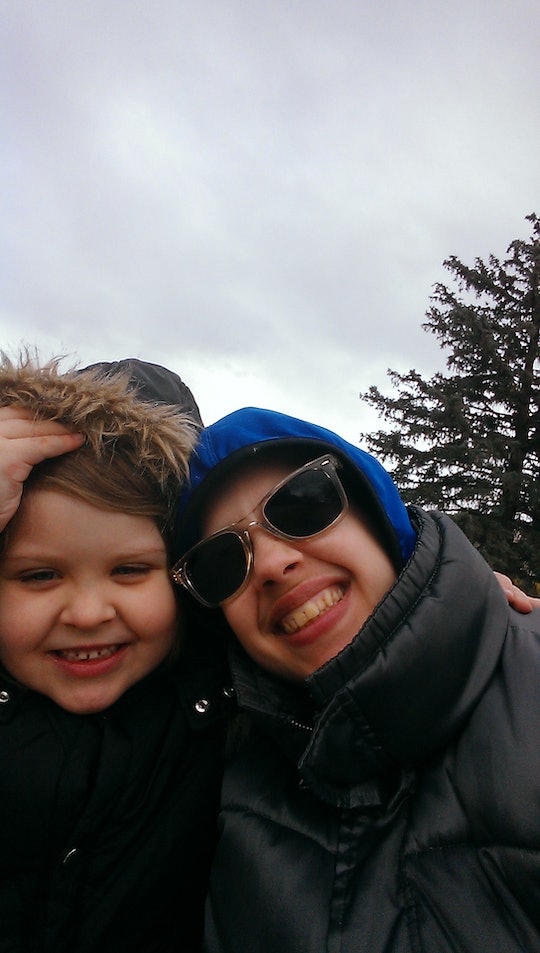 I was assigned female at birth, but I don't identify as a woman. I'm genderqueer, which means I don't identify as either male or female, because both sides of the gender binary are uncomfortable to me. I no longer use my very gendered birth name, and my pronouns are they/them. Generally speaking, I feel pretty agender: the gender binary is just not a relevant construct for me. If it's a choice between black and white, then I am orange.

For this reason, I don't want to be called "mom" or "mama." Instead, Arthur calls me his Baba.

Being labeled a woman has always bothered me, but I've never wanted to be seen and understood as a man, either. I've had difficulty explaining it my entire life. The best language I have for it is whenever someone assigns me a gender, either as a woman or a man, it feels like being made to walk with my shoes put on the wrong feet. I can do it, but everything is just more uncomfortable than it needs to be.

When we are together and someone asks him about his mom, my son corrects them for me. "No," he says, "that's my baba. That's not my mom. My baba is not a girl. My mom is a girl."

I've felt this way my entire life, yet being pregnant brought my discomfort with my gender into sharp relief. I felt like the link between womanhood and pregnancy was so strong that nothing I did could break it. It didn't matter how short I cut my hair, or how butch I dressed. The overwhelming message that I was not just pregnant, but a pregnant woman obliterated everything else about me as a person.

Not every person who becomes pregnant is a woman. (Consider the case of Thomas Beatie, a transgender man who gave birth to his third child in 2011.) Yet we are not taught to understand pregnancy outside any context but womanhood. Trying to separate my gender from my pregnancy was such a strange concept for so many people that I wound up not trying to explain it half the time. It was too exhausting.

"Yes, I am excited to become a parent," I'd tell people, over and over again. "No, I am not going to be a mother. No, not all people who give birth are mothers. Women who give birth are mothers, and since I wasn't a women, I wouldn't be a mother." But people would (and still do) argue with me. And since there's only such much arguing a pregnant person can take, I tried to pick my battles.

For a long time, I searched for a parental nickname for my son to call me. I knew I didn't want him to call me "mom" or "mama." For one thing, that term was reserved for Samantha, his parent who does identify as both a woman and a mother. Additionally, the idea of Arthur calling me "mama" was enough to make me want to jump out of my skin. I knew it would reinforce to everyone who heard it that I was a woman, and I was worried I would never be able to shed that identity.

The truth is, there aren't many great terms for non-binary parents, especially because the term "parent" doesn't exactly roll off toddlers' tongues the way "mama" or "dada" do. So I started having my son call me B, like pretty much everyone else does. From there, the term "baba" developed quite organically. He elaborated on "B" and started calling me "Beebee," then "baba." "Baba" stuck.

My son is and always will be one of my biggest advocates. When we are together and someone asks him about his mom, he corrects them for me. "No," he says, "that's my baba. That's not my mom. My baba's not a girl. My mom is a girl." And he moves the conversation along as if it's the most natural thing in the world — which to him, it is.