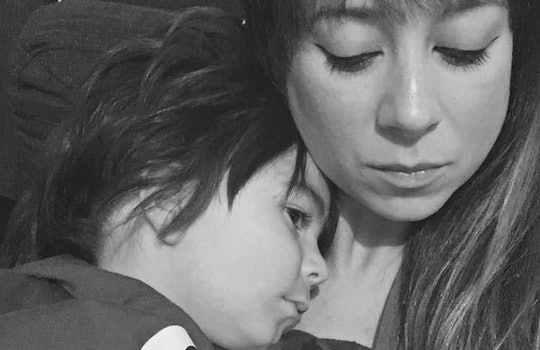 I'm Miscarrying Right Now, & It's Only Strengthening My Beliefs About Abortion

Right now, I am miscarrying.

I woke up with severe abdominal cramps and blood in my underwear. And after two phone calls, a 20-minute train ride, and a five-minute wait, a kind OB-GYN confirmed what I already knew to be true: I was experiencing my third miscarriage. And, of course, it's still happening. The pad stuck to the inside of my underwear is collecting the remnants of a now-detached embryo. The well-known secret of miscarriages is that they're not a clean process. The bleeding goes on, the cramps continue, and pieces of a future you only experienced in your mind are evacuated along with the contents of your now-empty womb slowly. My hopes for a sibling for my son are passing, and I can feel it all.

Women who experience miscarriage are shown mercy and grace, and women who choose abortion are attacked and condemned.

There is a common misconception that the mom who miscarries is a very different person than the woman who aborts, but I'm here to say there is no difference. I am both of those women. I have had five pregnancies, one live birth, three miscarriages, and one abortion. In the eyes of those looking to curtail reproductive rights, I'm therefore one part family values, three parts deserving of pity, and one part going to hell for what I've done.

Women are having as many miscarriages as they're having abortions according to the Center for Disease Control and Prevention's (CDC) National Center for Health Statistics. Of the pregnancies in 2010, 65 percent resulted in live births, 17 percent were miscarried, and 18 percent ended in abortion. And yet, those two results of pregnancy, unplanned or not, are treated very differently by society in general and by the anti-choice advocates legislating away women's right to choose. In this country, women who experience miscarriage are shown mercy and grace, and women who choose abortion are attacked and condemned.

For the way we demonize abortions, the details of what is medically termed a "spontaneous" abortion — a miscarriage — are mundane. The most common cause of a miscarriage is a chromosomal or genetic abnormality in the embryo. Your body senses the irregularity and, as a result, expels the pregnancy.

That is likely what happened to me. No more than 24 hours ago, my body probably recognized a deformation in the cells that were multiplying inside my uterus, then sent signals to my uterus to begin contracting in order to expel the contents. My body knew what to do, but my mind didn't catch up. In fact, in so many ways, it still hasn't. So I'm left here, ignoring the prenatal vitamins sitting on the kitchen counter as I count down the minutes until I have to change another blood-soaked pad, thinking about what it means to miscarry and why this outcome of pregnancy elicits so much understanding and empathy, while another outcome — abortion — elicits so much hatred and judgment.

Miscarriage and abortion are sisters. Just like my body knew what to do when an abnormal embryo implanted itself in my uterus, my mind knew what to do when a healthy embryo found its way to the soft lining of my uterine wall back when I was 23 years old, in an unhealthy relationship, living paycheck-to-paycheck, unwilling and unable to be a mother. They haven't always synced up, my body and my mind, but even separately they've known what to do at different times in my life. I do not regret my decision to have an abortion.

Some of my own friends believe miscarriages are a punishment for abortion.

As I feel another cramp, I know that the same friends who once labeled me a murderer would publicly voice their sympathy and pledge their prayers if I reached out to them, right now, and shared the news of another miscarriage — a kind of hypocrisy you feel like metal on bone.

When I held my son for the very first time, knowing he was a choice I had made, my belief that abortion had been the right decision years earlier only grew stronger. Here he was, a by-product of my mind and my body finally being on the same page; the end result of me being financially, emotionally, physically, and mentally ready to become a mother. But we, as a culture, have difficulty acknowledging these complexities and accepting a woman's inalienable right to make her own choices.

As Dr. Willie Parker, a Christian abortion provider put it in Life's Work: A Moral Argument For Choice:

"A pregnancy that intimates a baby is not more sacred than an abortion. You don't become sacred, like Mary, just because you conceived, and the termination of a pregnancy is not the resolution of an error. It is merely one of the reproductive outcomes.

Like reproduction itself, the way we, as women, process and respond to the varied outcomes of an embryo attaching itself to the inside of our bodies is complicated, nuanced, and assorted. A woman can be devastated by her miscarriage, but her devastation doesn't make the 95 percent of women who don't regret their abortions monsters. A woman can feel thankful, even happy about her abortion, but mourn the loss of a wanted pregnancy years later.

And a woman can sit at her desk, 24 hours after losing a very wanted pregnancy, and still advocate for the right for women to abort their pregnancies. She can feel pain, sadness, and even anger for, once again, having to tell her friends and family members that, no, she is no longer pregnant, while simultaneously fighting for another woman's constitutional right to walk into a clinic and end her pregnancy.

Because this is the inescapable reality of pregnancy — a visceral mess of hope and chance and loss and, sometimes, choice. Of women who might be mothers feeling that possibility become past-tense, and women who know in their gut that they do not want to bring a child into the world choosing to halt the pregnancy. And sometimes, it's feeling a kick from the inside; a very wanted pregnancy coming to fruition.

Perhaps, one day, I will feel another kick, hear another heartbeat, and experience another pregnancy. But for now, and while I am sad and in pain, I will find comfort in the knowledge that every outcome of pregnancy — be it a miscarriage, an abortion, or a birth — is normal. I didn't do anything wrong when I had an abortion. I didn't do anything wrong when I miscarried the first time. Or the second time.

And as I rest my fingers on my keyboard, breathing through another cramp, I know I didn't do anything wrong now, either.

More Like This
I'm Having A Slow Lazy Summer For the First Time In 20 Years & It’s All Thanks To My Son
I’m A Newly Single Mom. How Do I Get Over My Body Insecurity?
30 Marvelous Baby Boy Names That Start With “M”
Dr. Jill Biden Just Delivered Some Frank, But Powerful, Advice On Motherhood