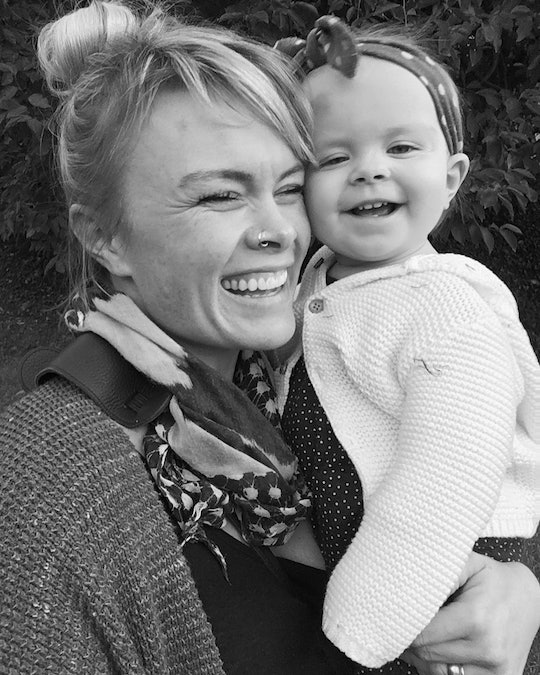 I'm Pregnant For The Second Time, & Feel Like I'm Mourning Something

I finally, belatedly realized I was pregnant with my second child, when I, in a fit of feeling like an 80-year-old woman, made a tuna casserole for dinner one night and, upon smelling it in the oven, immediately felt like gagging. I'd been feeling lethargic and borderline depressed, but attributed it to the wave of overly cold, grey November weather that had descended upon Louisville. There I was: tuna-gagging, with dinner ready, suddenly pretty sure I was pregnant but without confirmation; it was frigid outside, and the idea of packing up my then-14-month-old to go buy a pregnancy test seemed absurd. And yet, I had to know. Right then. So we rolled over to the drugstore, bought a test, and came home to a quick two-minute, very affirmative YES that I was, indeed, pregnant.

I swear that test changed to a plus sign the very second I peed on it.

As a fairly self-attuned person, it seems mildly absurd I didn't know. But, also, we weren't trying, and I had just less than a month earlier weaned my daughter and still not had a period postpartum. I was what I like to call "casually" taking birth control, meaning, my once very systematic self, who had always taken her pill right on the way out the door to work, had given way to mild chaos of a stay-at-home mom life, taking my pill at increasingly varied times of day... and sometimes not at all. So the pregnancy was a surprise, but also not a surprise; I get how babies are made. We were always going to have another baby, and, in fact, I anguished endlessly about when the exact right moment in time would be.

My husband was clearly so proud and excited, and I realized, in that moment, that I was not.

A toddler and a baby always seemed insane to me. A toddler is, for all intents and purposes, a baby, who can run away from you. They need constant supervision, emotional support, and help with daily tasks, but they can also run weirdly fast for how short their tiny legs are. And a newborn is, in my opinion, the worst kind of creature around. I just did not love any moment of newborn life the first time around. Some of that, surely, was unaddressed postpartum depression. Some of it was, as my best friend likes to call it, the "identity assassination" that comes with the arrival of your first child. Some of it was just being really, unbelievably tired. At any rate, having a small person around and another even smaller person just seemed really insane to me.

But, on the flip side, getting too far out of this baby madness and then starting all over seemed pretty insane, too? Plus I really liked the idea of my kids being close in age, for their sake.

That's all just a long way to say; I anguished about the right time, and then life, strongly encouraged by my reckless use of birth control, decided for me.

I quite unceremoniously told my husband, a pilot, over the phone. He was supposed to be gone three more days and it just seemed absurd to keep that information to myself so long. After the initial shock, he was thrilled, shouting "TWO PUPPIES!" again and again. My husband was clearly so proud and excited, and I realized, in that moment, that I was not.

Six weeks have passed since that day; I learned I'm 12 weeks along with a gratefully solo fetus with a very cute head. I feel moderately less like dying than I did on tuna day, but still, I'm not excited.

In fact, just today, I realized, I am in mourning. I am already mourning, as I think is very typical, the imminent end of my time alone with my daughter, my first baby love. I'm mourning the ease (I use this word lightly, certainly very relatively) of toting her around to parks and grocery stores and coffee dates, of having enough arms to hold all my babies. I'm mourning the end of the single solitary moment no one any longer needed my body for their survival — either to grow or to feed — the moment in which I errantly signed up for a terrain race and started heavy weight lifting.

I feel like I just got used to a very new kind of life and now it is already changing again.

I'm mourning my own family being so terribly far away — eight hours of travel at a minimum — which already felt increasingly insane with a toddler and now, in my head, seems actually impossible with an infant and said toddler. I'm mourning them being so far away when I just want someone I can deeply trust and lean on after this newbie comes; when there is no option for "sleep when the baby sleeps," because, likely, someone will always be awake, when my husband is gone for nights on end. I'm mourning the loss of long nights of sleep. I'm mourning the end of a fairly predictable schedule. I'm mourning being able to leave the house alone for any amount of time, not that I do very often, if ever, but I am mourning just the feeling that I can go. I'm mourning red wine with my pasta.

I'm just in mourning. I feel sad. I feel like I just got used to a very new kind of life and now it is already changing again.

I realized I was sad and then one day, my daughter woke up from her nap, and the moment I picked her up, I just started bawling. Big, ugly, gasping, audible cries. She looked at me somewhat petrified and then started to cry, too. For a moment, we sat on the couch, holding each other and both sobbing. I am all for having real feelings and experiences in front of your children, but I quickly realized I was terrifying her and reined it in. It was a really low, but also revelatory moment for me.

The revelation was that whatever I am afraid of, it will turn out just fine. I might be overcome by fear or exhaustion — it might infect the space around me for a moment — but when it is time, I know how to gather myself and keep moving. Because that's just what mamas do. We might think we cannot move or give or stay awake or love anymore than we have... and then we do. For all my stress the first time around, I really learned that to be true. I learned that mothers are warriors; they are gentle beasts; they are survivors. There is something so primal about motherhood, our deeply ingrained, biological drive to nurture and protect our babies. It transcends all.

That doesn't mean I won't be tired. That doesn't mean I'm not still, in this moment, feeling pretty sad, really just mourning the approaching end of a life I've built that I really love. But it does mean, whatever it looks like, it will all be OK.