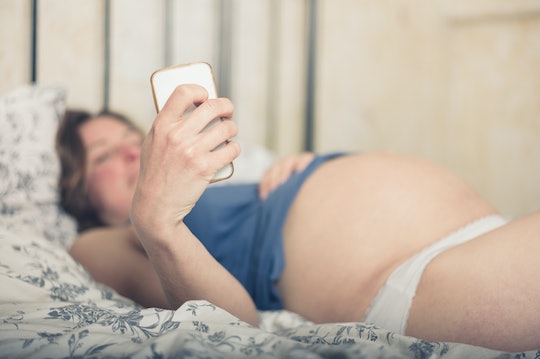 I'm Pregnant With Low BMI & Here's What It's Like

This is not another installment of "Skinny Girl Humble Complains." I won't be whining about all the milkshakes I have to consume or how hard it is to find size 0 maternity jeans. No, this is a recognition that the way people experience pregnancy varies. Some get gestational diabetes or have to navigate a pre-existing condition. It's helpful for women to know they're not alone and for the rest of us to understand and empathize. It's no different for women who go through pregnancy with a low body mass index (BMI), and I'm here to tell you what that's like.

I've always been thin, with the exception of when I was born. I weighed almost 9 pounds and was 22.5 inches long. However, it wasn't long before I was below the 5th percentile on the growth charts. Later, I wasn't even on it. My stepdad remembers that when he met me at age 7, I was wearing size 2T shorts. By high school, I didn't technically weigh enough to sit in the front seat of my mom's van. It was around that time that so-called "friends" found it necessary to report me to the school counselor for possible anorexia.

I didn't have nor have I ever had an eating disorder. I was a late bloomer, getting my period about six months after I turned 16, but I started to fill out in college. I hit a growth spurt that lasted from my junior year in high school to my freshman year is college and ended up taller than average as well, which no one (especially the pediatrician who predicted I'd be 5'2") expected. As an adult, I'm a comfortable weight for my frame, but with a BMI less than 18.5, I'm considered underweight. Maybe it was naive of me, but I never really considered how having a low BMI might affect a future pregnancy.

If and when you do get pregnant, you will automatically be labeled high risk.

For one, it can be a challenge to get pregnant in the first place. I got pregnant with my firstborn right away, but trying to conceive a second time was much more challenging. According to the Southern California Reproductive Center, a low BMI can mean fertility issues. The fact is, you need a certain amount of body fat to conceive. That's because sex hormones are stored in the body's fat layers. Low BMI can also affect how much estrogen you produce. If you have an abnormal (or absent) menstrual cycle due to reduced estrogen, you're obviously going to have problems conceiving. Not all underweight women will struggle to get pregnant, but many will have to make some lifestyle adjustments, including a higher-fat diet and curtailing their exercise regimen.

If and when you do get pregnant, you will automatically be labeled high risk. When it happened to me, I assumed it had something to do with my age rather than my weight, but not so. According to Livestrong, women with a low BMI are 72 percent more likely to miscarry in the first trimester, although this can be mediated with nutritional supplements. In a study published in the International Journal of Epidemiology, researchers found that underweight mothers are at higher risk of both pre-term birth and low birth weight. What this all means is that your doctor or midwife will be watching you a little more closely than they otherwise might.

Another unexpected part of a low BMI pregnancy is that you may have additional ultrasounds.

Your provider will likely recommend that you gain more weight than is standard. According to the American Pregnancy Association (APA), if you have a BMI of less than 18.5, you should aim for a weight gain of 28-40 pounds. For both my pregnancies, my midwife recommended that I gain 35-45 pounds (I gained 40 with my daughter). Adding 300 calories a day is a good way to accomplish this goal. Granted, that's not permission to binge on ice cream and pizza. Expectant moms with a low BMI want to get the most bang for their nutritional buck. That means foods that are high in healthy fats, such as avocados and fish. My midwife has encouraged me to drink whole milk and real fruit juice.

Gaining weight isn't always that easy. If you're underweight, you probably have a high metabolism, making packing on the pounds difficult in the first place. For many women, nausea and vomiting of pregnancy can wreak havoc on their appetite, too. I had hyperemesis gravidarum for both of my pregnancies, and it was extremely challenging to keep anything down. I focused on not losing weight and ate a spoonful of peanut butter as often as I could. Weight gain can bring up many feelings for women who suffer or have suffered from eating disorders. Whether or not this is the case for you, you should be prepared for the question and to answer honestly. Providers are trained for this and should be able to put women in touch with additional support, such as a dietician or mental health professional.

One of the most obnoxious things about being underweight during pregnancy isn't medical at all. It's the skinny shaming.

Another unexpected part of a low BMI pregnancy is that you may have additional ultrasounds. The American College of Obstetricians and Gynecologists only requires one, usually between 18 and 22 weeks, but that's for an uncomplicated pregnancy. Your provider will likely want to check in more often to ensure that your baby is measuring correctly, and a sonogram is a good way to do that. I'm already scheduled for a 30-week ultrasound. The doctor admitted that this practice is more "voodoo" than science (his words), but I'm OK with any opportunity to check in on my baby's growth.

One of the most obnoxious things about being underweight during pregnancy isn't medical at all. It's the skinny shaming. If you think that's not a thing, just ask Duchess Kate, whose pregnancies are already under the microscope but who also gets accused of "pregorexia." Underweight moms hear everything from they're not eating enough to they won't be able to breastfeed. You'll likely be told you're "all belly," but it's not necessarily a compliment. In fact, it just sucks. Your weight is no one's business but yours and your provider's, and it shouldn't be acceptable for a stranger to tell you it looks like you swallowed a basketball.

Everyone experiences pregnancy differently, and just because it's more socially acceptable to be thin doesn't mean we should diminish what underweight expectant moms go through. They deserve know what they can expect as much as the next person, and they have the right to own their experience.