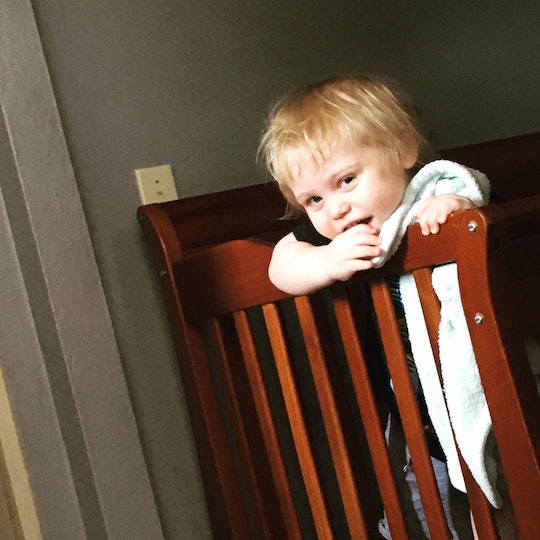 My kids have always been really crappy sleepers. With my older two, I snuggled them to sleep, woke up with them, and let them crawl into my bed. I didn't want to sleep train them, and thought losing sleep myself was the only way. I changed my tune when my youngest was born. I wanted a different set-up, so my partner and I decided to sleep train and things went better than I expected. Hell, it was magical... until it wasn't. Now, I’ve fallen back on old bad habits. Now, I'm re-sleep training my toddler.

Yes, I know this is 100 percent my fault. My son was falling asleep fine until he started growing his molars, which brought on a very big sleep regression. Out of desperation, I found myself relying on what the experts call "sleep crutches" — snuggling him to sleep or sleeping next to him. So now I'm back to square one, sacrificing precious evening time rocking my toddler to bed instead of hanging out with my husband, working out, or just watching something on TV that is decidedly not meant for children.

It's just that, well, the snuggles work so well! Almost too well. My son is instantly calm when a warm body is next to him, and the soft sound of my breathing is like a lullaby. And when I attempt to sneak out of his bed like a desperate, exhausted ninja, his eyes will pop open and he will usually start to cry — a sound that makes my heart hurt and my anxiety go through the roof. So, I will inevitably get back in bed with him, and start the process all over again... sometimes multiple times a night.

In my over 10 years of parenthood, I’ve read pretty much every book and article about sleep. I've done early bedtime, which is so hard when you work during the day and have just a few hours with your kids each night. I've purchased white noise machines and black out curtains. I've created detailed bedtime routines, based on the latest research. I've purchased books that are supposed to magically induce sleep, and downloaded lullabies and guided meditations.

For toddlers, I don't consider it 'sleep training' or harmful, since it's more about behavior modification.

And now, I'm reaching out to a sleep training expert again. Christine Stevens of Sleep Solutions by Christine spoke to me via email about how to go about essentially re-training my child to sleep on his own. Fortunately, according to Stevens, all hope is not lost. "It is possible to make changes so your child sleeps all night long no matter how old they are," she says. "Getting your child to sleep all night long and seeing results will depend on the amount of time your child has grown used to the new habits, what those new habits are, and how consistent your are with making changes."

Step one, says Stevens, is to make a plan. "First, determine what your boundaries around sleep will be," she tells me. "For instance, if your child is now sleeping in your bed, and both parents agree you want them in their own bed, then stop letting your child sleep in bed with you even when the child protests."

For my partner and I, the boundary we'd like to set is not having to snuggle our son to sleep for hours at a time every single night. And since that's our boundary, we've both made a commitment to give sleep training another try. Armed with information, a color changing alarm clock, cozy bedding, and bedtime snacks, we’ve decided we're going to do this thing. Again.

According to Stevens, it's important to be consistent, meaning that we need to actually stick with any attempt to sleep train for more than just a night or two if we want our son to figure it out. "It will take time for your child to get used to the new routine, but within 1 week, your child will be back in their own bed," she says.

You have to give changes time to set in. Trying something for one or two nights won't show results. It takes about three to five days to form a habit, so give it time.

While I'm comfortable giving this a go for a week, I'm also a tad concerned that I might hurting my son, who generally will work himself into a frenzy, pound on the door, and cry real tears until one of us rescues him. Like, will he hate me or think I've abandoned him?

Thankfully, Stevens says no. "For toddlers, I don't consider it 'sleep training' or harmful, since it's more about behavior modification," she tells me. "If parents are supportive, the child won't feel 'abandoned.' I use different methods to help children fall asleep independently, and they don't involve saying 'night, night, see you later!' and leaving a child alone."

Instead, she recommends parents find an approach that works for their family. For us, that will mean gradually phasing out bedtime snuggles and moving the chair next to his bed towards the door, until he learns that we are still around but also that he needs to sleep in his own bed until morning.

"Parents can be as supportive as they want to be when they are making changes to their child's sleep routine," Stevens says. "You have to give changes time to set in. Trying something for one or two nights won't show results. It takes about three to five days to form a habit, so give it time."

I know it's all easier said than done, and it's easy to break down and give into your tiny toddler's demands when you're incredibly sleep deprived, I’m determined to hold myself and my husband accountable. We need to present a united front and re-sleep train our toddler — not just for us, but for him, too, so he can learn how to sleep by himself.

Hopefully, and soon, he will be sleeping through the night. Like the old saying goes, "If at first you don't succeed, try try again."

More Like This
Should You Be Giving Your Toddler Melatonin To Help Them Sleep?
17 Best Potty Training Products For Toddlers
Here's When Your Baby Might Start Sleeping Through The Night For Real
These 4 Sleeping Positions Will Keep You Comfortable After A C-Section