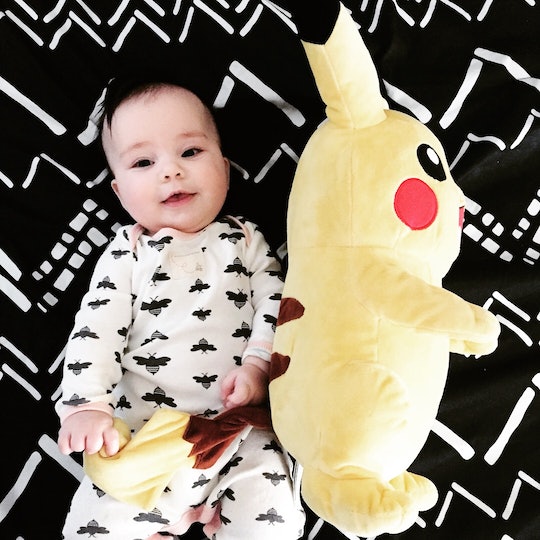 You Might Think My Flu Prevention Strategy Is Extreme, But We Need To Do More

A few days ago, a friend of mine asked if I wanted to have a get-together with our babies at our local mall. “Maybe in a few weeks,” I told her. “Or, actually, maybe later this spring.” It’s not that I had other plans, or that my schedule was too jam-packed that I couldn’t fit in an afternoon of trying on makeup at Sephora. My reason? I’m legit terrified of my baby catching the flu.

Some people might say that I’m overreacting, but this year’s flu has been particularly deadly. A recent report revealed that the levels of flu illness have reached the same peak as 2009’s swine flu pandemic, per the CDC, and they’ve also surpassed the severe flu outbreak of 2003.

What’s even scarier are the numbers themselves. The CDC recently noted that the flu is killing up to 4,000 people every week — and the death toll might continue to rise. According to Anne Schuchat, the CDC’s acting director: “More deaths are likely to happen.” She added that “over the next few weeks, we do expect and it would make sense to see more pneumonia and influenza-related deaths. The people who are likely to die are already in the hospital.”

And while this year’s number of pediatric deaths (63 and counting) is considered to be "normal" (flu season can cause a range of 37 to 171 pediatric deaths a year), it’s hard to think in terms of numbers or logic when your baby is involved. One of the reasons why the flu spreads so quickly is that 20 million Americans can’t afford to stay home sick, especially those in low-wage jobs like retail or food service (hence, the mall). Of course, it’s not just employees that could be carrying the virus — any place where there’s a large crowd of people inevitably increases your chances of catching any germs.

For me, the issue is compounded by the fact that my baby is only 5-and-a-half-months-old and hasn't had her flu shot yet. The flu vaccine is typically administered to children 6 months and older, so she'll receive it at her next check-up in March. And even though my husband and I have both been vaccinated, having the shot doesn’t fully guarantee that we won’t catch the virus if we come in contact with it.

Of course, some outings have been unavoidable. I had to take my daughter to the pediatrician last month for a checkup, for example. But, I’m not going to lie, I felt completely paranoid the whole time. I side-eyed other children in the “well” area, giving them a death-stare if they even so much coughed or sneezed once. I made sure to use hand sanitizer any chance I got, and I opened doors with my sleeve instead of my hand. I never used to be like this, but this year’s flu season has literally turned me into a bona-fide germaphobe.

Outside of our trip to the pediatrician, the only times my daughter and I have left the house together have been to grab coffee via the drive-through on days when I’m truly getting cabin fever. Other than that? We’ve been inside, waiting it out. And I’m not going to lie — it’s boring as hell. My day has become an endless cycle of watching my baby play on the floor, feeding her, and putting her down for naps. It feels like the early days of motherhood when I felt chained to the house because I had a newborn who nursed constantly. I’m sure my baby would love nothing more than a trip outside into the world — there would be so much for her to look at — but, honestly, it just isn’t worth it.

Luckily, the light at the end of the tunnel is near — or at least, getting closer. Kristen Nordlund, press officer for the CDC, told The Cut that flu activity tends to “peter out” as the weather gets warmer. On average, “peak” flu season can happen as early as November or as late as March — although, according to the CDC, sometimes it can last even until May.

So, if you need me, I’ll be hanging out inside my apartment until spring. And maybe it’s a little crazy, and maybe I’m being a little extreme. But I’d rather be bored all day than have to deal with a flu-ridden infant. And, hey, the mall will still be there in a few weeks — with plenty of summer trends in stock.

More Like This
Adult Gymnastics Brought Me Back To Myself
Abbot's Formula-Producing Plant Can Reopen In As Early As 2 Weeks — Now What?
Can You Help Your Baby’s Hair Grow?
Here’s What You Need To Know About That Viral 1960s Baby Formula “Recipe”