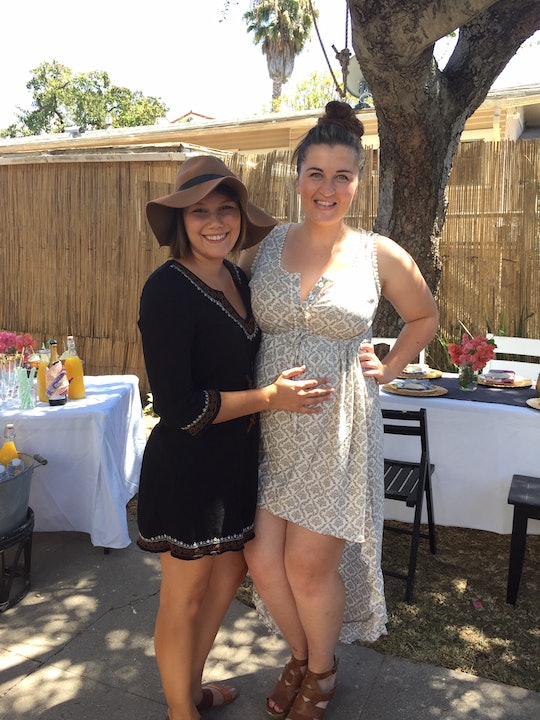 I've never had an issue making friends. Well, either that, or I’ve just been cool with not having many friends and hanging out by myself. I remember during my pregnancy that I'd get suggestions or referrals to Mommy Yoga or Mommy and Me groups and at the time, I'd just politely nod and then hope that people would never mention these events to me again. The thought of making mom friends gave me anxiety because I realized that making "mom friends" meant I'd have to accept my new role as "mom" and I don't want to lose myself. At my appointments, my OB reiterated over and over again how great it would be for me to make friends with other women with kids, especially because my relationship with my child’s father ended during the eighth month of my pregnancy and I was all alone. I understood what she was trying to do; of course it was important for me to have the support of other women, especially other moms, as I learned to navigate my way through single motherhood.

I thanked her for her insight, but couldn’t bring myself to tell her that frankly the thought of making mom friends gave me anxiety for more reasons than one. Now, don’t get me wrong, I have friends who happen to be mothers as well, but I’ve never sought out female friends solely for the fact that they're moms. Doing so scares me. A lot.

The first reason making mom friends gives me anxiety is that I know I'll be self-conscious of other parents judging my parenting style. No two moms are the same (just like no two women are the same), no matter how similar their parenting philosophies are. And often times, it shouldn't be surprising that people whose views on childrearing differ from yours don't have a problem letting you know. Hell, even people without kids voice their opinions on others' parenting styles. Because I know myself, I know that having friendships built exclusively around the shared fact that we're both moms means that I'd be constantly second-guessing my every move. That thought alone seems so exhausting to me that it's exactly what holds me back from going to Mommy and Me groups or even actively seeking out new-mom friends.

The thought of the social interaction with new parents and people who don't know me, my son, or our story is extremely scary for me.

Ironically enough, something else that gives me anxiety about making mom friends is the fear that I'll be the one judging them. I’m not the type to verbally express myself when I disagree with someone else’s parenting decisions, but I do know that I typically won’t associate myself with people I don’t see eye-to-eye with. I don’t want to attempt a new relationship with a fellow woman with kids and then eventually ghost on her because I can’t deal with how she is with her child. I don’t want to be that person.

My son is almost a 1 year old now. He's already walking and it's apparent that he's going to need a different form of social development other than interacting with just my parents and me. The time is coming when park visits are going to become a part of our weekly, if not daily, routine. Daycare has also been a topic of conversation in our household, and it's on my mind frequently as I become increasingly ready to leave the comfort of my parents' home. The thought of the social interaction with new parents and people who don't know me, my son, or our story is extremely scary for me.

Before I had my son, I was the type of friend you could call at 3 a.m. or could spend the entire day with doing absolutely nothing. That's not the case now. Hell, I can hardly text back half of the time. And now I'm scared that I'm the one becoming too physically and emotionally inaccessible to my child-less friends.

There is also a big part of me that wants to hold onto my old self and my “before baby” self. I want my old friends to be my new friends, the ones who help me leap from woman to woman with kid. In some way, I feel as if I’ll be letting go of the parts of me that were there before I had my son by making all new friends with women just because they're moms. I also don’t want my friends who don’t have kids to feel like they can no longer relate to me. I can hear in my head how utterly irrational that is, but it really does cross my mind, especially in situations where I'm out at dinner with them can't fully immerse myself in what they’re saying because I’m busy wrangling my little guy.

As I delve further into motherhood, I feel like I'm walking further and further away from my pre-baby friends and my pre-baby life. It would be unfair for me to assume that once I make new mom friends that all topics will be kid-related, but in reality, I actually worry more about having so much in common with these women that I'll be the one who can no longer relate to my old friends. Before I had my son, I was the type of friend you could call at 3 a.m. or could spend the entire day with doing absolutely nothing. That's not the case now. Hell, I can hardly text back half of the time. And now I'm scared that I'm the one becoming too physically and emotionally inaccessible to my child-less friends.

I don’t think making new mom friends is a bad idea. Making friends with the women going through the same things I am will help me to feel like I'm not lost on an island by myself. But right now, I just feel anxious to try and make these new connections and venture completely into motherhood. I want to remember that I'm still me.