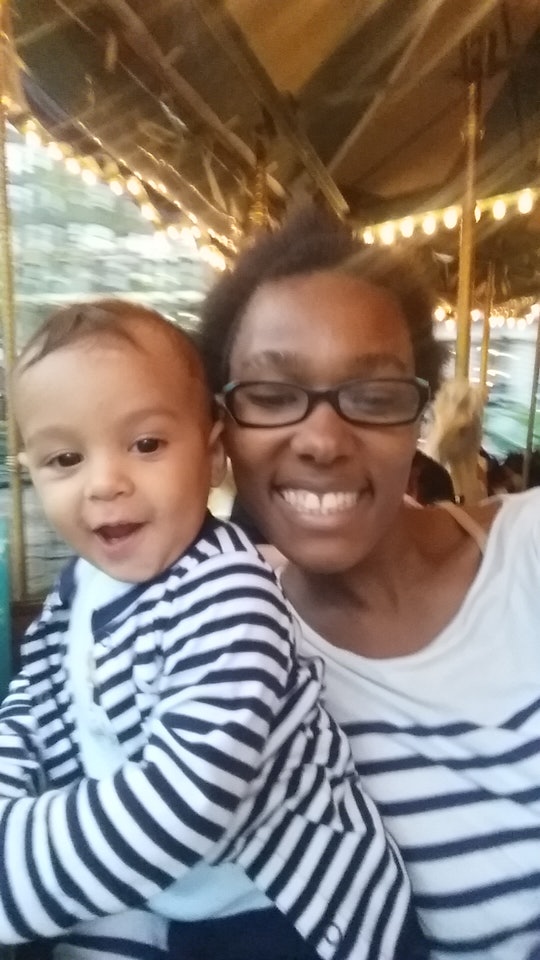 TBH, I'm So Glad I Had A "Natural" Birth

During my younger days, long before I was even thinking about having children, I was sure that I was going to have a medicated birth. The idea of having an unmedicated labor just didn't seem like a possibility for me. Pain is not something I handle well, and the thought of contractions and labor and the entire childbirth process made my nether regions hurt just thinking about them. Even during my pregnancy, I was still on board with having an epidural. I am not a martyr, and I was willing to admit that I was terrified of being in any sort of pain. Before I was pregnant, I loved watching TV shows about childbirth, even though seeing women in labor made me anxious. On shows like TLC's A Baby Story, the women were so miserable, and then they’d get the epidural and they were lighter. They were happy, jovial — pleasant, even. That’s what I wanted to be like while I was in labor.

I told my boyfriend that I was pretty much down for the drugs and he was on board. He didn’t even like seeing me with a headache, so the thought of seeing me in pain during labor was already making him nervous. In the months leading up to my child's birth, I was confident I was going to get an epidural — but let's just say it didn't necessarily work out that way.

I didn’t really even begin to think about the prospect of having an unmedicated birth until I went to a childbirth class. The woman who taught the class didn’t push any particular agenda as far as having a medicated versus unmedicated birth. She just wanted to make sure that everyone had all of the information available to make the most informed decision for themselves in the moment.

She looked genuinely sad for me as she told me that it was too late for any sort of medication. "Can I have an Advil, then?," I asked, weeping.

After the class, I started considering having an unmedicated birth. I felt that since I had pain management tools, it might not be so bad to go without drugs, and if worst came to worst, an epidural could still be an option. My boyfriend was supportive either way, because, well, it was my body and he didn’t really get a say. He figured that if I felt capable enough to not need the drugs, then he could be strong enough to support me through childbirth, even if he was worried about me. I didn’t have a written birth plan, but I told my boyfriend not to try and talk me out of medication if I asked for it. He was more than willing to agree.

One thing we learned in the childbirth class that stuck with me was that we should labor at home for as long as we could stand it, so we could be most comfortable during labor. I liked the idea of being able to move around during labor and my teacher explained that even if I didn’t get the epidural, there was a chance that I would spend a lot of time confined to the bed during childbirth. She also talked about the dangers of getting an epidural too early in the process, warning that it could possibly stall or slow labor. (I later discovered that she was probably wrong about this.)

All of the dancing and stretching I had been doing to alleviate the pain wasn't working anymore. I knew then that things were getting serious.

When I started having contractions, I initially thought they were Braxton-Hicks or "practice" contractions, because they were surprisingly tolerable. I thought that they were going to be a lot stronger and painful than they were, so I decided to stay home until they became unbearable. When we got to the hospital, I decided, I could get an epidural.

After I had been in active labor for about six hours, things finally got uncomfortable. My contractions were consistently about seven minutes apart and they were strong. All of the dancing and stretching I had been doing to alleviate the pain wasn't working anymore. I knew then that things were getting serious. As we drove to the hospital, I told my boyfriend that the first thing I was going to do was ask for drugs, because the contractions hurt a lot.

I couldn't even walk into the hospital. The triage nurse had to physically lift me onto the exam table. “Please, can I get something for the pain?” I begged. The nurse told me that she had to check me first. When she checked me, I was completely dilated, thinned out, and ready to begin pushing. She looked genuinely sad for me as she told me that it was too late for any sort of medication. "Can I have an Advil, then?," I asked, weeping. I knew that Advil wouldn't do much, but my contractions hurt a lot and I was desperate. After about an hour of excruciating pain, my son was born.

I didn't end up getting my epidural, but I realized at some point during the childbirth process that I was strong enough to do without one. Once I trusted my body it did what it was supposed to do without the assistance of drugs.

I didn’t forego the epidural to be a martyr. I just did it because I didn't have a choice. That said, if I do end up having more children, I'm still not against the idea of having a medicated birth. After all, if there's anything I've learned anything about labor, it's that you just have to let it happen the way it's meant to happen.