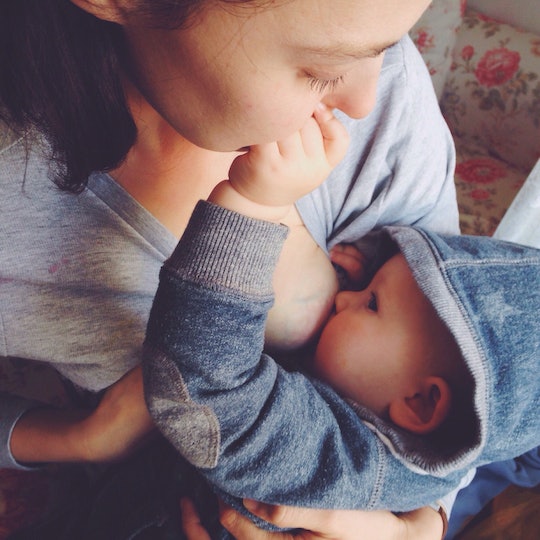 I'm So Sick Of The Term "Extended Breastfeeding"

When I started breastfeeding — about an hour after my kid was born — I was hoping to breastfeed for at least a year. At the time, I anticipated returning to work at my retail job in a couple of short months, and pumping at least some of that time to be able to feed my growing baby. Breastfeeding in those early days was very difficult, and I felt the way that I think a lot of parents who are new to breastfeeding feel, which was, “I just have to make it to a year.” I knew that I could breastfeed past my son's first birthday, of course, but at the stage when breastfeeding felt daunting and sometimes nearly impossible, one year was the goal. I would somehow, whatever it took, manage to breastfeed for one calendar year, and anything after that was gravy. But these days, my life has shaped up to be very, very different.

I lost the retail job, I now work from home, and I’m not 100-percent sure where all the parts of my breast pump even are anymore. I’m also still breastfeeding, and my child will soon be 15 months old. Far from feeling like something “extra” at this point, breastfeeding my child beyond his first birthday feels like the most normal and obvious choice for us as a family. And I’ll tell you something else: I’m so incredibly sick of the term “extended breastfeeding” that it practically makes my ears ring when I hear it.

It is not “extra,” it isn’t “bonus breastfeeding,” it’s just plain old regular breastfeeding. My child continues to get nutritional and emotional benefits from breastfeeding, and I continue to provide.

But look, if we’re going to say there’s nothing wrong with stopping breastfeeding at six weeks or six months or 12 months because it’s wrong to judge parents who are just trying to do their best, then it also follows that we shouldn’t judge parents who breastfeed past one year. And I don't actually think that is what people are trying to do when they use the phrase "extended breastfeeding." I think most people mean it to be neutral, in fact. The American Academy of Pediatrics recommends that infants be exclusively breastfed for the first six months of life, and that breastfeeding continue up to the one-year mark and for "as long as mutually desired by mother and baby." In the U.S., extended breastfeeding is the commonly accepted terminology for breastfeeding past 12 months. And while I’m certain that most people are just using the commonly accepted language, the terminology of extended breastfeeding feels subtly judge-y and just… totally unnecessary, in my opinion.

Because the breastfeeding that I am doing right now? It turns out it is not “extra,” it isn’t “bonus breastfeeding,” it’s just plain old regular breastfeeding. My child continues to get nutritional and emotional benefits from breastfeeding, and I continue to provide.

To arbitrarily mark his first birthday as the cut-off point and declare than any breastfeeding that happens after that point is “extended breastfeeding” feels, to me, like treating the one-year mark as the finish line. And while I understand why individuals may need to do this, it bothers me deeply that in our larger culture, this is the way that we talk about breastfeeding. “Extended breastfeeding” says that one year of breastfeeding is good and adequate, and anything after that is granting your child an “extension” on the breastfeeding relationship. It sounds very much like the kid has outrun the clock, and is now on borrowed time. And while it may be perfectly safe to wean after one year, it isn’t as though there’s some magical switch that's flipped and children no longer need or want breast milk at that point. In fact, many children continue to want to breastfeed for a good deal longer, and the World Health Organization actually recommends breastfeeding up to at least two years of age or beyond, and in many cultures, that is indeed the norm. According to the British United Provident Association (BUPA), in predominantly Muslim countries, women are encouraged to breastfed their children for "approximately two years," because breastfeeding, according to the Qu'ran, is viewed as a religious duty.

I think that the reasoning behind the language comes from the fact that we still live in a formula-feeding culture. In the first part of the 1900s, breastfeeding rates fell while formula feeding rates rose. According to "The Resurgence of Breastfeeding at the End of the Second Millennium" published in The Journal of Nutrition, breastfeeding rates from 1911-1915 were 70 percent of women, and fell to 50 percent in 1926-1930. They continued to fall from 1946-1950 (just 25 percent), and in 1972, only 22 percent of women said they breastfed. While my mom did try to breastfeed, her own mother did not, and according to my mom, that's because she was told if she formula fed she "could eat whatever she wanted." Because our grandmothers, and to some degree our mothers, were told that formula was the "good and modern way to feed a baby," we who breastfeed in the United States currently still feel like we're doing so more or less on our own, without a real culture of breastfeeding. One ad in particular urging women to formula feed read,

In the study "Infant Feeding in the 20th Century" published in The American Society for Nutritional Sciences, researchers noted that by the early 1970s, only 25 percent of infants were breastfed at one-week postpartum and only 14 percent were breastfed between 2 and 3 months old.

Growing up, I knew that some moms breastfed, but even though I grew up around a ton of younger cousins, I didn’t see a mother breastfeed until I was 19 years old. And while doctors told me I should breastfeed, I also ran into medical professionals who just assumed I was formula feeding. The one time we had to take our baby to the emergency room, the ER doctor (whom we'd never met before) didn’t bother to ask how we were feeding our then-7 month old, she just recommended we give him clear liquids for 24 hours and then “advance to formula” and left the room. When I asked the nurse what we should do in the case of breastfeeding, her only reply was, “oh, um, I guess you would do the same thing, just with the breast milk?” It was incredibly frustrating to feel like feeding my child in the recommended way somehow made me weird or somehow other.

I remember when I was looking up infant feeding and sleeping schedules, the vast majority of them were centered around formula-feeding schedules. They had just been altered to include "formula or breast milk" at the "appropriate" feeding times, but breastfeeding is in fact different than formula feeding, and those schedules aren't always the best for the breastfed baby. While many of us have moved on and learned the many ways feeding our children from our own bodies is profoundly different than bottle feeding, the bulk of the mainstream conversation does seem to be, “I guess do the same thing (as a formula feeder), just with breast milk," just like with those feeding and sleeping schedules mentioned above. And formula-feeding parents are told that in most cases, at 1 year of age, they can stop formula and switch over to cow’s milk, in addition to the solid foods their child's eating. So yeah, from that perspective, I can see how breastfeeding after one year must look like an extension.

I already get enough weird looks when, after my toddler destroys massive amounts of food at a restaurant, I whip out my boob and he happily breastfeeds. I don’t need the technical language we use to describe breastfeeding to mark what I’m doing as somehow extra and excessive as well. Instead, I think we need to normalize breastfeeding so that more breastfeeding parents can do so safely and comfortably. How on earth can we do that when lines are drawn in the sand about which breastfeeding is “normal” and which is “extended"? To be honest, I don’t think we can.