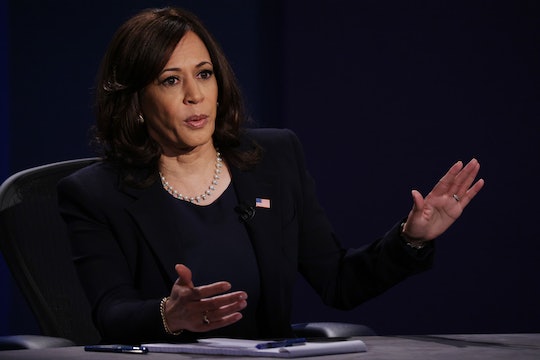 One Phrase We Need To Be Teaching Little Girls Everywhere? "I'm Speaking"

For every time a woman has been in the middle of a sentence only to be cut short by someone who thinks they have something more important to say. For every time a woman has been made to feel like her voice doesn't matter quite as much as the man in front of her. Sen. Kamala Harris spoke for women everywhere when she told Vice President Mike Pence "I'm speaking" during the first and only vice presidential debate. But her words also served as a reminder that this is one integral phrase we need to teach every little girl from this moment forward.

When the Democratic vice presidential nominee took the debate stage on Wednesday night, she had a mighty challenge against her. Pence is a white man with a considerable amount of power. As vice president, a man who is accustomed to having his voice heard and controlling the conversation. Harris, on the other hand, is the daughter of two immigrants. A woman of color who has had to fight to get to that debate stage. As she noted when she spoke of her mother, Shyamala Gopalan Harris, on Wednesday, "I think about my mother... the fact that I am sitting here right now would make her proud. It is because of my mother who came to U.S. at 19, gave birth to me at 25. I think I am sitting here that will make her proud."

Beyond her own mother, Harris undoubtedly made women everywhere proud on Wednesday when she refused to be interrupted. Every time Pence attempted to speak over her — something that happened a total of 16 times during the debate, according to Vox — Harris calmly said, "I'm speaking," with a raised eyebrow that brooked no argument. It was a moment that should be shared with little girls everywhere.

According to The New York Times, Harris is only the fourth woman in American history to speak on the debate stage and the first woman of color. As the running mate for Democratic presidential nominee and former Vice President Joe Biden, she was clearly prepared to defend herself and ensure her voice was heard on Wednesday. Perhaps especially after the 2016 presidential election when President Donald Trump not only interrupted his opponent Hillary Clinton a record 51 times during one debate, as The Atlantic reported at the time, but also stood over her as she spoke in a stance of physical intimidation.

Harris' consistent, calm use of the phrase "I'm speaking" quickly went viral, with women sharing messages of gratitude to the VP nominee. "Kamala Harris' 'I’m speaking' last night means the world to women everywhere that have been called 'bossy,' 'b*tch' etc. just for standing up for themselves around men," one woman tweeted. "It makes me so freaking happy that little girls will grow up in a world where we showcase strong women."

One mom tweeted that she wished when she was a young girl someone had taught her to "fight for my space with 'I'm speaking.'"

"I can tell you it will certainly be passed on to my young daughter today," she added. "That she must use it, even when everyone tells her to be silent. All our voices matter."

Another said she was grateful that clips of Harris telling Pence "I'm speaking" have gone viral across social media. "I tear up every single time," she tweeted. "For women, girls, people of color... wow. THIS is the America I want to live in."