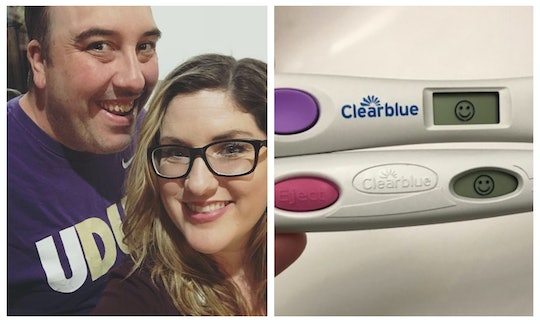 I *Know* That This Time I'm Pregnant, Until It Becomes Medically Impossible

Jessie has been married for three years and trying to conceive for one year. This is the second installment of her Trying diary; read her first here.

The start of a new cycle reminds me of the feeling I get at the beginning of a new quarter in college. I feel full of hope and the possibilities feel endless. My head is full of those annoying clichés that you see plastered all over that one annoyingly encouraging chick you knew in junior high's Facebook wall. There is nothing that I can’t do! It’s all mechanical pencils with new lead and new boxes of tampons in assorted sizes.

Instead of spending $250 for a biopsychology textbook, I’m spending $39.99 for sticks that I will dip in a cup of my own piss, and instead of memorizing the differences between SSRIs and tricyclic antidepressants, I’m tracking what my cervical mucus looks like. Every. Single. Day. There are obviously thousands of other ways these two events are vastly different, but I’m specifically talking about the way they make me feel, and that has motivated me to my core.

Because of my PCOS, my doctor has advised that I use only the digital ovulation predictor kits, or OPKs. These kits help to detect when a woman’s body has a surge in LH, or luteinizing hormone. This surge happens just before ovulation and can be incredibly helpful in pinpointing the best time to have sex when trying to conceive. When you have PCOS, kits that aren’t digital can be difficult when trying to detect your LH surge because the test line must be as dark or darker than the control line to indicate a surge, and this syndrome can sometimes produce dark lines even when there's not an LH surge. The digital kits are ridiculously priced and more expensive than the traditional tests, but at this point in my cycle, I’m not even upset about it yet. I’m still in that phase where I’m just so damned stoked that I had a period all on my own and I get to start fresh.

Frustration builds as I dip stick after stick in the cup and come up with that empty circle. Is it going to happen this cycle? Will I even ovulate? Do I need to email my doctor? This seems pretty late... No don’t email him because he’ll just want to stick you with a needle and then as soon as you do, it will happen.

There it is. That solid smiling face staring at me, practically shouting at me to text my partner to get his ass home. And everything is awesome, just like when I take that first big exam of the quarter and my grade goes up enough to give me a 4.0. I’m not thinking about the next assignment, just as I am not thinking about the fact that the smiling face in my hand doesn’t necessarily mean that I will ovulate. Everything is great, and this is going to work.

Wondering if there is a baby forming inside of you while knowing that it isn’t medically possible for you to find out immediately after doing the deed is maddening.

The two-week wait is on deck, and I don’t have an analogy for this one. I just hate it so much. They say you aren’t supposed to stress, but this is absolutely the most stressful part about trying to conceive. Wondering if there is a baby forming inside of you while knowing that it isn’t medically possible for you to find out immediately after doing the deed is maddening. It feels like your brain has a mosquito bite. It itches, and you can’t scratch it, and there isn’t any other damn thing in the entire world you can focus on that will deter your train of thought. Next stop, Baby Depot.

After the two-week wait, and enough money spent on pregnancy tests to start a college fund for our potential offspring, I have begun my second-most-hated part of this process: counting days past ovulation and weighing that against likeliness of getting a positive pregnancy test. It’s vaguely reminiscent of the process that I go through toward the end of my school quarter when I'm trying to weigh the likeliness of getting above a 3.5 in a class by inputting hypothetical grades on future assignments into Canvas. If I get a negative test on 15 DPO (days past ovulation) it doesn’t mean that I’m out of the running… If I get a negative test on 18 DPO, it’s cutting it close but it could happen — and so on.

After a few faint lines across multiple brands, and no period in sight, it’s time for a blood draw. It’s Monday, and if I get it done early enough, the nurse can have the results back to me by end of day. It isn’t my favorite process, but it doesn’t bother me anymore. It’s going to be all right. It’s negative, I’m sure, and at this point I just can’t wait until I have an answer and can move on to the next part where I get to start over fresh and feel hopeful again. The email comes with the lab results, and the results are negative. I’m devastated and feeling beyond low when my phone immediately chimes again to tell me I have another email.

I have been accepted to my dream university and the undergraduate program that I have been working toward for the past two years. A new quarter will be starting in autumn, and I can feel the hope already building.

I’ll buy new notebooks and pens, a new planner, and perhaps a new laptop. The new quarter will begin and I will have new goals to work toward. There will be moments when I feel on top of it all, and moments when I’m doubting myself, crunching the numbers to put my mind at ease, and leaning on my friends and family to remind me that I am worth so much. I may not be pregnant now, but a new cycle is on its way, and with it comes possibility.