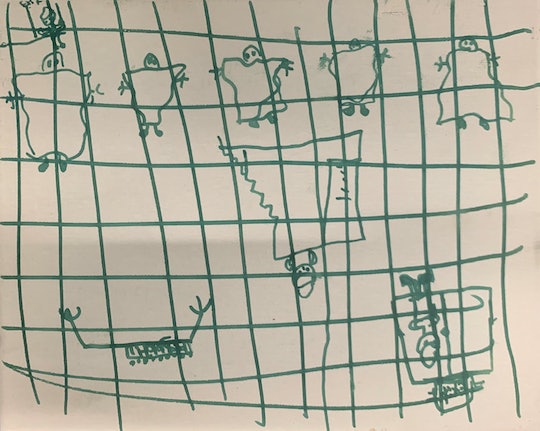 The headlines are shocking, the stories we hear from those on the ground advocating for immigrant families are distressing, but learning an innocent child's perspective of what's happening at the border is, simply put, heartbreaking. Following recent reports of overcrowded and unsanitary conditions found in U.S. Customs and Border Protection (CBP) detention centers, drawings by immigrant children of their experiences in custody have been released, serving as a stark reminder of the vulnerable lives caught in the middle of this humanitarian crisis.

Children, between the ages of 10 and 11, recently released from detention were asked to draw what they experienced in custody of CBP. In one of three drawings shared with Romper by Bay Area Border Relief — a humanitarian organization that works with the Humanitarian Respite Center of Catholic Charities of the Rio Grande Valley in McAllen, Texas, where the children were visiting — you can see five people, some drawn with sad faces, behind what looks like bars or a cage as guards in hats stand outside.

Dr. Sara Goza, incoming president of the American Academy of Pediatrics (AAP), recently toured two CBP facilities and told CBS News she would describe what she saw "almost like dog cages with people in each of them." Goza also told CBS News the children she saw at the centers had "no expression on their faces, there was no laughing, there was no joking, no talking."

In another drawing, a child sketched out five people, perhaps depicting other children, covered in blankets while one guard sits near them and another stands in front of an exit.

"[The kids] said they would lay under these mylar blankets and were yelled at [by guards] ... they were threatened," Lilli Rey, founder of Bay Area Border Relief, tells Romper. She says kids who've come to the Catholic Charities Humanitarian Respite Center in McAllen have recalled guards telling them to "stop talking" and to "stop moving."

"These are 10- and 11-year-old kids, all they could do was lay under these blankets, on concrete floors," Rey says. "And they also keep the lights on 24/7, so nobody knows whether it’s day or night."

The third drawing depicts even more cage-like conditions, showing bars and what could be two toilets next to each other off to the side. According to TIME, the AAP said these three drawings were sketched out by a 10-year-old boy from Guatemala, an 11-year-old girl also from Guatemala, and another 10-year-old child whose country of origin was not identified.

Dr. Colleen Kraft, immediate past president of the AAP, told CNN that "when a child draws this, it's telling us that child felt like he or she was in jail." (Romper's request for comment from CBP regarding the drawings was not immediately returned.)

This isn't the first time such a comparison has been made. Though it's not clear which detention facilities these children were coming from when they arrived at the respite center in McAllen, the Associated Press reported in 2018 that at one facility in South Texas "hundreds of children" were waiting "in a series of cages created by metal fencing." And one of the cages AP reporters witnessed at the time had "20 children inside" it.

A recent report from federal investigators detailed shocking conditions observed inside detention centers. Dated on July 2, the Department of Homeland Security's Office of Inspector General released a memo urging the Department of Homeland Security (DHS) "to take immediate steps to alleviate dangerous overcrowding and prolonged detention of children and adults in the Rio Grande Valley."

Beyond the inspector general's memo, there's been several other reports of filthy conditions and cold temperatures in detention centers. According to the Associated Press, Dr. Dolly Lucio Sevier, a pediatrician, said the center she visited in McAllen was comparable "to a torture facility."

President Donald Trump hasn't offered comprehensive solutions to the appalling conditions migrant children and their families in detention centers have experienced. Rather, on July 3 he said on Twitter: "If Illegal Immigrants are unhappy with the conditions in the quickly built or refitted detentions centers, just tell them not to come. All problems solved!"

This humanitarian crisis, however, is complex and not only requires a more realistic approach, but it also requires a sense of empathy. There's a multitide of reasons people, families, and children make perilous treks to cross the border and seek asylum in the United States. For instance, in Guatemala, where some of the children behind the drawings hail from, gang activity and violent crime, such as murder, are "common" and "widespread," according to the U.S. Department of State. And the rate of those living in poverty in Guatemala is also very high, according to The Borgen Project. As such, simply saying "if you don't like it, don't come" is not a practical answer to these complex problems.

Advocates and pediatricians are also greatly concerned about the trauma these children are experiencing, and illustrations like these provide those helping with a better understanding of what they've gone through. Rey tells Romper these children's drawings are insightful and kids who come to the respite center can partake in art therapy. "[It's] such an easy form to get children to be able to express themselves," she says.

Indeed, Dr. Marsha Griffin, a pediatrician and spokesperson for AAP, told TIME this form of expression is not only important, but it's incredibly telling. "Whether they have the words to tell someone their story, they can tell their story by what they draw," she told the publication. "I think if you hear a child’s voice or a child’s depiction of what they’ve just been through, it can possibly awaken the consciousness of this country... What these children are experiencing is extraordinarily traumatizing and it can be seen immediately and it can be seen years later."

Seeing such illustrations is disturbing, but it should serve as an impetus to address this humanitarian crisis with urgency, thoughtfulness, and compassion.