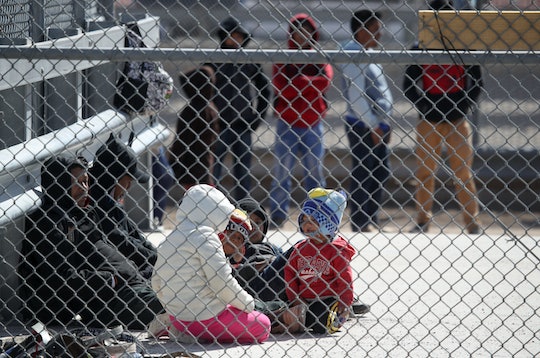 Amid an ongoing and challenging humanitarian crisis at the border, the Trump administration announced plans to replace an old immigration policy with a controversial new rule. On Wednesday, Aug. 20, officials for the Trump administration detailed plans for a new rule l that could allow immigrant families to be detained "indefinitely," as CNN reported. Critics have quickly out against the new rule, calling it "cruel."

Acting Secretary of Homeland Security Kevin McAleenan explained in a news conference today that the Trump administration is moving forward with a new rule to detain families together indefinitely in a reported effort to reduce the number of migrant families crossing the border, as The New York Times reported. The new rule would ostensibly replace the Flores settlement, a decades-old law that prohibits children from being detained for longer than 20 days in a non-licensed facility, according to The Washington Post. McAleenan explained in the press conference, per CNN: "By closing this key loophole in Flores, the new rule will restore integrity to our immigration system and eliminate the major pull factor fueling the crisis."

The Trump administration's new proposal — called the "Flores Final Rule" — hopes to grant licensing authority to the government thereby giving them the ability to hold migrant families for the length of their court trials, according to The Hill. Families would be held together in "licensed facilities or facilities that meet ICE’s family residential standards, as evaluated by a third-party entity engaged by ICE," the Department of Homeland Security said in a statement. Romper's request for further comment or further statement from DHS was not immediately returned.

In a series of tweets on Wednesday, McAleenan noted that this proposed amendment to the Flores settlement — which was initially established in 1997 as a means of limiting the amount of time a child can spend in a detention facility, according to Human Rights First — is an attempt to curb the increase in immigrants and asylum-seekers crossing the U.S./Mexico border. Particularly those who are crossing the border with children.

"It will help address the dramatic 469% increase this year from the record number of family units apprehended in FY18," McAleenan wrote on Twitter. "The incentive to cross the border illegally with a vulnerable child must come to an end."

Immigrant rights advocates have quickly spoken out about the new rule. For example, the American Civil Liberties Union (ACLU) wrote in Twitter on Wednesday that the "government should NOT be jailing kids, and certainly shouldn’t be seeking to put more kids in jail for longer. The ACLU said the new rule is "yet another cruel attack on children, who this administration has targeted again and again with its anti-immigrant policies. Congress must not fund this."

Additionally, Denise Bell, a researcher for refugee and migrant rights for Amnesty International, issued a statement on Wednesday, calling the "new regulations are extraordinarily cruel."

"It is beyond logic and humanity to attempt to keep children locked up for as long as possible, especially when we know that this subjects them to trauma and extreme distress," Bell's statement continued. "Children who have already endured violence and persecution would be harmed even further by this policy."

RAICES Texas, an immigration legal service non-profit, also wrote on Twitter that this rule was "cruel beyond imagination."

This isn't the first time the Trump administration has attempted to enforce severe border control policies in the past few years. Most notably, in 2018, the government drew widespread national and international criticism for a policy of separating migrant families at the border, according to TIME, while President Trump himself has been a vocal critic of the 1997 Flores settlement's limitations on detaining minors. And like past policies and proposal, this new rule will almost certainly be challenged in court.