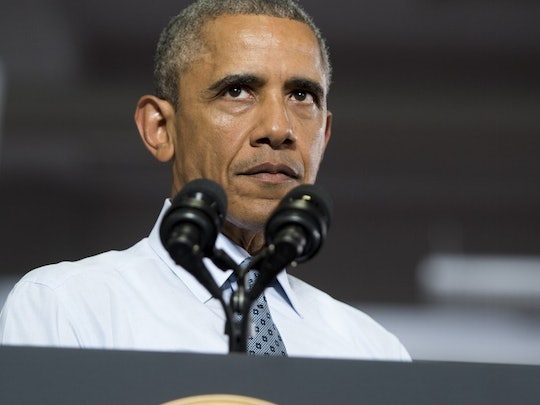 In A Counterterrorism Address, President Obama Asked Americans Not To "Give In to Fear"

In a press conference from the National Counterterrorism Center in Washington, D.C. on Thursday, President Barack Obama said there were no credible terror threats to the U.S., according to CNN. He assured the American people that the people working on counterterrorism efforts in the U.S. "are the best."

The speech comes on the heels Obama's Dec. 6, which he made just days after the San Bernardino shootings, now recognized to be an act of terror. Since then, Obama’s counterterrorism strategies have fallen under heavy criticism these days, particularly because of San Bernardino, and the unfortunate timing of his assertion that ISIS was “contained” just one day before the group committed the Paris terror attacks that killed more than 100 people.

GOP presidential hopefuls in particular are having a field day picking him apart in the media. Retired neurosurgeon and 2016 GOP candidate Ben Carson called Obama’s assertion that his policies were working “strange,” adding, “one must wonder who has contained who,” according to CNN. Florida Sen. Marco Rubio called Obama “completely overwhelmed,” and Donald Trump tweeted a whole bunch of insults, because of course he did.

On Thursday, Obama answered Republican critiques that he hasn't been strong enough on terrorism by being firm and speaking directly to those who might be plotting attacks, according to CNN:

If you target Americans, you will have no safe haven. We will find you and we will defend our nation.

He also maintained that his counterterrorism task forces are in control, according to a live White House feed of the event:

What the world doesn't always see are the successes; those terrorist plots that have been prevented. And that's how it should be.

Obama spent much of the speech championing the staff of the NCTC, as well as law enforcement: "We should not forget how good these patriots are. Over the years, they have taken countless terrorists off of the battlefields. They have disrupted plots. They have foiled attacks. They have saved American lives." He also said many of them would be giving up their holidays and time with their families to ensure that Americans remain safe.

Obama touched on the San Bernardino shooting more than once, pointing out that smaller terror groups, or individual terrorists, are by their nature harder to detect, and therefore harder to prevent. He mentioned that an inquiry he ordered into the so-called "fiancée visas," like the one used by Tashfeen Malik to gain entry to the U.S., was still ongoing.

He also had some words for those who are concerned about the possible risks of allowing Syrian refugees into our borders, reiterating that refugees receive "the most intensive scrutiny" of anyone entering the country, including two years of vetting and biometric screening.

Moving forward, the president said, "we cannot give in to fear," because that's the goal of terrorists. "If we stay true to our values, nothing can beat us." He closed his speech with optimism: "We will not be terrorized. We've prevailed over much greater threats than this. We will prevail again."

More Like This
The President Of Ireland Wants To Get Rid Of Homework & Honestly, He's Onto Something
Jinger Duggar Was Taught Motherhood Defined Her — & Then She Broke Free
Husband Of Massachusetts Mom Accused Of Killing Children Asks Public To Forgive Wife
Kate Middleton Joined Her Brother James At Therapy As He Grieved The Loss Of His Dog
What Parents Are Talking About — Delivered Straight To Your Inbox