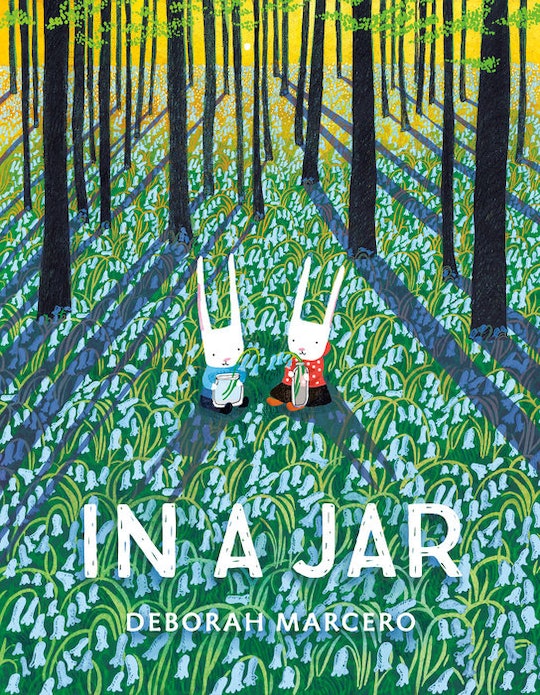 The Book That Bottles Those Childhood Moments You Already Forgot

In general, I'm a happy person. I take pictures of the way the sky looks while I'm taking out the trash, I pay attention to the weight of my sleeping children as I carry them to bed, I sit outside just to listen to all of the noise around me — the school bus, the birds chirping, the leaf blower three doors down. I want to capture all of it. I want to open it at my leisure, share it with my children, empty it out on a table and just marvel at it all, knowing the best moments are destined to slip through my fingers no matter how hard I try to hold on.

This is the idea behind Deborah Marcero's touching picture book In a Jar (out January 21 from G.P. Putnam's Sons Books for Young Readers), which manages to capture something tricky and fleeting for both parents and kids.

"Llewellyn was a collector. He collected things in jars," the book begins, and we're all immediately on a journey. Llewellyn is a little bunny who wants to capture everything around him, from the falling leaves in the woods to the sounds of night. When he meets his new friend, Evelyn, he shares a jar with her, one he filled with a sunset painted "the color of tart cherry syrup." When Evelyn takes the jar home, it glows all through the night "with the memory of that sunset," Marcero writes. And together, the two little bunnies begin collecting all sorts of things. Things that were hard to hold, and things that wouldn't normally fit in a jar, like rainbows and the sound of the ocean, and the newness of spring.

When Evelyn moves away — a moment of genuine loneliness in Marcero's emotive landscapes — Llewellyn begins collecting the things around him so he can share them with her.

He mails her jar after jar of the starry skies and golden leaves of autumn, and in turn, Evelyn sends him back her own jars of her new home. They share the world with each other, all of the little things that often go unnoticed, and they find joy and love and friendship there. Like saving a heart-shaped seashell for your grandmother, pointing out a bright neon ice cream sign to your toddler, rolling down the windows at a red light so your kindergartner can hear every train whistle as it barrels through town.

Layers and layers of memories piled together so tightly I have to unwind everything just to see.

In a Jar is a love letter to noticing, to saving, to cherishing. But it's also a love letter to sharing. There are few things more joyful in the world than my 5-year-old Alice asking me to tell her about that time she got a trampoline for Christmas and how she called herself Tigger. Or when she asks me to tell her the story from my own childhood of a mouse in my grandparents' home that managed to eat its way through an entire package of biscuits and steal the peanut butter from a trap without getting caught. "And your granddad tried to see if the trap worked, didn't he?" She asks me, her eyes lighting up. "And the trap clamped down on his finger, right? And he said 'YOWWWW!'" Right, I tell her, and I think about the story again, about how safe I felt in my grandparents' home, about the tiny ceramic mice Granny Ena had on top of the TV, and how she would make me porridge with extra sugar.

I think about hearing the mouse run across the landing as I slept in my mother's childhood bedroom, peering out the open window into the dark, starry sky, and all of it is here, in my jar. If it had a label, it would just say That Time There Was A Mouse At Granny & Granddad's. But inside that jar are so many other little jars. Layers and layers of memories piled together so tightly I have to unwind everything just to see. Things that were hard to hold. Things you wouldn't think could fit in a jar.

Parents are told to cherish every second. People are told to notice the beauty in the ordinary. The entire world is told to be grateful. But all of that advice can be hard to implement when you're grumpy and you're tired and you're sad. But if you have a jar, if you can bottle up the taste of that first sip of coffee and that first azalea blooming in your backyard and the soft pink of your daughter's first ballet leotard, you can save it for later. And, like Llewellyn and Evelyn, you'll find that it glows all night.

In A Jar is available from all booksellers on January 21.

More Like This
Can Elderberry Help Prevent Illness In Kids? Doctors Weigh In
The Best Halloween Family Pajamas To Match Your Boos
What Is RSV?
Tips For Apple Picking With Kids