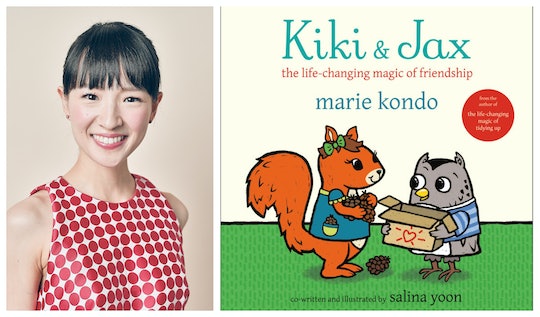 When everything in someone's wardrobe is turned out into a pile, it takes on the shape of a monster: a presence in the home that impacts relationships, mood, self. Marie Kondo's life-changing magic has been the ability to help people tidy away the baggage, to make room for the good and simple things, and her new children's book Kiki & Jax: The Life-Changing Magic Of Friendship (Crown), illustrated by Salina Yoon, performs this trick for toddlers.

"When you have too many things, when you're surrounded by too many things, it makes it all the more difficult to understand what's truly important to you," explains Kondo to Romper via her translator Marie Iida in a sit-down interview. The book illustrates this as Kiki, a packrat squirrel with a messy house, finds there is no room to play with her friend Jax, an owl who loves a good "home edit." The clutter gets physically in the way of their friendship. It's a parable, but it's also real life: No one loves clutter more than young children. Viewed from a distance, their lives float along like one of Mike Kelley's cobbled-together toy installations.

As viewers of Tidying Up With Marie Kondo will know, both of Kondo's daughters, who are 3 and 2, love to fold using the KonMari method (in thirds, such that each item can stand on its end), but retain the ability to cause chaos. "My oldest daughter definitely is Jax," the tidy one, says Kondo, "my youngest, she has an element of Jax, but she comes to lean as time [goes on] to Kiki."

You, like Romper, may have two Kikis in your home determined to upend the storage bins as they move through the house rather than put away. Where we go wrong in selling kids on tidying up, says Kondo, is in the idea that play involves making a mess, and cleaning up is the come-down.

"When I fold clothes, people often tell me that I look like I'm having such a great time," Kondo says in a delicate, crisp voice that compels me to tidy up my own enunciation. "And I think that's one of the reason why my daughters became curious about ... the tidying process and they wanted to help me as part of play." Her enthusiasm had that effect on me: I spent two days in early 2019 clutching tiny trapeze dresses from Forever 21 to my chest to feel for a "ping" and, one by one, bidding them farewell.

Kiki & Jax positions folding as a fun activity laid out in a diagram at the end of the story — a kid-appropriate adjunct to The Life-Changing Magic Of Tidying Up, Kondo's original best-seller.

Oftentimes the mother is responsible for a child appearing as well as working outside the home.

It is worth asking if there will be an edition adapted to the lazy husbands identified in the Netflix show — after all, the piles of stuff threatening to tumble down are symptomatic of greater problems in American households. "I empathize completely," says Kondo, with the mothers tasked with folding the physical and greater emotional phenomena of a family. "Tidying is something that's necessary for everyone as long as they live under the same roof."

The tendency for women, and mothers especially, to perform the emotional and domestic labor at home doesn't strike Kondo as uniquely American, as much as universal. "What I noticed [in the U.S.] is that oftentimes the mother is responsible for a child appearing as well as working outside the home, especially for working mothers," she says in a discussion about the ways clutter impacts our relationships. "And I always, always thought that this was a problem that was unique to Japan."

As Kiki searches hopelessly for a ball in her messy bedroom, the holiday season is approaching in the world beyond the book, and with it the threat of more stuff.

Kondo notes that in Japan, parents typically only buy a single present for their children at Christmas. "It's a wonderful thing to give and receive so many gifts," she says, "but I think it's also important to teach your children to cherish what they already have and cherish the belongings that they do have right now."

I think what's important is to first acknowledge how sad and accept how sad it is and how disappointing that is.

A tenet of the KonMari method is clutching an item to determine whether it sparks joy, and saying thank you and goodbye if it does not. It would take my son his entire childhood to clutch every metal train, treasured yellow spatula and item of plastic fruit to his chest to see if it sparks joy. But what do you do when the thing that sparks the most joy in the world is lost? At the time of publication, Bunny, who belongs to this reporter's daughter, was missing.

"My youngest daughter, also lost her... in her case, it was the stuffed sheep that she loves. It was very sad," nods Kondo. "I think what's important is to first acknowledge how sad and accept how sad it is and how disappointing that is. But afterwards, I think simply reflecting on the good times that you did share with your lovey and to verbalize how grateful you are and to say goodbye in our hearts."

Once a bit of a workaholic, Kondo is not immune to the life-changing power of KonMari herself. "After I became a mother, [I realized] my children are so precious to me and so is the time I spend with them," she says. "So in that sense, I started to really feel how much my private life sparks joy for me."

Now based in Los Angeles, she will be leaning into the U.S. tradition to give lots of presents to her children this year. But her favorite cultural dynamic is perhaps the emotional excess that accompanies our well-documented love of stuff: "We hug our kids on a daily basis and verbally tell them that how much we love them.

Kiki & Jax: The Life-Changing Magic Of Friendship is out now from Crown Publishing Group.