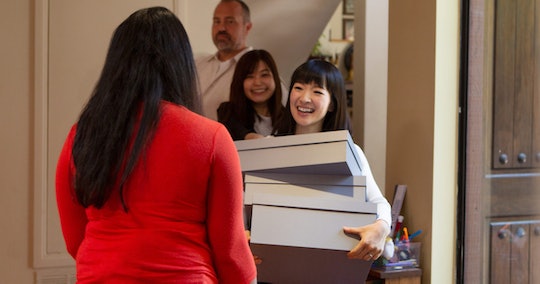 Why Can’t We KonMari The Lazy Husbands

If you haven't already stuffed half of your house into black garbage bags and stored the rest in neat, vertical folds, I'm going to assume you haven't caught Tidying Up With Marie Kondo on Netflix yet. The series, which is sweeping the country (and by sweeping, I mean clearing a pathway through our nighttime routines), follows Marie Kondo teaching frazzled Americans her KonMari method of tidying up to get their house in order. The method includes holding up individual items in your home, whether it's a pair of pants or a picture frame, and determining if it "sparks joy." If it doesn't, the item is gone (after you sweetly thank it for everything it did for you), but if it does give you that PING! that Marie describes, then it deserves to stay in your home. Which means on more than one episode of the series, I fully expected the featured mom to shove her husband into a cardboard box marked "Goodwill."

As a parent and a wife, I obviously related most to the episodes that involved a couple with kids. A quick pan of their kitchens looked like mine on any given day — to-go containers cluttering the counters; random items like loose batteries, empty cups, and toys stuffed by the sink; cabinets half open and items spilling out of drawers — but the exhaustion and embarrassment in their eyes? The way they had to dig through laundry to find the shorts their husband wanted? The excessive need to explain how the mess all got this way? Yeah, I related to that, too.

The first episode was one of the worst. It was obvious that Rachel, a stay-at-home mom to two young children (one still breastfeeding), felt like the mess and clutter of their home was all on her shoulders — but unfortunately, it seemed like her husband Kevin felt the same way. From the very beginning of the episode where the two introduced themselves and Rachel fell over herself trying to take on the blame — "He's much cleaner than I am," she says at one point, while Kevin mouths behind her, "a lot" — to watching Rachel cry several times throughout the episode, it's obvious the entire house and its upkeep was on her.

In fact, it takes less than 10 minutes into the episode to hear about the laundry. Rachel, who is staying at home to take care of two small children, confesses that she hates laundry, so she's hired someone to help her do it. Her husband's response? It "really, really pisses" him off. Kevin goes on to explain that it's not like he "expects" her to do the laundry and take care of the kids — oh god no OF COURSE that's not what he's saying, babe, but he just wants them to sit down and do it together as a family. (???)

OK, babe. Well, the laundry hamper is waiting for you.

Twenty-two percent of men did housework on an average day, compared to 50 percent of women.

And that one scene right there, along with all of the other truly uncomfortable scenes that included Rachel getting quiet and embarrassed as her husband ranted about how the house makes him feel, were just in one episode. In later episodes, there's a couple with a husband getting agitated that his wife can't get rid of stuff and that she's too "sentimental" about kids' toys, while another mom cried about how she's the mom, so she knows that it's expected of her to be the organizer, the homemaker, the one who knows where literally everything in the house is.

Basically? Tidying Up is just one big giant show about how dads really aren't pulling their weight.

This is nothing new. There are thousands of articles and memes and comics circulating the internet at any moment about the not-so-harmonious balance of housework between men and women. A 2015 survey from the Bureau of Labor Statistics found women doing almost an hour more of household activities than men a day on average. The same survey found that 22 percent of men did housework on an average day, compared to 50 percent of women.

But babe, why is the kitchen such a mess? And why are we outsourcing the laundry? Why does your husband have to call you because he can't find his shorts?

Maybe because he's not doing a damn thing. How do you effortlessly fold up this kind of patriarchy, Marie? Will it also stack neatly in a box in my closet?

The lazy dads of this show are truly where you should be focusing your attention. I love Marie Kondo. I love her methods. I love the idea of a home that sparks joy everywhere I turn. But I don't love that the women are the ones crying because they are so exhausted. The women are the ones having to put forth most of the effort. The women are the ones explaining why their house is cluttered, feeling guilty for the "state" of their own home — you know, the home they live in with a partner who should do more than just smile and nod next to them.

It's emotional labor — a loaded phrase that is debated week in and week out in think-pieces around the web — and it's literally draining the women of this show. None of the dads are piping up to say how they could do more to help around the house — they're all just waiting for Marie to teach their wife to clean up the kitchen already.

Learning to fold your clothes so they'll fit neatly in your drawers is noble, and keeping items that make you happy to be in your home is a worthwhile project, too. Nobody can deny the magic of the KonMari method and how it helps your house feel like your happy place. But can dads also watch these episodes and realize that doing a load of laundry each day could spark some joy for everyone? Could they see that their wife is literally drowning in the crap their children bring into the living room every day and that their two arms are just as capable of cleaning up LEGOs as hers? Will they, for just one tiny moment, imagine all of the work it takes for their wives to know where every item in the kitchen is and just decide to look for the spatula themselves?

Because they can't keep doing it alone, babe.

More Like This
Marie Kondo Gives Up Tidying Post-Kids, Sparking Joy For Moms Everywhere
Mom On TikTok Asks Daughters Why They Want To Be Boys & Same, Girls, Same
What Is Emotional Cheating? Experts Explain
Why You Should Go Ahead And Have That Fourth Baby
What Parents Are Talking About — Delivered Straight To Your Inbox