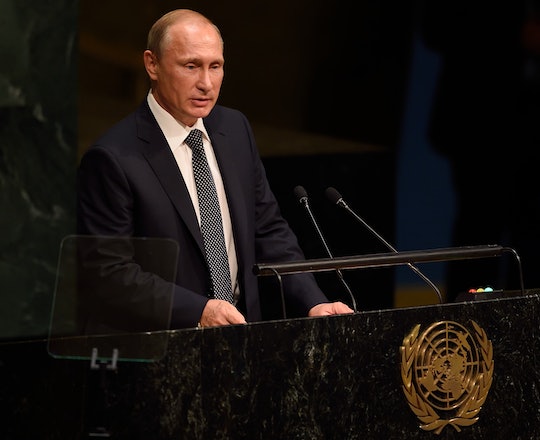 Following the Metrojet crash that killed 224 people, President Vladimir Putin is recommending Russian flights do not fly to Egypt. The Russian President's decision comes five days after Flight 9268 was downed in central Sinai, a region known for its level of unrest, and several days after many other airlines, like Lufthansa and Air France-KLM, opted out of flying over the region. The U.K. also decided to suspend flights from Sinai airport.

Said Russia's Federal Security Service Director Aleksandr Bortnikov prior to Putin's decision, "As long as we haven’t established the causes of the incident, I consider it appropriate to suspend the flights of Russian aircraft to Egypt."

It's a shift in attitude from Russia following the tragic crash, even if Putin is still not attaching blame to anyone. Up until yesterday, both Russia and Egypt were denying claims that a bomb took down the plane, saying that determination was still premature. (Said Putin's Press Secretary Dmitry Peskov, "Only the investigation may put forward some theories of the accident. We haven't had any statements from the investigation so far.")

But it seems Putin has changed his mind about who and what exactly could have been responsible, just hours after a phone call with UK Prime Minister David Cameron seemed to do nothing to sway the Russian president. So what's responsible for the shift? Reports indicate that a meeting with Russian security authorities made up Putin's mind.

Though Putin reportedly didn't want to suspend flights to avoid heading head-first into a conflict, it's still unclear exactly what happened on board the Metrojet flight. ISIS had immediately claimed responsibility for the attack, something that was initially shot down by officials, but is now seen to be more legitimate. That's because theories as to what brought down the plane shifted from a missile (which wouldn't have reached the plane at over 30,000 feet) to a bomb inside the plane. Both Cameron and President Barack Obama have fueled the latter theory, with Obama saying "it's certainly possible."

In the meantime, while investigations continue, U.K. tourists stuck at Sharm El-Sheikh airport are still attempting to get home. And attempts to keep another attack from happening are beginning, with U.K. officials meeting with Egypt President Abdel Fattah el-Sisi to talk about the threat of ISIS. Said UK Defense Secretary Michael Fallon:

Our partnership with regional allies is vital as we work together to defeat the evil terrorism inspired and direct by terrorist organisations such as ISIL. The UK is committed to standing shoulder to shoulder with Egypt as we fight for a more secure future for the Middle East.