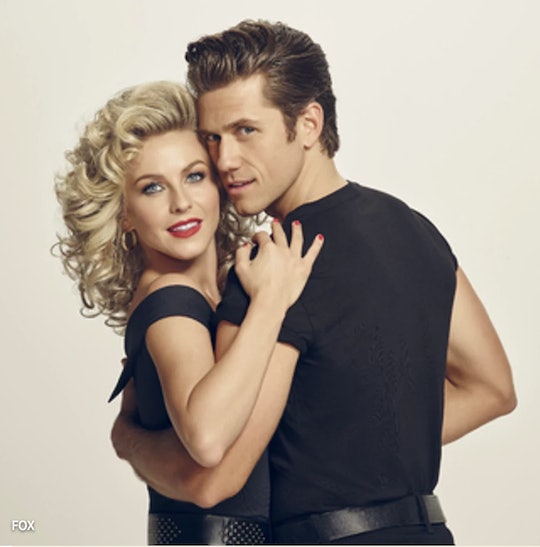 In What Time Period Is 'Grease' Set? Poodle Skirts Were Everywhere

Although both the famous musical and film adaptation of Grease came out in the 1970s, it's still popular enough that Fox deemed it worthy of a revival. On Jan. 31, fans can catch Grease: Live — a made-for-television adaptation of the musical, complete with a cast of young Hollywood stars like Julianne Hough as Sandy, Vanessa Hudgens as Rizzo, and Carly Rae Jepsen as Frenchy. The updated version will try to keep all of the old Grease charm, complete with period costumes. But what time period is Grease set in?

The musical is about high school students Danny Zuko and Sandy Olsson who have a summer romance while on vacation. Things get awkward once Sandy transfers to Danny's high school at the start of their senior year at Rydell High, and the two struggle to maintain their opposing images in front of their friends — Danny as the cool guy, and Sandy as the good girl — while also trying to impress one another. But don't be fooled by the young, familiar faces in the Fox adaptation — this story does not take place in the present, which is relevant information since some stuff in the film would seem absurd or offensive to us today.

Grease takes place in the United States in the 1950s. The most obvious clue is the name of the musical and the name of Danny Zuko's gang, the Greasers, which both refer to a youth subculture that originated in the 1950s. Also, just take a look at the fashion. Poodle skirts were HUGE among teen girls in the 1950s.

Now, for a brief history lesson. During this time, the United States was still experiencing the baby boom that started in 1946 and resulted in, at its highest, up to 4.3 million births per year. A suburban boom was also going on, as young people flocked to houses in the suburbs to start families since the houses there were cheaper than apartments in the cities — hence the stereotype of the suburban 1950's housewife. However, by no means were the 1950s a particularly good time for women, who, let's remember, were raising a lot of kids at that time. Author Betty Friedan even wrote about it in The Feminine Mystique, demystifying the idea that women in the 1950s and 1960s were happy as housewives.

If this is your first time watching Grease, you might want to keep these things in mind. It's a fun and funny musical with a bunch of familiar faces, but let's remember Grease was set in the 1950s and adjust our expectations about its fictional culture accordingly.