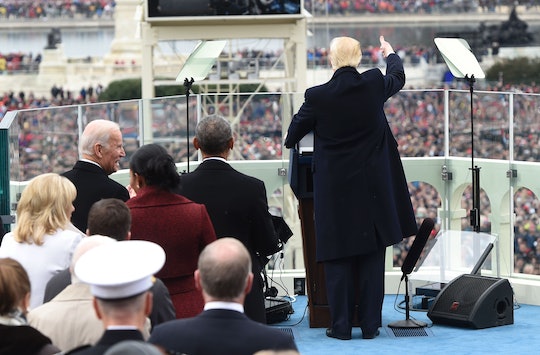 Of Course It Rained During Trump's Inauguration

While past inaugurations have been days of hope and excited expectations for the future, most cannot say they feel that way as they watched Donald J. Trump take the oath as the president of the United States. As if the universe itself knew things were amiss, as President Trump started to speak, it began to rain. The inauguration rain tweets, however, are definitely seeing us through what can only be described as a surreal, scary, and upsetting time for millions of Americans across the country.

The skies were dark and threatening through Inauguration Day. While it rained in the morning, it seemed to dissipate through the traditional Inauguration festivities. However, after Trump put his hand on a Bible and swore the oath of office and took the podium to deliver his first speech as president of the United States, it started raining. Because, well, of course it did. The irony wasn't lost on anyone, especially Twitter users who were using social media (in 140 characters or less) to lament, poke fun, and sincerely share their fears for the next four years.

So, sure, this is a scary time and people are frightened for valid reasons. However, at least we have humor. Here are just a few of the gut-busting tweets about the rain on Inauguration Day:

During the inauguration, Rev. Franklin Graham claimed that rain, in the bible, is a sign of God's blessing. He then hoped that God would bless President Trump and the work he will inevitably do during his term. While I will never downplay anyone else's beliefs, I'm going to lean with Van Jones on this one.

I knew we were turning the clock back more than a few years with this particular inauguration, but I don't think it's fair to evoke the serene and simple years of the '90s. The '90s were better than this, my friends.

Is this particular tweet slightly unfair, giving the fact that the most-recent allegations against now-President Trump have been completely unfounded? Sure. But it is hilarious and giving us a much-needed laugh? You freakin' bet. #SorryNotSorry

Although I cannot (and should not) tell anyone how to handle these next four years, I take solace in the fact that so many people are not only continuing to hold onto their fierce determination to make sure this country remains an inclusive, tolerant, and diverse place, but that we're collectively finding the necessary humor we'll all need in order to make it through.

So have a laugh and enjoy the rain, dear reader.