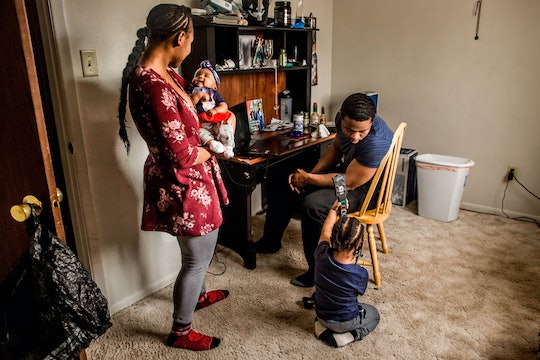 Trying for a baby is lonelier than you think.

“Eight weeks, 13 blood draws, and two trips to the emergency room later, I am still actively miscarrying,” wrote Alyssa Himmel, 30, of Columbus, Ohio, of the slow process by which she lost a pregnancy in early 2018 and waited to be able to try again.

Across the country in Seattle, Wash., Jessie Glockling, 31, was also “trying” but hadn’t had a period in over a year. A diagnosis of polycystic ovarian syndrome (PCOS) gave her infertility a name but left her in limbo. So much of trying to conceive is about waiting for a window in which you can actively do something to pursue that goal.

We don’t have good language for the state of wanting to have kids but not yet having them. “Expectant” parents are already well on the way, “prospective” adoptive parents have their binders sorted and color-coded, “intended” parents using egg donors and gestational carriers have attentive coordinators. But a person who is trying to conceive themselves, sees themselves as a parent in the future, and likely will become one — but is not there yet? We do not have a name for them, even though 12 to 13 percent of couples have trouble becoming, or staying, pregnant, per the Department of Health & Human Services.

Romper, as a site specifically reaching millennial parents — millions of them, actually — wanted to cover that experience, rarely explored in depth by parenting sites, so we recruited five people and called them the “Try-ers.” They were five women, all trying to conceive, all with different backgrounds and different complicating factors. We imagined we could lift the lid on infertility by focusing on the shared, lived experience, rather than the baby tally.

But we learned it’s impossible to talk about infertility without looking at the way we cordon off those still trying from those who have succeeded.

Ambreia Meadows-Fernandez, a 27-year-old mother of one from the Rockies, conceived virtually at the kickoff of the project. Himmel followed suit a few months afterward. Dese’Rae L. Stage, 35, was the next to watch her human chorionic gonadotropin (HCG) hormone levels rise, day on day, after a round of IVF.

That left Jessie Glockling and Jackie Noblett, a married woman from Florida.

As one Try-er, and then all the Try-ers, got pregnant, it was clear that pregnancy amplified their emotional and physical challenges rather than resolved them.

Infertility itself is broadly defined as the inability to get pregnant after one year of trying, so pregnancy, in a sense, is the cure. Many of the diagnoses women are given for conditions affecting their ability to conceive — hypothalamic amenorrhea (the cessation of periods due to low hormone production), PCOS, and secondary infertility (an inability to conceive after successfully bringing a child to term) — are what doctors call ”diagnos[e]s of exclusion,” essentially diagnoses settled on when no better explanation can be found.

But as one Try-er, and then all the Try-ers, got pregnant, it was clear that pregnancy amplified their emotional and physical challenges rather than resolved them. Fertility drugs could override problems with ovulation, but the months after conception were universally a time of anxiety, and for some Try-ers also a time of depression.

The incidence of prenatal depression (14-23 percent of women) mirrors that of postpartum depression (5-25 percent of women), per the American College of Obstetrics & Gynecology, but even the language of maternal well-care itself is premised on birth as dividing line or catalyst, with everything before birth experienced through optimistic, #blessed lenses.

Part of the reason it has taken so long to recognize the prevalence of depression and other mood disorders during pregnancy, and indeed during fertility treatment, is that the best term available in the past — postpartum depression — implied the condition was intrinsically linked to some kind of post-birth alchemy.

“I can’t help but think that part of how and why we are all now so interested in postpartum depression is, first of all, it’s the only language that we have to discuss this stuff,” Dr Alexandra Sacks, M.D., told Romper previously.

Dr. Sack’s work demystifying what are better termed “perinatal mood and anxiety disorders” (PMADs) has focused on the concept of “matrescence”: the transition to motherhood and the emotional shifts that transition entails.

Matrescence also encompasses the time when a person is emotionally ready to be a parent but missing a crucial piece of the puzzle — a child. Indeed, the effects of infertility sweep through to parenthood: IVF was linked to a higher rate of postpartum depression in a study of 60 women published in the Journal of Midwifery & Women’s Health. Miscarriage has also been linked to depression, per the Massachusetts General Hospital Center for Women’s Mental Health.

We think about trying to conceive as a physical challenge, but it is equally an emotional undertaking. People who have dealt with infertility know this intrinsically.

Stage, of Washington, D.C., began her year with an early miscarriage the same week her wife Felicidad delivered their firstborn, Gus. The aftermath of Fel’s birth was traumatic, and Stage wasn’t sure she did still want to try. She also felt the frustration of seeing peers in the trying-to-conceive phase move on.

“Someone would come back from an egg retrieval with a ton of eggs, and instead of being excited for them, I'd think, ‘Psh, why are they even here?’" She wrote of seeing pregnancy announcements in her fertility group on Facebook.

And that is the final challenge: we need to work to include those trying for children in the realm of parents, to give their emotional experience better consideration in any discussion of what it takes to have a baby, and we also need to respect their need to leave that discussion.

Each time a Try-er became pregnant, she moved to the other side of a divider.

Early in the project, Glockling wrote about “unfriending” someone on Facebook after seeing their pregnancy announcement. Months later, when Glockling conceived after a regime of medroxyprogesterone to regulate her female hormones, multiple rounds of clomid, metformin, and letrozole, plus a “trigger shot” to induce ovulation, she agonized over the best way to break the news to the people who formed her wider support system, hopeful that they would be happy for her.

Later, she wished she had added a trigger warning to the announcement.

The project gave five women an in-built support group, and each found meaningful support in each other, and in the readers who followed along and reached out. But each time a Try-er became pregnant, she moved to the other side of a divider.

We didn’t want to keep score of the babies in a project focused on trying, but a year on, all five women either have newborns, or are expecting (the last to conceive, Jackie Noblett, 33, is carrying triplets conceived through intrauterine insemination, amid hypothalamic amenorrhea and an eating disorder). This flies in the face of the statistics: just under a third of women under 35 undergoing assisted reproductive technology will have a live birth within a year, per 2015 CDC data. The Try-ers themselves have left behind those other two thirds whose struggles they once shared.

We wanted to keep the focus on infertility — that slippery, vague in-between state — and ended up talking about the Try-er’s journeys as mothers. It’s not what we set out to do, but it’s also unsurprising.

Motherhood is the phase we have a good name for. — Janet Manley, Deputy Editor