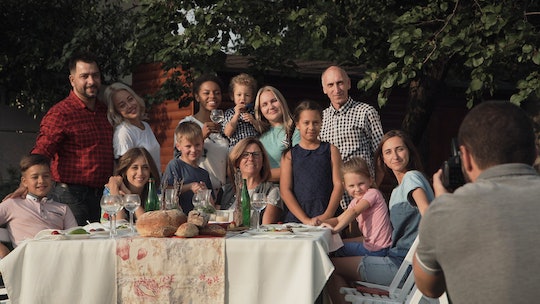 The familial bond between cousins is, well, not weird exactly, but wholly unique. A cuz is not a sib, but also not just a rando bud. You are bonded by blood, but the degree of your closeness can vary greatly. My kid adores his cousins on both sides of the family. Cousins are his jam. I have a million pics of him with an arm slung around a cousin, his smile beaming. The pics are adorable, though I am often left pondering how to properly create Instagram captions for cousin pics. How to capture that special, bizarre bond that seems to exist only between a kid and his cuz? I mean, it's nice, but some people (such as myself) grew up barely knowing their cousins and were simply forced to awkwardly stand with other strange children (cousins) for pictures every few years at funerals or Thanksgiving.

Of course some people are extremely close to their cousins, going so far as to exchange marital vows with them. Rudy Giuliani and Jerry Lee Lewis both famously married their cousins. As did Albert Einstein, Saddam Hussein, and Kevin Bacon. (Worst dinner party ever? Best?) Though I should note, Bacon is only distantly related to Kyra Sedgwick. There are actually several degrees of Bacon between them.

But enough of all that. Let's get the image of Saddam Hussein and Einstein doing the "Everybody cut" dance from Footloose out of our heads, and focus, people. National Cousin Day will be rolling up soon on July 24! So what are some awesome Insta captions for cuz photos?