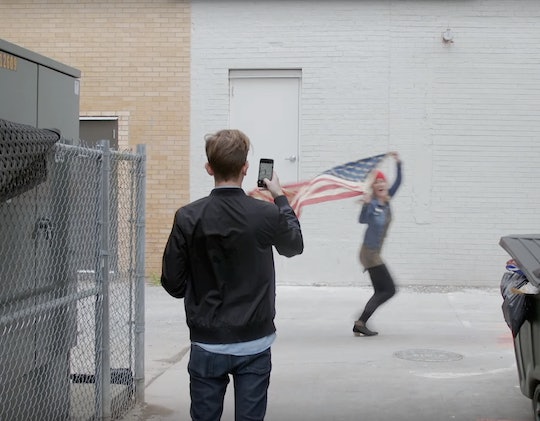 "Instagram Husband" Is Maybe Sexist, Definitely Funny, & We Just Have To Accept Both Of Those Things — VIDEO

As of this year, Instagram has a reported 400 million active users. That's 400 million people uploading photos — mostly of themselves, probably — and using angles and filters to celebrate their appearance. While taking selfies and posting pictures of yourself on Instagram isn't a bad thing at all, the folks at The Mystery Hour have created a video to highlight the downside of some Instagram users: their overwhelming need to get the "perfect" shot for the "perfect" picture and, as a result, turn their friends/boyfriends/girlfriends/husbands/siblings into their personal photographers. The video about "Instagram Husbands" and their curse of forever being nothing more than "a human selfie stick." That struggle: It's real.

Sure, the video is cheeky and pokes fun at some of the ridiculous lengths people will go just to create a picture that makes them look care free and effortlessly stunning. The husband climbing up a staircase to get a higher camera angle definitely earned a few chuckles, and the husband trying to take a picture of his wife while she runs past him with a flag flying behind her was hilarious, I'll admit. And it is obvious that even though these husbands are tired if not (at the very least) annoyed at the never-ending, tedious picture taking, they support their wives and think they're beautiful and want to celebrate that beauty too.

But there are a few problems with the video as a whole and, regardless of how funny it is, they're pretty hard to overlook.

First, the video directly shames women for taking pictures of themselves. For the record, there's nothing wrong with a woman celebrating her beauty or taking the time to feel beautiful and confident about herself. And yet, society is quick to judge and shame women who post pictures of themselves, labeling them shallow and narcissistic and vain.

Obviously, the husbands support their wives and have no problem celebrating their beauty, otherwise they wouldn't spend time taking pictures until their wives approve. (And yes, constantly taking someone's picture is pretty annoying.)

There's also the (somewhat subtle) idea that a woman is only beautiful because of the man who takes the time to make her look beautiful. Sure, the argument that social media isn't real life can be (and has been) made, but women are beautiful regardless of who takes their picture or how they take their picture. A man does not make a woman beautiful. She can, and does, do that all on her own.

Finally, there's the idea that all women only care about taking pictures of themselves and all men couldn't care less about taking pictures of themselves. This is obviously not true, as I know many men who spend plenty of time in front of the camera or worried about a particular camera angle or searching for the perfect Instagram filter. It's also worth nothing that this video leans heavily on heteronormative stereotypes, and definitely does not always fit these particular gender lines.

So yes, there were plenty of hilarious moments in the video, like this:

But it would have been a better (not to mention fair) assessment of our social media culture if everyone and their ridiculous Instagram efforts were highlighted, not just women. Because yes, people who wont let you eat your food until they've taken a million pictures of it, or leave the house until they've done their 17th shoot for 20 minutes are very annoying to hang out with.

More Like This
Endometriosis & Your Sex Life
The Best Couch Sex Positions
Widows Are Expected To Mourn Forever — How Do I Date Again Without Shame?
How To Tell If Someone Is Lying To You: 34 Signs To Watch For