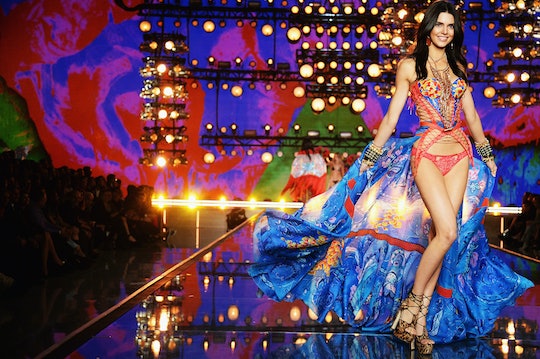 The annual Victoria Secret Fashion Show aired Tuesday night on CBS, giving viewers a behind-the-scenes look at one of fashion's biggest nights. While the format didn't change must from last year — supermodels were still asked questions, talked into the camera, and showcased a more "playful" side of themselves — there was a notably larger emphasis on social media and selfies. (Not all that surprising because, well, it is 2015 and the Oxford Dictionaries Word of the Year was an emoji.)

Though it would have been easy to write off conventionally beautiful women — who are paid to fulfill a certain societal standard of attractiveness — taking selfies and speaking about the importance of Instagram and camera angles, Victoria's Secret did a wonderful thing when they highlighted selfies, and not just for themselves, but for all women in general.

Women are constantly selfie-shamed by a society that demands they be consistently vigilant about their looks. Our culture is quick to pass judgment on a woman's look, feeling entitled to comment on how attractive she may or may not be, only to turn around and shame that very same woman for owning and celebrating or even feeling slightly confident about said looks. According to society, women should be beautiful without trying. We should care enough to wear makeup but shouldn't wear makeup because it's "false advertising." Women, their bodies, and their beauty are used to sell products, but a woman shouldn't spend too much money on those products otherwise she's superficial and vein.

Women are rarely given the opportunity to celebrate their beauty without harsh judgment and condemnation, so to see a group of women celebrating their looks on their own terms in front of an incredibly vast audience, when they want and why they want, is a good thing. No, it's a great thing.

So while some may label it "narcissistic" or "shallow" or a sign of a "disconnected Millennial takeover," I think it is a sign of self-love, self-appreciation, and self-acceptance. In fact, maybe taking a selfie is the purest form of celebration you can award yourself. Lest we not forget that Beyoncé and Nicki Minaj penned a whole song about feeling yourself, reminding scores of girls and women and even men that there is nothing wrong with feeling good about who you are, how you look, and what you feel. And if you choose to display that feel-good love under a national spotlight in front of thousands of fans in person and watching at home, then you do you, girl.

Of course, there is danger in assigning a sense of self-value to the number of likes or comments a particular photo garnishes, but if a woman can post a picture of herself that she believes is beautiful, regardless of what anyone else thinks, then we are teaching women to own their own unique look, and to believe they're beautiful regardless of any external factors, beliefs, or judgments.

Seeing so many selfies during last night's airing of the show helped drive home the point that taking a picture of yourself isn't just something you should do or feel comfortable doing in the confinement of your own home. You can do it anywhere, anytime. In fact: you should do it anywhere, anytime, even seconds before you step onto one of the most heavily watched runway shows ever. It reinforces that a woman's beauty — all women's beauty — is worth celebrating.

So selfie on, ladies.