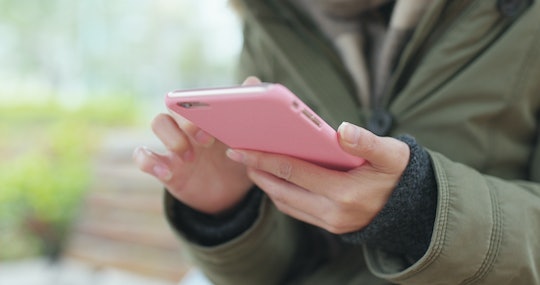 In a world increasingly connected by social media and affected by the spread of misinformation, gatekeepers like Facebook and Instagram are face increased pressure to redirect users to trusted resources. Just earlier this year, for instance, Instagram began blocking certain anti-vaccine hashtags that consistently provided inaccurate information. As for the social media giant's latest move? In September, Instagram launched a new notification from the CDC (Centers for Disease Control & Prevention) to encourage users to seek out trusted sources for information about vaccines.

In an email to Romper, a representative for Instagram says the platform was motivated to work alongside the CDC in an effort to stop to the spread of misinformation and "hoaxes." So when you search for an anti-vaccine related hashtag, for instance, you'll see an educational pop-up window asking you if you'd like to be redirected to the CDC.

"When it comes to health, everyone wants reliable, up-to-date information," the notification says. "The Centers for Disease Control (CDC) has information that can help answers questions you may have about vaccines."

The initiative went into effect in September, a few months after Instagram blocked hashtags in May that promoted false information about vaccines, according to Mashable.

"Earlier this year, we identified that, despite overwhelming consensus among scientific and medical communities on the safety and effectiveness of vaccines, some groups on Facebook and Instagram were spreading misinformation and related hoaxes," a spokesperson for Facebook, which acquired Instagram in 2012, says in a press release shared with Romper via email.

They continue: "Given the stakes around vaccinations, the ways in which misinformation on that topic can mislead people about an important health decision, and how the problem manifests on online platforms, we saw this as a key area where we could do even more than to help safeguard the health of our community."

Facebook took similar steps just last month, when it rolled out an educational pop-out window that appears on the screen every time a social media user searches for vaccine-related information, visits vaccine-related Facebook groups and pages, or taps a vaccine-related hashtag. If users are outside of the U.S., they will be directed to the World Health Organization (WHO) website's vaccine information page.

In an update for the implementation in September, Facebook announced at the time: "We are starting to roll out more ways to connect people with authoritative information about vaccines on Facebook and Instagram."

Furthermore, Facebook banned anti-vaccine related groups and pages from promoting ads, while ensuring that content from those groups will be less prominent in search findings, according to

In response, a spokesperson for CDC praised the initiative in a statement to CNN, saying: "We know that parents often turn to social media to access health information and connect with other parents, and it can be difficult to determine what is accurate and who the credible sources of information are."

These initiatives are important because earlier this year, the number of reported measles cases spiked to a new high since it was eliminated in the United States in 2000. Between January and September of this year, 1,249 U.S. measles cases were reported, the highest annual number since 1992, according to the CDC.

In response, New York City, the largest school district in the U.S., required children to either get vaccinated or leave school, as the state lawmakers decided religious exemptions were no longer accepted in its state of emergency.

Although the measles outbreak was officially announced as over in September, controlling the spread of false information on social media remains just as important to prevent similar outbreaks in the future.