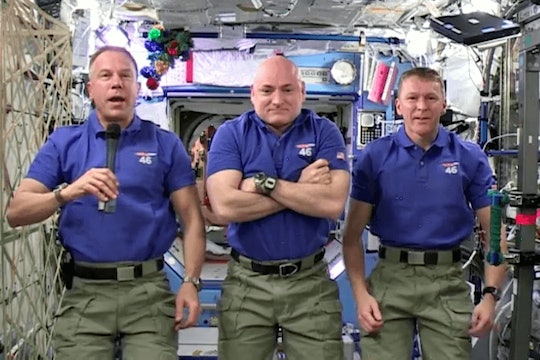 Merry Christmas from space! Astronauts aboard the International Space Station (ISS) sent their Christmas greetings down to us Earthlings below, including some absolutely stunning time-lapse videos taken from space. Onboard the Space Station are Station Commander Scott Kelly and Colonel Tim Kopra from the United States as well as Tim Peake — the first Brit aboard the ISS — as he begins a six-month mission in space. Also on board are three Russian cosmonauts: Sergey Volkov, Mikhail Kornienko, and Yuri Malenchenko.

In a video posted to the ISS Twitter account on Tuesday, Kelly, Kopra, and Peake thanked their teams on the ground for their support as their crew travels 250 miles above the Earth. Peake added that the astronauts will be "sending all our good wishes back down to everybody on beautiful planet Earth" as they orbit our planet 16 times over the course of Christmas day.

Late Thursday night, the ISS Twitter released a breathtaking video of Earth as seen from space. Commander Kelly, along with Russian cosmonaut Kornienko, are currently attempting a one year in space mission; Commander Kelly currently holds the NASA record for the most cumulative days in space. The video features an original musical score by Greek artist Yanni to celebrate 15 years of continuous human presence aboard the ISS:

Kelly released his own video on Christmas morning — a time-lapse video of the Earth in one continuous orbit:

Kopra shared how he brought his Christmas traditions from home aboard with him in space:

To all the astronauts onboard the Space Station, we send our holiday greetings right back to you — 16 times over!