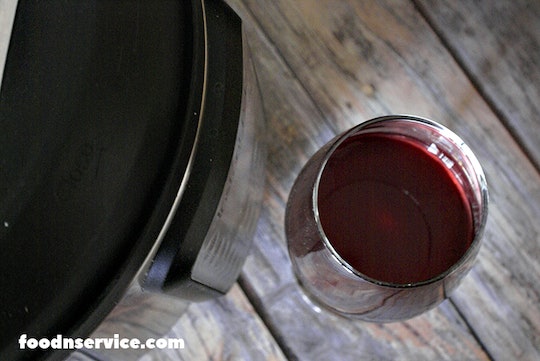 Internet Hero Creates Wine In An Instant Pot, & We Are Not Worthy

He may not necessarily be the hero we want, but he’s definitely the hero we need. Hell, he is the hero we want, if I'm being honest. Food Blogger David Murphy has successfully attempted the Instant Pot recipe dreams are made of — homemade wine in an Instant Pot. I’m going to let that sink in for a minute. Wine. In an Instant Pot. Maybe I’m more excited than the average person because I haven’t had a drop of wine in six months (thanks pregnancy), but this is an exciting time to be alive.

Murphy was inspired by memes he saw floating around social media about someone needing to figure out how to make wine in a crockpot. "I used to laugh every time I saw [these memes] because I wanted it to be so true," he said on his blog. And though it wasn't "hard" to do necessarily, Murphy said it did take some patience on his part — like eight days to a month total for it to finish fermenting and be ready to drink. But it was worth it, according to Murphy. He even "dared to say" it was "better than the 2 Buck Chuck from Trader Joe's."

Bold statement there, Murphy. But I am definitely intrigued and must know more.

On his blog, Murphy said it was important to first sanitize your Instant Pot by mixing a gallon of hot water with a tablespoon of bleach, and then allowing it to sit in there for 30 seconds to kill bacteria before dumping and wiping it out. Then, all you need is a 64 ounce bottle of Welch's Grape Juice, a cup of sugar, a funnel, a packet of "Lalvin Red Wine Yeast" or "White Wine Yeast," if you'd rather, an Instant Pot "with a Yogurt Function," and "clear packing tape."

After dissolving the sugar directly in your Welch's grape juice bottle (but removing one cup of the juice and setting it aside first), you add those contents to the Instant Pot, along with the yeast, and then close and lock your Instant Pot lid. Next, you press the "Yogurt" button and then "Less Heat," and keep your vent open. This will need to run for two days, according to Murphy, while alternating opening and closing the vent every 6 to 8 hours.

Next, Murphy said to transfer your wine juice back into the plastic grape juice container and place the lid halfway on there so it doesn't explode, and then using your clear plastic tape, secure the plastic cap to "aerate" the wine.

Not too bad, right? And now, his amazing Instant Pot recipe has given Murphy some newfound fame. Online blogs and media outlets (including yours truly) have been picking it up all over the place.

So what do we know about Murphy, who is now known as the "Instant Pot Wine Guy"? Not only is he a genius with his Instant Pot, but he's a good human being to boot. He also takes care of his special needs sister, which he chronicles in his blog, his three nephews, and his two dogs. Well, God bless this man for taking the time out of his extremely busy schedule to give us the gift of a wine recipe for your Instant Pot. It's always nice to see something great happen to good people.

And on behalf of wine-loving mamas everywhere, thank you David Murphy. We salute you and toast our homemade Instant Pot wine-filled glasses in your honor. Now I can't wait until I'm allowed to drink again to try this recipe, because it looks and sounds so delicious.

More Like This
Eden Grinshpan On Getting Your Kids To Love Fish Eyeballs (Yes, Really!)
The Best Apple Orchards Near Upstate New York
The FDA Is Worried People Are Cooking Chicken In NyQuil
6 Sex Positions To Reduce Leg Pain